From Infogalactic: the planetary knowledge core
Jump to: navigation, search
For the village in South Africa, see Wupperthal. 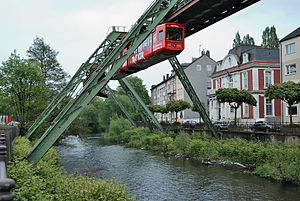 The Schwebebahn floating tram in Wuppertal-Barmen 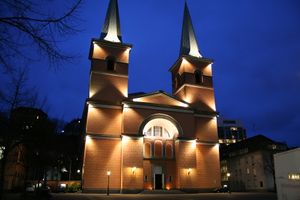 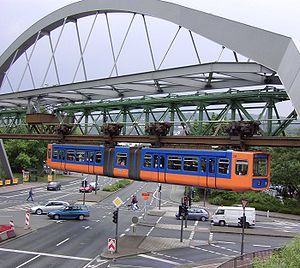 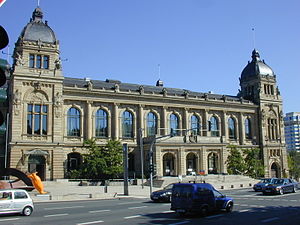 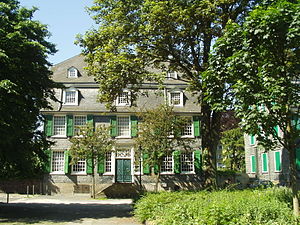 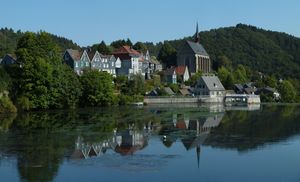 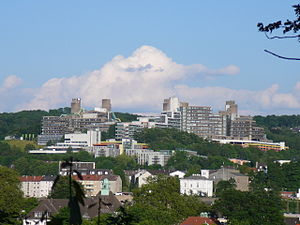 listen)) is a city in North Rhine-Westphalia, Germany. It is located in and around the river Wupper valley, and is situated east of the city of Düsseldorf and south of the Ruhr area. With a population of approximately 350,000, it is the largest city in the Bergisches Land. Wuppertal is known for its steep slopes, its woods and parks, and its suspension railway, the Wuppertal Schwebebahn. Two-thirds of the total municipal area of Wuppertal is green space. From any part of the city, it is only a ten-minute walk to one of the public parks or woodland paths.

During the 18th and 19th centuries, the Wupper valley was one of the largest industrial regions of continental Europe. The increasing demand for coal from the textile mills and blacksmith shops encouraged the expansion of the nearby Ruhrgebiet. Wuppertal still is a major industrial centre, being home to industries such as textiles, metallurgy, chemicals, pharmaceuticals, electronics, automobiles, rubber, vehicles and printing equipment.

Aspirin originates from Wuppertal, patented during 1897 by Bayer, as is the Vorwerk- Kobold vacuum cleaner.[2][3]

The Wuppertal Institute for Climate, Environment and Energy and the European Institute for International Economic Relations are located in the city.[4]

Wuppertal in its present borders was formed during 1929 by merging the industrial cities of Barmen and Elberfeld with the communitiesVohwinkel, Ronsdorf, Cronenberg, Langerfeld, and Beyenburg. The initial name Barmen-Elberfeld was changed in a 1930 referendum to Wuppertal (“Wupper Valley”). The new city was administered as part of the Prussian Rhine Province.

Uniquely for Germany, it is a "linear city", owing to the steep hillsides along the River Wupper. Its highest hill is the Lichtscheid, which is 351 metres above sea level. The dominant urban centres Elberfeld (historic commercial centre) and Barmen (more industrial) have formed a continuous urbanized area since 1850. During the succeeding decades, “Wupper-Town” became the dominant industrial agglomeration of northwestern Germany. During the 20th century, this conurbation had been surpassed by Cologne, Düsseldorf and the Ruhr area, all with a more favourable topography.

From July 5, 1933 to January 19, 1934, the Kemna concentration camp was established in Wuppertal. It was one of the early Nazi concentration camps, created by the Third Reich to incarcerate their political opponents after the Nazi Party first gained power during 1933. The camp was established in a former factory on the Wupper river in the Kemna neighborhood of the Barmen part of Wuppertal. Wuppertal is famous as an important place of resistance in Germany. The Barmen Declaration or The Theological Declaration of Barmen was a document adopted by Christians in Nazi Germany who opposed the Deutsche Christen philosophy. In the opinion of the delegates to the Synod that met in Wuppertal-Barmen in May, 1934, the German Christians had corrupted church government by making it subservient to the state and had introduced Nazi ideology into the German Protestant churches that contradicted the Christian gospel.

During World War II, about 40% of buildings in the city were destroyed by Allied bombing, as were many other German cities and industrial centres. However, a large number of historic sites have been preserved, such as:

The US 78th Infantry Division captured Wuppertal against scant resistance on 16 April 1945.[5] Wuppertal became a part of the British Zone of Occupation, and subsequently part of the new state of North Rhine-Westphalia in West Germany.

In total, Wuppertal possesses over 4,500 buildings classified as national monuments, most exemplifying styles such as Neoclassicism, Eclecticism, Historicism, Art Nouveau/Jugendstil and Bauhaus.

One of the city’s greatest attractions is the globally unique suspended monorail Wuppertaler Schwebebahn, which was established during 1901. The tracks are 8 m (26.25 ft) above the streets and 12 m (39.37 ft) above the Wupper River.

Wuppertal in the arts

In football, Wuppertal's most popular club is Wuppertaler SV who currently play in the Oberliga Niederrhein, the fifth tier of the German football league system. Playing their home games at the city's Stadion am Zoo, the club, which enjoyed its last season in a nationwide division during the 2009–10 season, looks back on a rich and eventful history since its establishment as the result of a 1954 merger between the two main Wuppertal clubs SSV 04 Wuppertal and TSG Vohwinkel 80. The club spent a total of seven seasons in the top flight of German football, three of which in the Bundesliga, which they were promoted to during 1972. In their first season in the nationwide first division, the club reached a remarkable fourth place and qualified for the UEFA Cup for the first and only time in its history. After a first-round defeat by Polish side Ruch Chorzów and another two widely unsuccessful Bundesliga campaigns, the club disappeared from the top flight again, though, and has yet to return.

During 2004, the club merged with local rivals SV Borussia Wuppertal to form Wuppertaler SV Borussia, though the name change remained the only visible attribute of the merger with the club's colours and crest remaining unaltered. The additional "Borussia" was scrapped again during 2013 due to fans' demand amidst a change of leadership which was brought about to lead the club through necessary insolvency proceedings which have been completed as of September 2014.

Another noteworthy Wuppertal football club is Cronenberger SC from the district of Cronenberg. Their greatest success to date is reaching the 1952 German amateur football championship final which they lost 5–2 against VfR Schwenningen. Today, they play one tier below WSV in the Landesliga Niederrhein.

Famous players include Günter Pröpper who scored 39 of WSV's 136 Bundesliga goals and West Germany international Horst Szymaniak, as well as Cronenberg's Herbert Jäger who represented Germany at the 1952 Summer Olympics in Helsinki during his stay with the club.

In handball, Wuppertal's most successful team is Bergischer HC, playing in the top-tier Handball-Bundesliga which they were promoted to for the second time during 2013, reaching 15th place during the 2013–14 campaign and therefore staying among the top scorers for a second consecutive season. BHC originates from a 2006 cooperation between the management, squad and main sponsor of LTV Wuppertal and rivals SG Solingen from the nearby city of the same name. The club advertises itself as a representative of the entire Bergisches Land region. The team plays its home games at both Wuppertal's Uni-Halle (3,200 seats) and Solingen's Klingenhalle (2,600 seats).

Wuppertal's past most successful club are the aforementioned LTV Wuppertal. LTV spent most of their seasons in the second and third tiers, before they merged with Wuppertaler SV's handball section during 1996 to form HSG LTV/WSV Wuppertal. The handball combination was promoted to the Bundesliga after its inaugural season, finishing 8th before dissolving again during 1998. However, the mere departure of Wuppertaler SV still allowed LTV Wuppertal, whose professional team were renamed HC Wuppertal, to play another three seasons in the Bundesliga before returning to the 2nd division and re-introducing its old name. After the establishment of BHC during 2006, LTV lost its financial base and was relegated several times, currently playing in the fifth-tier Verbandsliga.

In volleyball, SV Bayer Wuppertal was one of Germany's leading men's teams for many years during the 1990s and 2000s. The team was part of the well-known mass-sports club originating in Leverkusen and was promoted to the Bundesliga during 1978. Reacting to low attendances, the eponymous Bayer AG decided to relocate the volleyball team to Wuppertal during 1992, where there also was a Bayer-funded club. After the move, the club won various titles, including the German championship during 1994 and 1997 and the German Cup during 1995. In addition to that, they finished runners-up to Greek side Olympiacos S.C. in the 1995-96 European Cup Winners' Cup, losing the final in five sets.

After the wide-reaching retreat of Bayer AG from less popular professional sport during 2008, the club acquired the name Wuppertal Titans and later A!B!C Titans Berg. Land. However, the loss of their main sponsor eventually resulted in the team having to terminate during 2012. Presently, they once more play by the name of Bayer Wuppertal in the third-tier Regionalliga, unable to promote with their current financial set-up.

Perhaps one of the most successful Wuppertal sports clubs was the women's basketball team of Barmer TV (known as BTV Wuppertal between 1994 and 2000, BTV Gold-Zack Wuppertal between 2000 and 2002 and Wuppertal Wings internationally). An 11-time German champion and 12-time German Cup winner, they won a remarkable ten consecutive doubles between 1993 and 2002. During 1996, they even won the European Cup as the first and so far only German side, beating Italy's SFT Como in the final. A year later, they narrowly missed out on back-to-back trebles, losing to French side CJM Bourges in the newly christened EuroLeague's final.

During 2002, the club withdrew from the Bundesliga due to financial troubles, their then-main sponsor Gold-Zack Werke filing for insolvency a year later. After a decade-long stay in amateur divisions, Barmer TV returned to the second-tier 2nd Bundesliga North during 2014.

Wuppertal co-hosted the 1998 FIBA World Championship for Women as one of seven host cities.

Four institutions of higher education are in Wuppertal.

The privately financed Junior Uni is an in Germany uniquely initiative to educate youth from the age of 4 to 18 years in science outside the school program.[6]

Wuppertal is well connected to the rail network. The town lies on the Cologne–Hagen and the Düsseldorf–Hagen railway lines, and is a stop for long-distance traffic. The central station is located in the district of Elberfeld. Regionalbahn trains and some Regional-Express trains also stop at Oberbarmen, Barmen, Ronsdorf and Vohwinkel. There are also S-Bahn stations in Langerfeld, Unterbarmen, Steinbeck, Zoologischer Garten and Sonnborn.

The rail services that operate on the mainline through the valley are the RE 4 (Wupper-Express), RE 7 (Rhein-Münsterland-Express), RE 13 (Maas-Wupper-Express), RB 48 (Rhein-Wupper Bahn) and four Rhine-Ruhr S-Bahn services: the S 7, S 8, S 9 and S 68 (peak hours only). Every 30 minutes, it is served by a long-distance (Intercity-Express, InterCity, EuroCity or City Night Line) service in each direction.

With the exception of the line from Wuppertal to Solingen (operated as the S 7) and the Prince William Railway to Essen (now S-Bahn line S 9), all of the branch lines connecting to main line in the city of Wuppertal are now closed. This includes, among others, the Düsseldorf-Derendorf–Dortmund Süd railway (the Wuppertaler Nordbahn), the Burgholz Railway, the Wuppertal-Wichlinghausen–Hattingen railway, the Wupper Valley Railway and the Corkscrew Railway. Thus, there were once 31 stations in the Wuppertal area, including nine stations on the mainline. Nowadays only ten are serviced any more.

There is also the Wuppertal Suspension Railway

Wuppertal is twinned with: