From Infogalactic: the planetary knowledge core
Jump to: navigation, search
This article is about Socrates' wife. For other uses, see Xanthippe (disambiguation). 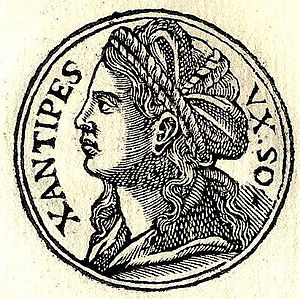 Xanthippe (/zænˈθɪpi/; Greek: Ξανθίππη, Greek pronunciation: [kʰsantʰíp̚pɛ͜ɛ]; 5th century – 4th century BC) was an ancient Athenian, the wife of Socrates and mother of their three sons: Lamprocles, Sophroniscus, and Menexenus. She was likely much younger than Socrates, perhaps by as much as 40 years.[1]

Xanthippe means "yellow horse", from the Greek ξανθός xanthos (blonde) and ἵππος hippos (horse). Hers is one of many Greek personal names with a horse theme (cf. Philippos "friend of horses", Hippocrates "horse tamer" etc.). The hippos in an ancient Greek name often suggested aristocratic heritage.[2] One additional reason for thinking Xanthippe's family was socially prominent was that her eldest son was named Lamprocles instead of "Sophroniscus" (after Socrates' father): the ancient Greek custom was to name one's first child after the more illustrious of the two grandfathers. Xanthippe's father is believed to have been named Lamprocles. Since he was even more well-established in Athenian aristocracy than was Socrates' father, his name would have been the preferred choice for the name of the first-born son.[3] 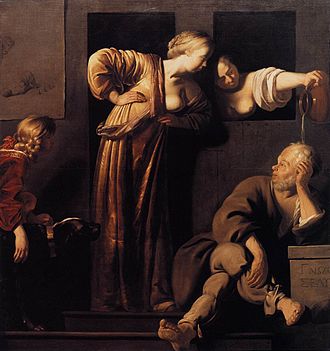 The chamberpot episode: Socrates, his Wives and Alcibiades, by Reyer van Blommendael

Plato's portrayal of Xanthippe in the Phaedo suggests that she was nothing more than a devoted wife and mother;[4] She is mentioned nowhere else in Plato.[5] Xenophon, in his Memorabilia, portrays her in much the same light, although he does make Lamprocles complain of her harshness;[6] it could be argued that this is fairly typical of an adolescent's views of a strict parent. It is only in Xenophon's Symposium where we have Socrates agree that she is (in Antisthenes' words) "the hardest to get along with of all the women there are."[7] Nevertheless, Socrates adds that he chose her precisely because of her argumentative spirit:

It is the example of the rider who wishes to become an expert horseman: "None of your soft-mouthed, docile animals for me," he says; "the horse for me to own must show some spirit" in the belief, no doubt, if he can manage such an animal, it will be easy enough to deal with every other horse besides. And that is just my case. I wish to deal with human beings, to associate with man in general; hence my choice of wife. I know full well, if I can tolerate her spirit, I can with ease attach myself to every human being else.[8]

Perhaps this picture of Xanthippe originated with the historical Antisthenes, one of Socrates' pupils, since Xenophon initially puts this view into his mouth. Aelian also depicts her as a jealous shrew in his description of an episode in which she tramples underfoot a large and beautiful cake sent to Socrates by Alcibiades.[9] Diogenes Laërtius tells of other stories involving Xanthippe's supposed abusiveness, but he does not cite any source for them.[10] 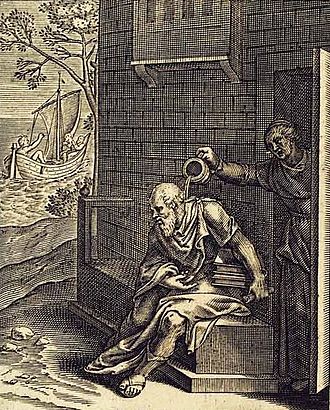 It seems that Xenophon's portrayal of her in his Symposium has been the most influential: Diogenes Laërtius, for example, seems to quote the Symposium passage, though he does not mention Xenophon by name,[10] and the term "Xanthippe" has now come to mean any nagging scolding person, especially a shrewish wife.

Later writers, such as Diogenes Laërtius who cite Aristotle as the earliest source, say that Socrates had a second wife called Myrto.[10] Plutarch tells of a similar story, reporting that it comes from a work entitled On Good Birth, but he expresses doubt as to whether it was written by Aristotle.[11] In Plutarch's version of the story, Socrates, who was already married, attended to Myrto's financial concerns when she became a widow; this does not entail marriage. We have no more reliable evidence on this issue.[12]

An unconfirmed anecdote purports that once Xanthippe was so enraged with her husband, that she took a chamber pot and poured it out over Socrates' head, which – goes the tale on – the philosopher accepted with the allegory: “After thunder comes the rain.”

In Shakespeare's Taming of the Shrew, Petruchio compares Katherina "As Socrates' Xanthippe or a worse" in Act 1 Scene 2. (Read here)

Addison discusses matrimony in The Spectator no.482, dated Friday 12 September 1712:

In his poem 'An Acrostic', Edgar Allan Poe makes references to her although he allegedly purposely misspells her name and instead writes 'Zantippe'.

In "Doctor Thorne" by Anthony Trollope the author says of wives 'There may possibly have been a Xantippe here and there, but Imogenes are to be found under every bush.'

Solomon Maimon refers to a woman's "Xanthippe-like character" in Chapter 10 of his autobiography. ("A widow, celebrated for her superior talents, as well as for her Xanthippe-like character, kept a public house at the extremity of one of the suburbs. She had a daughter who yielded to her in none of the above-mentioned qualities, and who was indispensable to her in the management of the house. [...]"

Xanthippe has a fairly important role in Maxwell Anderson's 1951 play Barefoot in Athens. In the 1966 Hallmark Hall of Fame television production, she was played by Geraldine Page opposite Peter Ustinov as Socrates.

In the 1953 young-adult detective novel Detectives in Togas (1953) by Henry Winterfeld, the schoolboys often joke about their schoolmaster Xanthos, saying his name reminds them of Xanthippe.

A fictional account of Xanthippe's relationship with her husband is presented in the play Xanthippe by the British author and playwright Deborah Freeman. Xanthippe was first produced at the Brockley Jack Theatre, London, in 1999.

A rebellious child is named "Xanthippe" in the Netflix comedy Unbreakable Kimmy Schmidt.

Emanuel Carnevali, Italian-American poet, in his Autobiography refers to women he meets while being treated for encephalitis in an Italian sanatorium as "Xanthippes all."

Asteroid 156 Xanthippe is named in her honour.

In 1995, P. Naskrecki and R. K. Colwell[14] gave the name Xanthippe to a new genus of flower mite that inhabits flowers of palms of the genus Socratea and is probably phoretic on the beetles that pollinate the palm.

A species of African white-toothed shrew was described by Wilfred Hudson Osgood in 1910 as Crocidura xantippe, common name "Xanthippe's Shrew."