Yajnavalkya (Sanskrit: याज्ञवल्क्य, Yājñavalkya) of Videha (fl. c. 7th century BCE[1]) was a sage and philosopher of Vedic India. He was one of the first philosophers in recorded history, alongside Uddalaka Aruni.[2] In the court of King Janaka of Mithila, he was renowned for his expertise in Vedic ritual and his unrivaled talent in theological debate. He expounded a doctrine of neti neti to describe the universal Self or Ātman. He later became a wandering ascetic. His teachings are recorded in the Shatapatha Brahmana and the Brihadaranyaka Upanishad.[3]

He is traditionally credited with the authorship of the Shatapatha Brahmana (including the Brihadaranyaka Upanishad]l), besides the Yoga Yajnavalkya and the Yājñavalkya Smṛti.[4] He is also a major figure in the Upanishads. 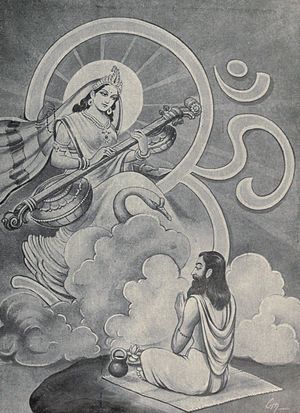 According to traditional accounts, Yājñavalkya was the son of Devarāta and was the pupil of sage Vaisampayana.[5] Once, Vaisampayana got angry with Yājñavalkya as the latter argued too much to separate some latter additions to Yajurveda in being abler than other students. The angry teacher asked his pupil Yājñavalkya to give back all the knowledge of Yajurveda that he had taught him.[5]

As per the demands of his Guru, Yājñavalkya vomited all the knowledge that he acquired from his teacher in form of digested food. Other disciples of Vaisampayana took the form of partridge birds and consumed the digested knowledge (a metaphor for knowledge in its simplified form without the complexities of the whole but the simplicity of parts) because it was knowledge and they were very eager to receive the same.

The Saṃskṛt name for partridge is "Tittiri". As the Tittiri (partridge) birds ate this Veda, it is thenceforth called the Taittirīya Yajurveda. It is also known as Kṛṣṇa Yajurveda or Black-Yajurveda on account of it being a vomited substance. The Taittirīya Saṃhitā thus belongs to this Yajurveda.[6]

Then Yājñavalkya determined not to have any human guru thereafter. Thus he began to propitiate the Sun God, Surya. Yājñavalkya worshipped and extolled the Sun, the master of the Vedas, for the purpose of acquiring the fresh Vedic portions not known to his preceptor, Vaiśampāyana.[7]

The Sun God, pleased with Yājñavalkya's penance, assumed the form of a horse and graced the sage with such fresh portions of the Yajurveda as were not known to any other. This portion of the Yajurveda goes by the name of Śukla Yajurveda or White-Yajurveda on account of it being revealed by Sun. It is also known as Vajasaneya Yajurveda, because it was evolved in great rapidity by Sun who was in the form of a horse through his manes.The rhythm of recital of these vedas is therefore to the rhythm of the horse canter and distinguishes itself from the other forms of veda recitals. In Sanskrit, term "Vaji" means horse. Yājñavalkya divided this Vajasaneya Yajurveda again into fifteen branches, each branch comprising hundreds of Yajus Mantras. Sages like Kanva, Madhyandina and others learnt those and Śukla Yajurveda branched into popular recensions named after them.[5]

It is important to note that within the hierarchy of Brāhmaṇas, certain sects believe in the Kṛṣṇa Yajurveda while others practice from the Śukla Yajurveda.

Yājñavalkya married two wives. One was Maitreyi and the other Katyaayanee.[8] Of the two, Maitreyi was a Brahmavadini (one who is interested in the knowledge of Brahman).The descendant sects of Brahmans are the progeny of the first wife Katyaayanee. When Yājñavalkya wished to divide his property between the two wives, Maitreyi asked whether she could become immortal through wealth. Yājñavalkya replied that there was no hope of immortality through wealth and that she would only become one among the many who were well-to-do on.[9] When she heard this, Maitreyi asked Yājñavalkya to teach her what he considered as the best. Then Yājñavalkya described to her the greatness of the Absolute Self, the nature of its existence, the way of attaining infinite knowledge and immortality, etc. This immortal conversation between Yājñavalkya and Maitreyi is recorded in the Brihadaranyaka Upanishad.[10]

Wisdom of Yājñavalkya is shown in Brhadaranyaka Upanishad where he gives his teachings to his wife Maitreyi and King Janaka.[9] He also participates in a competition arranged by King Janaka about the selecting great Brhama Jnani (knower of Brahman). His intellectual dialogues with Gargi (a learned scholar of the times) form a beautiful chapter filled with lot of philosophical and mystical question-answers in Brhadaranyaka Upanishad.[9] He was then praised as the greatest Brahmajnyani by all the sages at the function organised by king Janaka.[11][page needed] In the end, Yājñavalkya took Vidvat Sanyasa (renunciation after the attainment of the knowledge of Brahman) and retired to the forest.