From Infogalactic: the planetary knowledge core
Jump to: navigation, search
This article is about a scripture of Hinduism. For field of traditional Indian medicine, see Ayurveda.

The Yajurveda (Sanskrit: यजुर्वेद, yajurveda, from yajus meaning "prose mantra" and veda meaning "knowledge") is the Veda of prose mantras.[1] An ancient Vedic Sanskrit text, it is a compilation of ritual offering formulas that were said by a priest while an individual performed ritual actions such as those before the yajna fire.[1] Yajurveda is one of the four Vedas, and one of the scriptures of Hinduism. The exact century of Yajurveda's composition is unknown, and estimated by scholars to be around 1200 to 1000 BC, contemporaneous with Samaveda and Atharvaveda.[2] 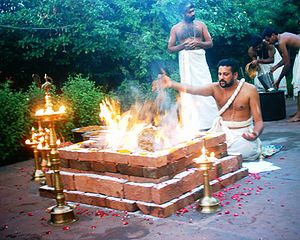 Michael Witzel interprets Yajurveda to mean a "knowledge text of prose mantras" used in Vedic rituals.[1] Ralph Griffith interprets the name to mean "knowledge of sacrifice or sacrificial texts and formulas".[12] Carl Olson states that Yajurveda is a text of "mantras (sacred formulas) that are repeated and used in rituals".[13]

There are four surviving recensions of the Krishna Yajurveda – Taittirīya saṃhitā, Maitrayani saṃhitā, Kaṭha saṃhitā and Kapiṣṭhala saṃhitā.[18] A total of eighty six recensions are mentioned to exist in Vayu Purana, however vast majority of them are believed to be lost.[19] The Katha school is referred to as a sub-school of Carakas (wanderers) in some ancient texts of India, because they did their scholarship as they wandered from place to place.[20]

The best known and best preserved of these recensions is the Taittirīya saṃhitā. Some attribute it to Tittiri, a pupil of Yaksa and mentioned by Panini.[26] The text is associated with the Taittiriya school of the Yajurveda, and attributed to the pupils of sage Tittiri (literally, partridge birds).[27]

The Maitrayani saṃhitā is the oldest Yajurveda Samhita that has survived, and it differs largely in content from the Taittiriyas, as well as in some different arrangement of chapters, but is much more detailed.[28]

The Kāṭhaka saṃhitā or the Caraka-Kaṭha saṃhitā, according to tradition was compiled by Katha, a disciple of Vaisampayana.[28] Like the Maitrayani Samhita, it offers much more detailed discussion of some rituals than the younger Taittiriya samhita that frequently summarizes such accounts.[28] The Kapiṣṭhala saṃhitā or the Kapiṣṭhala-Kaṭha saṃhitā, named after the sage Kapisthala is extant only in some large fragments and edited without accent marks.[28] This text is practically a variant of the Kāṭhaka saṃhitā.[24]

In Krishna Yajurveda, each of the recensions has or had their Brahmana text mixed into the Samhita text, thus creating a motley of the prose and verses, and making it unclear, disorganized.[3][28]

The Vajasaneyi Samhita has forty chapters or adhyayas, containing the formulas used with the following rituals:[15]

Structure of the mantras

The various ritual mantras in the Yajurveda Samhitas are typically set in a meter, and call on Vedic deities such as the Savita (Sun), Indra, Agni, Prajapati, Rudra and others. The Taittiriya Samhita in Book 4, for example, includes the following verses for the Agnicayana ritual recitation (abridged),[45]

First harnessing the mind, Savita; creating thoughts and perceiving light, brought Agni from the earth.
Harnessing the gods with mind; they who go with thought to the sky, to heaven, Savita instigates those who will make great light.
With the mind harnessed, we are instigated by god Savita, for strength to go to heaven.

Whose journey the other gods follow, praising the power of the god, who measured the radiant regions of the earth, he is the great god Savita.
God Savita, impel the ritual, impel for good fortune the lord of ritual !
Divine Gandharva, purifier of thought, purify our thoughts ! May the lord of speech make our words sweet !

The title Satapatha Brahmana means "Brahmana of the Hundred Paths".[46] It is one of the largest Brahmana text that has survived.[46] It includes, states Staal, a "veritable encyclopedia of meandering opinions on ritual and other matters".[46]

The Satapatha Brahmana was translated by Eggeling in late 19th-century, reprinted often and has been well read because of the translation. However, it has been misinterpreted and misused, states Staal, because "it contains enough material to support any theory".[46] Eggeling, the first translator of Satapatha Brahmana called it "flimsy symbolism rather than serious reasoning", similar to "speculative vaporings" found in the Christian and non-Christian variety of Gnosticism.[46][47]

The Yajurveda has six primary Upanishads embedded within it.[9]

The Brihadaranyaka Upanishad is found in the White Yajurveda.[3] It is one of the Mukhya Upanishads, and among the largest and oldest as well (~700 BC).[8] It is key scripture of Hinduism that has influenced all schools of Hindu philosophy. The text is a treatise on Ātman (Soul, Self), with passages on metaphysics, ethics and a yearning for knowledge that influenced various Indian religions, ancient and medieval scholars.[48][49][50]

The Brihadaranyaka Upanishad is among the earliest extensive discussions of the Hindu concept of dharma, karma and moksha (liberation from sorrow, freedom, emancipation, self-realization). Paul Deussen calls it, "unique in its richness and warmth of presentation", with profoundness that retains its full worth in modern times.[51] Max Muller illustrated its style as follows,

The Isha Upanishad is found in the White Yajurveda.[3] It is one of the shortest Upanishads, embedded as the final chapter of the Shukla Yajurveda. A key scripture of the Vedanta sub-schools of Hinduism, its name is derived from "hidden in the Lord (Self)".[53]

The Isha Upanishad discusses the Atman (Soul, Self) theory of Hinduism, and is referenced by both Dvaita (dualism) and Advaita (non-dualism) sub-schools of Vedanta.[54][55] It is classified as a "poetic Upanishad" along with Kena, Katha, Svetasvatara and Mundaka Upanishads.[56]

The Taittiriya Upanishad is found in the black Yajurveda.[3] It is the seventh, eighth and ninth chapters of Taittiriya Aranyaka, which are also called, respectively, the Siksha Valli, the Ananda Valli and the Bhrigu Valli.[3][57]

The Taittiriya Upanishad includes verses that are partly prayers and benedictions, partly instruction on phonetics and praxis, partly advice on ethics and morals given to graduating students from ancient Vedic gurukul (schools), partly a treatise on allegory, and partly philosophical instruction.[3]

The text offers a view of education system in ancient India. It also includes sections on ethics and invocation for one's personal development. Max Muller translates the text's tenth anuvaka, for example, as an affirmation of one's Self as an capable, empowered blissful being.[58] The tenth anuvaka asserts, "I am he who shakes the tree. I am glorious like the top of a mountain. I, whose pure light (of knowledge) has risen, am that which is truly immortal, as it resides in the sun. I (Soul, Self) am the treasure, wise, immortal, imperishable. This is the teaching of the Veda, by sage Trisanku."[58]

The Katha Upanishad is found in the black Yajurveda.[3] The Upanishad is the legendary story of a little boy, Nachiketa – the son of sage Vajasravasa, who meets Yama – the Indian deity of death. Their conversation evolves to a discussion of the nature of man, knowledge, Ātman (Soul, Self) and moksha (liberation).[59]

The Kathaka Upanishad is an important ancient Sanskrit corpus of the Vedanta sub-schools. It asserts that "Atman (Soul, Self) exists", teaches the precept "seek Self-knowledge which is Highest Bliss", and expounds on this premise like the other primary Upanishads of Hinduism. The detailed teachings of Katha Upanishad have been variously interpreted, as Dvaita (dualistic)[60] and as Advaita (non-dualistic).[61][62][63]

The Katha Upanishad found in the Yajurveda is among the most widely studied Upanishads. Philosophers such as Arthur Schopenhauer praised it, Edwin Arnold rendered it in verse as "The Secret of Death", and Ralph Waldo Emerson credited Katha Upanishad for the central story at the end of his essay Immortality, as well as his poem "Brahma".[61][64]

The Shvetashvatara Upanishad is found in the black Yajurveda.[3] The text opens with metaphysical questions about the primal cause of all existence, its origin, its end, and what role if any did time, nature, necessity, chance, the spirit had as primal cause?[65] It then develops its answer, concluding that "the Universal Soul exists in every individual, it expresses itself in every creature, everything in the world is a projection of it, and that there is Oneness, a unity of souls in one and only Self".[66]

The Shvetashvatara Upanishad is notable for its discussion of the concept of personal god – Ishvara, and suggesting it to be a path to one's own Highest Self.[66][67] The text is also notable for its multiple mentions of both Rudra and Shiva, along with other Vedic deities, and of crystallization of Shiva as a central theme.[67]

The Maitrayaniya Upanishad, also known as the Maitri Upanishad, is found in the black Yajurveda. It consists of seven Prapathakas (lessons). The first Prapathaka is introductory, the next three are structured in a question-answer style and discuss metaphysical questions relating to Atman (Self, Soul), while the fifth to seventh Prapathaka are supplements.[68] However, several manuscripts discovered in different parts of India contain lesser number of Prapathakas, with a Telugu language version showing just four.[69]

The common kernel of the Maitri Upanishad across different recensions, states Max Muller, is a reverence for soul, that can be summarized in a few words as, "(Man) is the Self – the immortal, the fearless, the Brahman".[69] The Maitrayaniya Upanishad is notable for its references to theories also found in Buddhism, elements of the Samkhya and Yoga schools of Hinduism, as well as the Ashrama system.[70] 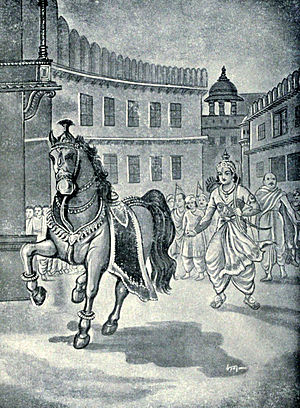 Ashvamedhika parva of the Hindu epic Mahabharata describes the year long ceremony according to Yajurveda.

The core text of the Yajurveda falls within the classical Mantra period of Vedic Sanskrit at the end of the 2nd millennium BC - younger than the Rigveda, and roughly contemporary with the Atharvaveda, the Rigvedic Khilani, and the Sāmaveda.[72] The scholarly consensus dates the bulk of the Yajurveda and Atharvaveda hymns to the early Indian Iron Age, c. 1200 or 1000 BC,[73] corresponding to the early Kuru Kingdom.[74]

The Vedas are notoriously hard to date accurately as they are compilations and were traditionally preserved through oral tradition leaving virtually no archaeological evidence. Scholars such as Georg Feuerstein and others suggest that the dates given to most of these texts is far too late.[75]

The text is a useful source of information about the agriculture, economic and social life during the Vedic era. The verses, for example, list the types of crops considered important in ancient India,

May my rice plants and my barley, and my beans and my sesame,
and my kidney-beans and my vetches, and my pearl millet and my proso millet,
and my sorghum and my wild rice, and my wheat and my lentils,
prosper by sacrifice.

Most surviving manuscripts and recensions of Yajurveda's Samhitas, Aranyakas and Brahmanas remain untranslated into Western languages. The two reliable translations are from British India colonial era, and have been widely studied.[77] These are AB Keith's translation of Taittiriya Samhita of the Black Yajurveda,[78] and Julius Eggeling's translation of Satapatha Brahmana of the White Yajurveda.[47]

Ralph Griffith published an early translation of White Yajurveda Samhita.[79] However, Frits Staal has questioned his translations and considers them "fantasies and best discarded".[80]

Devi Chand published a re-interpreted translation of Yajurveda in 1965, reprinted as 3rd edition in 1980, wherein the translation incorporated Dayananda Saraswati's monotheistic interpretations of the Vedic text, and the translation liberally adds "O Lord" and "the Creator" to various verses, unlike other translators.[81]

In 18th century, French Jesuits published Ezourvedam, claiming it to be a translation of a recension of the Yajurveda.[82][83] The Ezourveda was studied by Voltaire,[84] and later declared a forgery, representing Jesuit ideas to Indians as a Vedic school.[83]