He was born to a Jewish family in Minsk (now Belarus).[2] Four months later his family moved to Saint Petersburg. They remained in that city (known as Leningrad from 1924–1991) until August 1941, when together with the institute where Zel'dovich worked, they were evacuated to Kazan to avoid the Axis Invasion of the Soviet Union. They remained in Kazan until the summer of 1943, when Zel'dovich moved to Moscow. Despite being raised in a Jewish family, he later on became an atheist.[3][4] In May 1931, at age seventeen, Zel'dovich became a laboratory assistant at the Institute of Chemical Physics of the USSR Academy of Sciences. He was associated with the Institute until the end of his life. In 1936 he defended his dissertation, which was on the adsorption and catalysis on heterogeneous surfaces, for his Candidate of Science (equal to PhD). The most important point of it was the research on the Freundlich (or classical) adsorption isotherm. Zel'dovich discovered the theoretical foundation of this empirical observation. In 1939 he received the degree of Doctor of Science (Physics and Mathematics), the doctor dissertation being on the oxidation of nitrogen. Zel'dovich discovered its mechanism, known in physical chemistry as Thermal NO Mechanism or Zel'dovich Mechanism.

Between 1937 and 1948 he worked on the theory of ignition, combustion and detonation. From 1939–1940 together with Julii Khariton Zel'dovich achieved important results in the Theory of Nuclear Chain Reactions. In 1943 he began his participation in the Soviet Atomic Project, working along with Igor Kurchatov. His work on nuclear weapons continued until October 1963.

In 1952 he began work in the field of elementary particles and their transformations. He predicted the beta decay of a pi meson. Together with S. Gershtein he noticed the analogy between the weak and electromagnetic interactions, and in 1960 predicted the muon catalysis (more precisely, the muon-catalysed dt-fusion) phenomenon. In 1977 Zel'dovich together with Fyodor Shapiro was awarded the Kurchatov Medal, the highest award in nuclear physics of the USSR. The citation was "for prediction of characteristics of ultracold neutrons, their detection and investigation". He was elected academician of the USSR Academy of Sciences on 20 June 1958. He was a head of division at the Institute of the Applied Mathematics of the USSR Academy of Sciences from 1965 until January 1983.

Research in astrophysics and cosmology 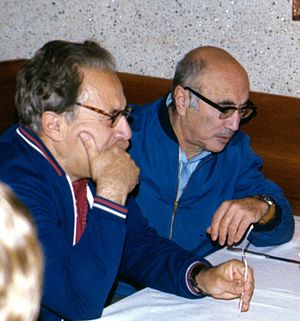 In early 1960s he started working in astrophysics and physical cosmology. In 1964, he and independently Edwin Salpeter were the first to suggest that accretion discs around massive black holes are responsible for the huge amounts of energy radiated by quasars.[5][6] Since 1965 he was also a professor at the Department of Physics of the Moscow State University, and a head of the division of Relativistic Astrophysics at the Sternberg Astronomical Institute.

Zel'dovich worked on the theory of the evolution of the hot universe, the properties of the microwave background radiation, the large-scale structure of the universe, and the theory of black holes. He predicted, with Rashid Sunyaev, that the cosmic microwave background should undergo inverse Compton scattering. This is called the Sunyaev-Zel'dovich effect, and measurements by telescopes such as the Atacama Cosmology Telescope and the South Pole Telescope has established it as one of the key observational probes of cluster cosmology. Zel'dovich contributed sharp insights into the nature of the large scale structure of the universe, in particular, through the use of Lagrangian perturbation theory (the Zel'dovich approximation) and the application of the Burgers' equation approach via the adhesion approximation.

Zel'dovich played a key role in developing the theory of black hole evaporation due to Hawking radiation, where in his visit to Moscow in 1973, Soviet scientists Zel'dovich and Alexei Starobinsky showed Stephen Hawking that, according to the quantum mechanical uncertainty principle, rotating black holes should create and emit particles.[7]

Igor Kurchatov called him a "genius" and Andrei Sakharov named him "a man of universal scientific interests." Stephen W. Hawking once said to Zel'dovich: "before I met you, I believed you to be a 'collective author', like Bourbaki."