From Infogalactic: the planetary knowledge core
Jump to: navigation, search
For other uses of "Yakutsk", see Yakutsk (disambiguation).

Yakutsk is a major port on the Lena River. It is served by the Yakutsk Airport as well as the smaller Magan Airport. It is a major supplier of diamonds. Its population is almost 300,000 and its average winter temperature is −34 °C (−30 °F). If the 3 million km2 Sakha Republic were a sovereign nation, rather than a federal subject of Russia, its capital, Yakutsk, would be the coldest national capital as well as the coldest major city in the world.[12] 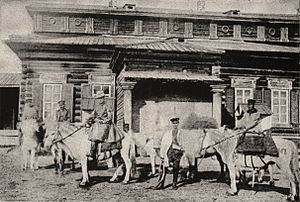 The Turkic Sakha people, also known as the Yakuts, migrated to the area in the 13th and 14th centuries from other parts of Siberia due to the rising military power of the Mongols. When they arrived they mixed with other indigenous Siberians in the area.[13] Russian Yakutsk was founded in 1632[7] as an ostrog (fort) by Pyotr Beketov. In 1639, it became the center of a voyevodstvo. The Yakutsk Voyevoda quickly became the most important Russian official in the region and directed expansion to the east and south.

Yakutsk did not grow into a city until the discovery of large reserves of gold and other minerals in the 1880s and 1890s. These reserves were developed extensively during industrialization under Stalin. The rapid growth of forced labor camps in Siberia was also a major factor encouraging Yakutsk's development.

With an extreme subarctic climate (Köppen climate classification: Dfd), Yakutsk has the coldest winter temperatures for any city.[7] Average monthly temperatures range from +19.5 °C (67.1 °F) in July to −38.6 °C (−37.5 °F) in January, and only Norilsk has a lower mean annual temperature for any settlement of over 100,000.[citation needed]

The coldest temperatures ever recorded on the planet outside Antarctica occurred in the basin of the Yana River to the northeast of Yakutsk. Although winters are long and extremely cold, summers are warm (though rather short), with daily maximum temperatures occasionally exceeding +30 °C (86 °F),[7] making the seasonal temperature differences for the region among the greatest in the world. The lowest temperature recorded in Yakutsk was −64.4 °C (−83.9 °F) and the highest was +38.4 °C (101.1 °F). Yakutsk is the biggest city built on continuous permafrost, and most houses there are built on concrete piles.

Yakutsk has a distinct inland location, being almost 1,000 kilometres (620 mi) from the Pacific Ocean, which coupled with the high latitude means exposure to severe winters and also lack of temperature moderation. July temperatures soar to an above-normal average for this parallel, with the average being several degrees hotter than such more southerly Far East cities as Vladivostok or Yuzhno-Sakhalinsk.[citation needed] The July daytime temperatures are even hotter than some marine subtropical areas. The very warm summers ensures that Yakutsk, in spite of its freezing winters, is far below the tree line.

The climate is quite dry, with maximum precipitation occurring in the summer months, due to the intense Siberian High forming around the very cold continental air during the winter. Even during the summer, precipitation is not heavy since the moist southeasterly winds from the Pacific Ocean lose their moisture over the coastal mountains well before reaching the Lena valley.

With the Lena River navigable in the summer, there are various boat cruises offered, including upriver to the Lena Pillars, and downriver tours which visit spectacular scenery in the lower reaches and the Lena delta.

Yakutsk is responsible for a fifth of the world's production of diamonds,[7] and is home to ALROSA and other mining companies. The city is also home to a significant food industry, to tanneries, to sawmills, and to factories for building materials.[7]

Yakutia Airlines has its head office in the city.[16]

There are a number of museums as well: the National Fine Arts Museum of Sakha; the Museum of Local Lore and History, named after E. Yaroslavsky; and the only museums in the world dedicated to the khomus and permafrost.

The annual Ysyakh summer festival takes place the last weekend in June. The traditional Yakut summer solstice festivities include a celebration of the revival and renewal of the nature, fertility and beginning of a new year. It is accompanied by national Yakut rituals and ceremonies, folk dancing, horse racing, Yakut ethnic music and singing, national cuisine, and competitions in traditional Yakut sports.[17]

Yakutsk is the capital of the Sakha Republic.[2] As an inhabited locality, Yakutsk is classified as a city under republic jurisdiction.[1] Within the framework of administrative divisions, it is, together with the settlement of Zhatay and eleven rural localities, incorporated as the city of republic significance of Yakutsk—an administrative unit with a status equal to that of the districts.[1] As a municipal division, Yakutsk and the eleven rural localities are incorporated as Yakutsk Urban Okrug.[3] The settlement of Zhatay is not a part of Yakutsk Urban Okrug and is independently incorporated as Zhatay Urban Okrug.[3]

Yakutsk is a destination of the Lena Highway. The city's connection to the highway is only accessible by ferry in the summer, or in the dead of winter, directly over the frozen Lena River, as Yakutsk lies entirely on its western bank, and there is no bridge anywhere in the Sakha Republic that crosses the Lena. The river is impassable for long periods of the year when it contains loose ice, when the ice cover is not thick enough to support traffic, or when the water level is too high and the river turbulent with spring flooding. The highway ends on the eastern bank of Lena in Nizhny Bestyakh (Нижний Бестях), an urban-type settlement of some four thousand people. Yakutsk is connected with Magadan by the Kolyma Highway.

A road bridge over the Lena is scheduled to be built by 2020.[18][19] The bridge had originally been planned to be a dual-use railroad and road bridge so the Amur Yakutsk Mainline, the North-South railroad being extended from the South, could connect the city with the East-West Baikal Amur Mainline. The railway reached the settlement of Nizhny Bestyakh, on the opposite bank of the Lena from Yakutsk, in November 2011.[20]

The bridge will be over 3 kilometers (1.9 mi) long and constructed 40 kilometers (25 mi) upriver at Tabaga, where the river narrows and does not create a wide flooded area in spring. In the dead of winter, the frozen Lena makes for a passable highway for ice truckers using its channel to deliver provisions to far-flung outposts. Yakutsk is also connected to other parts of Russia by Yakutsk Airport.

M.K.Ammosov North-Eastern Federal University is situated in the city. There is also a branch of the Russian Academy of Sciences, which contains, among other things, the Institute of Cosmophysical Research, which runs the Yakutsk Extensive Air Shower installation (one of the largest cosmic-ray detector arrays in the world), and the Yakutsk Permafrost Institute developed with the aim of solving the serious and costly problems associated with construction of buildings on frozen soil.

At the primary and secondary levels, the city has a number of UNESCO Associated Schools, including the Sakha-Turkish College, Sakha-French School, Sakha-Korean School, and School #16.[21]

Yakutsk is twinned with: