The Yale Bulldogs men's ice hockey team represents Yale University in New Haven, Connecticut and is the oldest collegiate ice hockey team the United States. The Bulldogs compete in the Ivy League and the ECAC Hockey League (ECACHL) and play their home games at Ingalls Rink, also called the Yale Whale. The current head coach is Keith Allain, who led the Bulldogs to an Ivy League championship in his first year as head coach (2006–2007 season). Allain is assisted by former QU/UND goaltender, Josh Siembida. On April 13, 2013, the Bulldogs shut out Quinnipiac 4–0 to win their first NCAA Division I Championship.

The Yale Men's Ice Hockey team is the oldest existing intercollegiate ice hockey program in the United States, the program traces its roots back to 1893.[3] Yale played its first intercollegiate match on February 1, 1896 against Johns Hopkins, resulting in a 2–2 tie.[4][5]

In the early years of the program, the team played under the direction of captains in a player-coach role and team managers.[6] Despite not having an official head coach, the team proved successful in the early years of the program playing various amateur athletic clubs and a growing number of intercollegiate teams at various schools in the Northeast.[4] Yale won its first intercollegiate championship in the fourth season of the program in 1899 when the Bulldogs went 6–0 through the season. Yale continued its early success winning the intercollegiate championship in each of the next three seasons.[4] On February 22, 1904, the Bulldogs played their 100th game at the St. Nicholas Rink in New York, a 2–5 loss against rival Harvard.[4] The team won its 100th game on January 8, 1913 with a 6–0 shutout at Columbia.[4]

Frederick Rocque became the program's first head coach in the 1916–17 season, during which the team finished with ten wins and four losses.[4] The following two seasons from 1917–1919, the team only played three games due to the World War. Following the break, Talbot Hunter took over as head coach for the 1919–20 season. Hunter's Yale team began the season on a five game trip to Canada, the first time an American university would make such a trip. During the rest of the 1919–20 season and through the 1920–21 season Yale played home games in Philadelphia due to poor ice conditions at the Bulldogs home rink.[4] Clarence Wanamaker took over as head coach after serving as the coach of Dartmouth from 1915–20.[6] Wanamaker would become the first multi-year head coach in program history and led the team from 1921 to 1928. In his sixth season, the 1926–27 season, ice hockey was given major sport status by the university.[4] He led the program to a record high 18-win season in 1922–23 and followed that season with a 14-win season, the first back to back double digit-win seasons in program history.[6]

The Quadrangular League was created for the 1933–34 with Harvard, Yale, Princeton and Dartmouth. The league is considered the predecessor to the Ivy League and ECAC Hockey.[7] In 1936, the Council of Ivy Group Presidents agreed on the formal formation of the League, however the agreement did not go into effect until the 1955–56 season.[7] Yale won the Hobey Baker Trophy, given to Quadrangular League champions in the 1934–35 season.[4]

In 1938, the university hired former New York Rangers player, Murray Murdoch to take over the hockey program. Murdoch quickly turned the Bulldogs team around, after three consecutive losing seasons, he recorded back-to-back 10-win seasons followed by a 12-win and 14-win season. Seasons were shortened from 1942–1946 during World War II and following the war Army joined the Quadrangular League and it became known as the Pentagonal League in 1946–47.[7] Army left the league after two season, but was replaced by Brown.[7] In the 1951–52 season, the Bulldogs swept through the Pentagonal League with a 6–1–0 league record and finished the regular season 16–7–0. The team received a bid to the 1952 NCAA Ice Hockey Tournament. It was the first Frozen Four appearance by the university.[6] The four-team tournament, still in its early years, having first been played in 1948, was held at the Broadmoor Arena in Colorado Springs, Colorado.[8] Yale lost to the hometown Colorado College Tigers but won the consolation game 4–1 over St. Lawrence to place third in the tournament.[8] Murdoch guided Yale to its 500th program win in the 1953–54 season on March 3, 1954 in a 10–7 win over Providence.[4]

In 1961 Yale and the other members of the Pentagonal League joined various other schools in New England to form the 28-team ECAC Hockey.[9] After two seasons a number of the smaller programs split leaving the ECAC with the Ivy League schools and a number of other Division I programs.[10] Murray Murdoch ended his tenure as Yale head coach after 27 seasons in 1965. Murdoch finished with a record of 271–234–20, lead the Bulldogs to two Hobey Baker Trophy Quadrangular League Championships, and the program's first NCAA Frozen Four appearance.[11]

Yale won its first ECAC Regular Season Champion in the 1997–98 season. Despite losing in the ECAC Playoffs to Harvard, Yale received an at-large bid to the 1998 NCAA Ice Hockey Tournament.[12] The Bulldogs lost in the opening round of the NCAA Tournament 0–4 to Ohio State.[12] The Bulldogs finished the season setting a new program best record of 23–9–3 (.700).[6] With the success of the season coach Taylor was named the national coach of the year in 1997–98 by the American Hockey Coaches Association.[13] In 2001–02 Yale got their revenge against Ohio State when the Bulldogs beat the Buckeyes 6–2 in Columbus, Ohio to win the university's 2,000th game.[4]

Yale made the 2006 ECAC Playoffs and faced Union in the best-of-3 series first round series.[14] After winning the first game 2–1 in overtime the second game of the series on March 4, 2006 was tied 2–2 at the end of regulation. 11th-seeded Yale eventually won 3–2 when David Meckler redirected a Zach Mayer shot 1:35 into the fifth overtime for a shorthanded goal, giving the a 3–2 victory over the 6th-seeded Union.[14] The fifth overtime goal came at 1:10 a.m., six hours and 10 minutes after start of the game. The 141 minutes and 35 seconds set a new NCAA record for the longest played in NCAA men's hockey history.[14] The win would become Taylor's last victory as Yale head coach after Yale's season ended with a 2-game sweep by Dartmouth in the second round of the ECAC Playoffs.[4]

Tim Taylor was let go at the conclusion of the 2005–06 season after 28 seasons as head coach of the team. During his program leading tenure Taylor recorded 342 wins, 433 losses 55 ties; becoming the first Yale coach to eclipse the 300 win mark.[6] He coached more games than any other ECAC coach and guided Yale to 19 ECAC playoff appearances, the 1997 Cleary Cup- awarded to the ECAC Regular Season Champion, and one NCAA Tournament appearance.[13] In addition, he coached all six of the school's Hobey Baker Award finalists 30 years at Yale.[13] Taylor missed two seasons in 1984 and 1994 to coach United State Olympic Team.[13]

In 2006 Keith Allain, a Yale alumnus, was named the school's eighth coach in program history and first new head coach in 30 years.[15] Allain coached his first game as head coach on October 21, 2006 when Yale played McGill in an exhibition game. His first NCAA game and NCAA win came on October 27, 2006 against Holy Cross 2–1.[4] After finishing his first season 11–17–3, Allain's Bulldogs rebounded the following season recording a 16 win season. Yale captured the Cleary Cup for ECAC Regular Season Champions in the 2008–09 season. The Bulldogs followed the regular season by sweeping Brown in the ECAC Quarterfinal Round then getting a 4–3 win over St. Lawrence 4–3. In the ECAC Championship, Yale shut out Cornell 5–0 for the program's first ECAC Playoff Championship. The win sent the Bulldogs to the 2009 NCAA Ice Hockey Tournament.[16] After falling 1–4 to Vermont in the NCAA East Regional,[16] Yale finished the season with a record of 24–8–2, the first 20-win season since the 1997–98 season.[6]

The Bulldogs repeated as Cleary Cup Champions in the 2009–10 season and received an at-large bid to the 2010 NCAA Ice Hockey Tournament after falling to Brown 2 games to 1 in a best-of-three quarterfinal round of the ECAC Tournament.[17] The third-seeded Bulldogs faced the second-seeded North Dakota in the NCAA Northeast Regional held in Worcester, Massachusetts.[18] After starting the third period with a three goal lead, Yale held on during a Fighting Sioux comeback to win the game 3–2.[19] The win was the first NCAA Tournament win since 1952.[19] In the second round of the tournament, Yale lost to Boston College in a high scoring game, 7–9.[18][20]

In the 2010–11 NCAA Division I men's ice hockey rankings, the Bulldogs ranked number 1 in the poll in December 2010 for the first time in the history of the poll.[21][22] Yale finished the regular season second in the ECAC but won the ECAC playoffs with a 6–0 win over Cornell in the finals.[23] The Bulldogs advanced into their third consecutive NCAA tournament. Yale was seeded first in the 2011 NCAA Ice Hockey Tournament and placed into the East Regional, held in Bridgeport, Connecticut.[24] In the opening round the Bulldogs came close to an upset but defeated the fourth-seeded Air Force 2–1 in overtime.[25] The win over Air Force sent the hometown Bulldogs to the East Regional Finals where they would take on three-seeded Minnesota–Duluth. The game would become the final game of Yale's season after Minnesota-Duluth defeated Yale 5–3 and eventually went on to win the NCAA Championship.[26] Despite the loss, Yale finished the season 28–7–1, recording the best record in the history of the program.[6]

In the 2012–2013 season, the Bulldogs won another Ivy League Championship.[27] The team finished fourth in the ECAC Tournament after losing to Union 0–5 in the semifinal[28] and falling to Quinnipiac 0–3 in the third-place match.[29] Despite their disappointing showing in the ECAC tournament, the Bulldogs qualified for the last at-large bid in the 2013 NCAA Tournament thanks to Notre Dame's victory over Michigan in the CCHA Tournament final.[30] In the first round of the NCAA Tournament, the 15th-seeded Bulldogs shocked 2nd-seeded Minnesota, winning 3–2 after forward Jesse Root scored 9 seconds into the overtime period, the fastest overtime goal in the history of the NCAA Tournament.[31] The next day, the Bulldogs defeated North Dakota 4–1, earning them their first berth in the Frozen Four in 61 years.[32] In the Frozen Four semifinal, Yale defeated University of Massachusetts Lowell 3–2 on captain Andrew Miller's overtime goal. In the final, the Bulldogs defeated 1st-overall-seeded Quinnipiac 4–0 for their first NCAA Division I Championship.

Ever since the Quinnipiac Bobcats moved to the ECAC, they have become one of Yale's biggest non-Ivy rivals. The rivalry is dubbed the War on Whitney Avenue as the two campuses are separated by a mere 8 miles on Whitney Avenue in Hamden, Connecticut to New Haven, Connecticut. The two teams met on April 13, 2013 for the fourth time in the 2012–13 season in Pittsburgh, Pennsylvania to play for the national championship. Although, Quinnipiac had won the previous three meetings (all in the 2012–13 season) by a combined score of 13–3, Yale shut them out in the national championship game, 4–0.

Starting in 1998, the head coach position has been known as the Malcolm G. Chace Head Hockey Coach as a memorial to Malcolm Chace, an 1896 alumnus and one of the founders of ice hockey in the United States.[35] 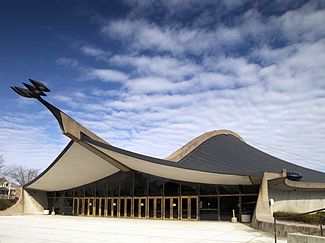