From Infogalactic: the planetary knowledge core
Jump to: navigation, search
For other uses, see Yalta (disambiguation).

The City of Yalta (Ukrainian and Russian: Я́лта; Crimean Tatar: Yalta) is a resort city on the South coast of the Crimean Peninsula surrounded by the Black Sea. It serves as the administrative center of Yalta Municipality, one of the regions within Crimea. Population: 76,746 (2014 Census).[2]

The city is located on the site of an ancient Greek colony, said to have been founded by the Greek conquerors who were looking for a safe shore (γιαλός – yalos in Greek) on which to land. It is situated on a deep bay facing south towards the Black Sea, surrounded by the mountain range Ai-Petri. It has a warm humid subtropical climate and surrounded by numerous vineyards and orchards.[3]

The term "Greater Yalta" is used to designate a part of the Crimean southern coast spanning from Foros in the west to Gurzuf in the east and including the city of Yalta and multiple adjacent urban settlements.

The existence of Yalta was first recorded in the 12th century by an Arab geographer, who described it as a Byzantine port and fishing settlement. It became part of a network of Genoese trading colonies on the Crimean coast in the 14th century, when it was known as Etalita or Galita. Crimea was captured by the Ottoman Empire in 1475, which made it a semi-independent subject territory under the rule of the Crimean Khanate but the southern coast with Yalta was under direct Ottoman rule forming the Eyalet of Kefe (Feodosiya). Yalta was annexed by the Russian Empire in 1783, along with the rest of Crimea, sparking the Russo-Turkish War, 1787-1792. Prior to the annexation of the Crimea, the Crimean Greeks were moved to Mariupol in 1778; one of the villages they established nearby is also called Yalta.

In the 19th century, the town became a fashionable resort for the Russian aristocracy and gentry. Leo Tolstoy spent summers there and Anton Chekhov in 1898 bought a house (the White Dacha) here, where he lived till 1902; Yalta is the setting for Chekhov's short story, "The Lady with the Dog", and such prominent plays as The Three Sisters were written in Yalta. The town was also closely associated with royalty. In 1889 Tsar Alexander III finished construction of Massandra Palace a short distance to the north of Yalta and Nicholas II built the Livadia Palace south-west of the town in 1911.

In the 20th century 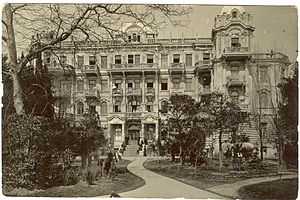 During the 20th century Yalta was the principal holiday resort of the Soviet Union. In 1920, Vladimir Lenin issued a decree "On the Use of Crimea for the Medical Treatment of the Working People" which endorsed the region's transformation from a fairly exclusive resort area into a recreation facility for tired proletarians. Numerous workers' sanatoria were constructed in and around Yalta and the surrounding district. There were, in fact, few other places that Soviet citizens could come for a seaside holiday, as foreign travel was forbidden to all but a handful. The Soviet elite also came to Yalta; the Soviet dictator Joseph Stalin used the Massandra Palace as his summer residence.

The town came to worldwide attention in 1945 when the Yalta Conference between the "Big Three" powers - the Soviet Union, the United States and the United Kingdom - was held at the Livadia Palace. 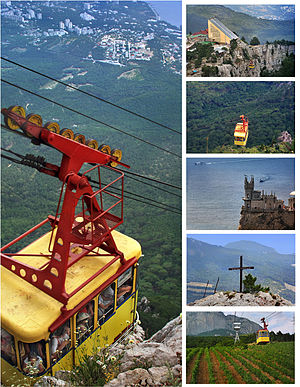 The cableway near Yalta's Ai-Petri peak.

Following the dissolution of the Soviet Union in 1991, Yalta has struggled economically. Many of the nouveaux riches of ex-Soviet citizens began going to other European holiday resorts, now that they had the freedom and money to travel; conversely, the impoverishment of many ex-Soviet citizens meant that they could no longer afford to go to Yalta. The town's transport links have been significantly reduced with the end of almost all passenger traffic by sea. The longest trolleybus line in Europe goes from the train station in Simferopol to Yalta (almost 90 km). Yalta is crowded in the vacation season (July–August) and prices for accommodation are very high. Most of the tourists are from countries of the former Soviet Union; in 2013, about 12% of tourists to the Crimea were Westerners from more than 200 cruise ships.[4]

Yalta has a beautiful embankment along the Black Sea. People can be seen strolling there all seasons of the year, and it also serves as a place to gather and talk, to see and be seen. There are several beaches to the east and west of the embankment. The town has several movie theaters, a drama theater, plenty of restaurants, and several open-air markets.

Two beaches in Yalta are Blue Flag beaches since May 2010, these were the first beaches (with two beaches in Yevpatoria) to be awarded a Blue Flag in a CIS memberstate.[5] 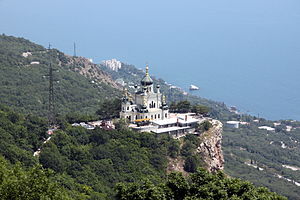 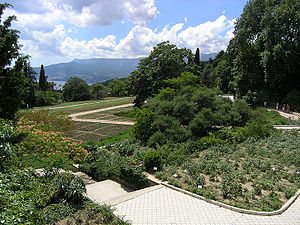 Famous attractions within or near Yalta are:

As Yalta lies to the south of the Crimean Mountains and within an amphitheatre of hills, the climate is very mild. Yalta has a humid subtropical climate (Köppen climate classification: Cfa) that closely borders on a Mediterranean climate.[3] In February, the average temperature reaches 4 °C (39 °F). Snow is rare and what snow the city does receive thaws quickly. In July, the average temperature reaches 24 °C (75 °F). The average annual precipitation is 612 millimetres (24.1 in), most of it being concentrated in the colder months. The sun shines approximately 2,169 hours per year. Since the city is located on the shore of the Black Sea, the weather rarely becomes extremely hot due to the cool sea breezes. The average annual temperature for Yalta is +13 C (56 F). 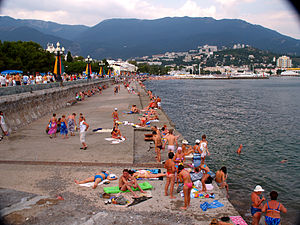 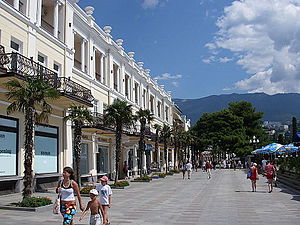 As of the Ukrainian Census conducted on 1 January 2001, the population of Yalta is 80,500. The main ethnic groups of Yalta are: Russians (65.5%), Ukrainians ( 25.7%), Belarusians (1.6%), and Crimean Tatars (1.3%).[8] The predominant language in the streets of the city is Russian. This total number does not comprise the population of neighboring villages and small towns. The metropolitan area population is about 139,500.

Yalta is twinned with the following cities: