Yalta Hotel Complex (Russian: Гостиничный комплекс «Ялта-Интурист») is a hotel in Yalta (Crimea, Ukraine, set in Massandra park on the Black Sea coast. It is one of the major tourist centers in Ukraine.

Yalta-Intourist Hotel Complex was finally built in 1977 with joint effort of Krymspetsstroy local construction company and Union Engineering INGA (Yugoslavia). The design work was performed by A.T. Polyansky, member of the USSR Academy of Fine Arts, architect I.N. Mokshunova, and civil engineers K.N. Vasiliev and Ya.I. Dukhovny. The original design allocated floors 2 to 15 for guest rooms, and lower floors were occupied by public facilities such as cafes, bars, restaurants, an excursion bureau, a souvenir shop, a variety theatre, a post office, and hairdresser’s and barber shops, with independent access to all of those. The top floor with a panoramic view of the environs featured a concert/cinema hall, restaurant, and a sunroom terrace. The beautifully landscaped deck park around the hotel complex was built as a natural extension of the early 19th century Мassandra park. The new park features the Amphora alley, the cypress tree ground, the plane tree ground, the chestnut tree ground, a ‘scalinada’ (steep stairs running up the hill), and fountains ‘Cascade’ and ‘Flora’.

The concept of the hotel complex exterior and interior decoration was developed with participation of Zurab Tsereteli, a famous muralist, painter and sculptor. The essential idea underlying the artistic concept is the poetic world of the Crimean legends. The main building of the hotel reminds one of an ocean liner crowned with a light boat of the ancient seamen. The copper storiated high relief composition above the grand entrance to the hotel is called “the Legends of Crimea” and features the silhouette of the Mount Ayu-Dag, the founders of the city of Yalta, the orchards and villages of the first inhabitants of the Crimean South Coast, the heroes of the Crimean legend about the Adalars (the winged boys), and Maria from the legend of the Bakhchisaray Palace captive. The central hotel lobby used to be decorated with a laced decoration in the shape of a fishing net. The entrance to the Marble restaurant had marble quadrae of fine bas-relief representing the light dance of the girls from the ancient Greek town of Chersonessus. Such distinct signs of the hand of the grand master of arts can be noticed in almost all of the hotel complex premises.

At present, the hotel’s room capacity consists of 1140 rooms of different types (980 standard, 134 semi-deluxe, and 26 de luxe rooms), each featuring a balcony showcasing a scenic view of the sea, the mountains, and the city of Yalta below. 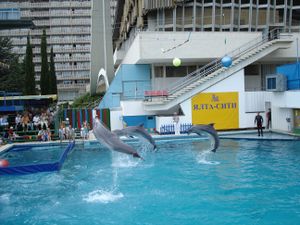