Yamaha Motor Company Limited (ヤマハ発動機株式会社, Yamaha Hatsudōki Kabushiki-gaisha?) is a Japanese manufacturer of motorcycles, marine products such as boats and outboard motors, and other motorized products. The company was established in 1955 upon separation from Yamaha Corporation, and is headquartered in Iwata, Shizuoka, Japan. The company conducts development, production and marketing operations through 109 consolidated subsidiaries as of 2012.

Led by Genichi Kawakami, the company’s first president, Yamaha Motor began production of its first product, the YA-1, in 1955. The 125cc motorcycle won the 3rd Mount Fuji Ascent Race in its class.

The motorcycle division of Yamaha was founded in 1955, and was headed by Genichi Kawakami. Yamaha's initial product was a 125cc two-cycle, single cylinder motorcycle, the YA-1, which was a copy of the German DKW RT125. The YA-1 was a competitive success at racing from the beginning, winning not only the 125cc class in the Mt. Fuji Ascent, but also sweeping the podium with first, second and third place in the All Japan Autobike Endurance Road Race that same year.[1] Early success in racing set the tone for Yamaha, as competition in many varieties of motorcycle racing has been a key endeavor of the company throughout its history, often fueled by a strong rivalry with Honda and other Japanese manufacturers.

Yamaha began competing internationally in 1956 when they entered the Catalina Grand Prix, again with the YA-1, at which they placed sixth. The YA-1 was followed by the YA-2 of 1957, another 125cc two stroke, but with significantly improved frame and suspension.[2] The YD-1 of 1957 was a 250cc two-stroke twin cylinder motorcycle, resembling the YA-2, but with a larger and more powerful motor. A performance version of this bike, the YDS-1 housed the 250cc two-stroke twin in a double downtube cradle frame and offered the first five-speed transmission in a Japanese motorcycle.[3] This period also saw Yamaha offer its first outboard marine engine.

Success and Growth in the 1960s

By 1963 Yamaha's dedication to both the two-stroke engine and racing paid off with their first victory in international competition, at the Belgium GP, where the won the 250cc class. Success in sales was even more impressive, and Yamaha set up the first of its international subsidiaries in this period beginning with Thailand in 1964, the Netherlands in 1968. 1965 saw the release of a 305cc two-stroke twin, the flagship of the companies lineup. It featured a separate oil supply which directly injected oil into the gasoline prior to combustion (traditionally riders had to pre-mix oil into gasoline together before filling the gas tank on two stroke engines). In 1967 a larger new larger displacement model was added to the range, the 350cc two stroke twin R=1.

In 1968 Yamaha launched their first four-stroke motorcycle, the XS-1. The Yamaha XS-1 was a 650cc four-stroke twin, a larger and more powerful machine that equaled the displacement and performance of the popular British bikes of the era, such as the Triumph Bonneville and BSA Gold Star. Yamaha continued on with both the two-stroke line and four-stroke twins at a time that other Japanese manufacturers were increasingly moving to four cylinder four-stroke machines, a trend led by Honda in 1969 with the legendary CB-750 four-stroke four-cylinder cycle.

Not until 1976 would Yamaha answer the other Japanese brands with a multi-cylinder four stroke of their own. The XS-750 (and later 850) a 750cc triple cylinder machine with shaft final drive was introduced almost seven years after Honda's breakthrough bike. Yamaha's first four-cylinder model, the XS-1100 followed in 1978, again with shaft drive.[4] Despite being heavier and more touring oriented than its rivals it produced an impressive string of victories in endurance racing.

The 1970s also saw some of the first dedicated off-road bikes for off-road racing and recreation. Yamaha was an early innovator in dirt-bike technology, and introduced the first single-shock rear suspension, the trademarked "Monoshock" of 1973.[5] It appeared in production on the 1974 Yamaha YZ-250, a model which has continued in production, with many updates, until 2015, making it Yamaha's longest continuous model and name.

Yamaha continued racing throughout the 1960s and 1970s with increasing success in several formats. The decade of the 1970s was capped by the XT500 winning the first Paris-Dakar Rally in 1979.[6]

The 1980s: Diversification and Innovation

By 1980 the combination of consumer preference and environmental regulation made four strokes increasingly popular. Suzuki ended production of their GT two stroke series, including the flagship water-cooled two-stroke 750cc GT-750 in 1977. Kawasaki, who had considerable success throughout the 1970s with their two-stroke triples of 250cc, 350cc, 500cc and 750cc ended production of road-going two strokes in 1980. Yamaha bucked this trend and continued to refine and sell two-strokes for the street into the 1980s. These bikes were performance oriented, water-cooled twin cylinder machines, designed achieve excellent performance taking advantage of the lower weight of two strokes. The RZ-250 of 1980[7] was the progenitor of this series. The RZ-350, the largest displacement model, was a popular hot-rod bike of the 1980s and continued to be sold in some countries into the early 1990s.

Throughout the 1980s the motorcycle industry gradually went from building a few basic but versatile models designed to work well in many roles, to offering many more specialized machines designed to excel in particular niches. These included racing and performance street riding, touring, motocross racing, enduro and recreational off-road riding, and cruising. Yamaha branched out from the relatively small number of UJMs (Universal Japanese Motorcycle) at the start of the decade to a much larger set of offerings in several clearly defined markets at the end of the decade.

The XV750 of 1981 featured an air-cooled V-twin four stroke engine and cruiser styling, and was one of the first Japanese cruiser style motorcycles. By the end of the 1980s Yamaha had offered dozens of cruiser styled bikes in a variety of displacements and engine configurations.

The RZV500 was one of the first "repli-racers", a near copy of Kenny Roberts competition GP bike, it featured a liquid-cooled two-stroke motor of 500cc displacement in a V4 configuration, along with a perimeter frame and full fairing.[8]

A more popular and practical high-performance model for the street was introduced in 1985, the FZ750. It was an innovative 750cc four-stroke inline four cylinder model. It was the first motorcycle to feature a five valve cylinder head, something Yamaha became well known for. It also featured a cylinder block canted forward at 45 degrees, and a box-section steel perimeter frame. Production of the FZ continued until 1991.

The 1990s: Performance Bikes and a Spin-off Brand

In 1998 Yamaha marketed a 1000cc four cylinder road bike called the YZF 'R1', this model introduced a new style of gearbox design which shortened the overall length of the motor/gearbox case, to allow a more compact unit. This, in turn allowed the motor to be placed in the frame further forward, designed to improve handling in a short wheel-based frame.[9]

In 1995, Yamaha announced the creation of Star Motorcycles, a new brand name for its cruiser series of motorcycles in the American market. In other markets, Star motorcycles are still sold under the Yamaha brand. This was an attempt to create a brand identity more closely aligned with the cruiser market segment, one of the largest and most lucrative in the USA.

The 2000s: Expansion and Consolidation

In 2007, Yamaha established the Philippine operations and distributes Yamaha motorcycles under the corporate name of Yamaha Motor Philippines, Inc., one of more than 20 worldwide subsidiaries operating on all continents. 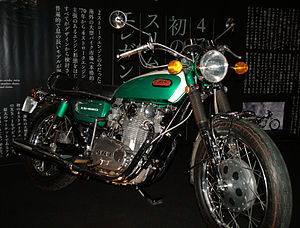 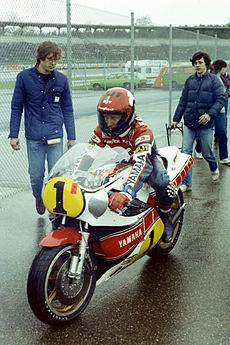 The Yamaha YZ450F won the AMA Supercross Championship two years in a row, in 2008 with Chad Reed, and 2009 James Stewart. Yamaha was the first to build a production monoshock motocross bike (1975 for 250 and 400, 1976 for 125) and one of the first to have a water-cooled motocross production bike (1977 in works bikes, 1981 in off-the-shelf bikes). Yamaha's first Motocross competition four-stroke bike, the YZ400F, won the 1998 USA outdoor national Championship with factory rider Doug Henry.

Yamaha also sponsors several professional ATV riders in several areas of racing, such as cross country racing and motocross. Yamaha has had success in cross country with their YFZ450, ridden by Bill Ballance, winning 9 straight titles since 2000. Yamaha's other major rider, Traci Cecco, has ridden the YFZ450 to 7 titles, with the first in 2000. In ATV motocross, Yamaha has had success with Dustin Nelson and Pat Brown, both who race the YFZ450. Pat Brown's best season was a 3rd place title in 2007, while Nelson has had two 1st place titles in the Yamaha/ITP Quadcross, one in 2006 and the other in 2008.

Yamaha produced Formula One engines from 1989 to 1997, initially for the Zakspeed team, in 1991 for the Brabham BT60Y, in 1992 for the Jordan 192, from 1993 to 1996 for Tyrrell, and in 1997 for the Arrows A18. These never won a race, but drivers including Damon Hill, Ukyo Katayama, Mark Blundell and Andrea de Cesaris scored some acceptable results with them. However their engines were often unreliable and were usually not very powerful.[citation needed]

Teams with Yamaha as an engine supplier

Yamaha Motors is a highly diversified company which produces products for a large number of industries and consumer market segments: 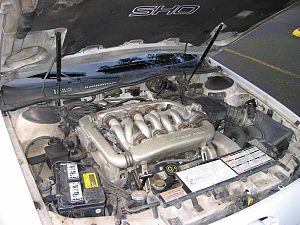 Yamaha has built engines for other manufacturers' vehicles beginning with the development and production of the Toyota 2000GT (1967) with the Toyota Motor Corporation. Also, the cylinder head from the Toyota 4A-GE engine was developed by Yamaha Motor Corporation and was built at Toyota's Shimayama plant alongside the 4A and 2A engines.[12] All performance-oriented cylinder heads on Toyota/Lexus engines were designed and/or built by Yamaha. Some examples are the 1LR-GUE engine found on the 2010–2012 Lexus LFA, the 2UR-GSE found in Lexus ISF, the 3S-GTE engine found on the Toyota Celica GT4 and the 2ZZ-GE engine found on the 1999–2006 Toyota Celica GT-S. In 1984, executives of the Yamaha Motor Corporation signed a contract with the Ford Motor Company to develop, produce, and supply compact 60° 3.0 Liter DOHC V6 engines for transverse application for the 1989–'95 Ford Taurus SHO.[13][14] From 1993 to 1995, the SHO engine was produced in 3.0 and 3.2 Liter versions. Yamaha jointly designed the 3.4 Liter DOHC V-8 engine with Ford for the 1996–'99 SHO. Ford and Yamaha also developed the Zetec-SE branded 4-cylinder engines used in several Ford cars like the small sports car Ford Puma. Since 2005 Yamaha produces a 4.4 Liter V8 for Volvo. The B8444S engines are used in the XC90 and S80 models. British sportscar maker Noble also uses a bi-turbo version of the Volvo V8 in their M600.

Yamaha also tunes engines for other manufacturers, such as Toyota, so Yamaha logos on Toyota S engines.[15] 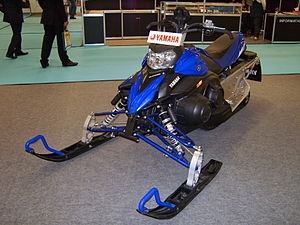 In 2010, Yamaha was the only snowmobile manufacturer to use four-stroke engines across its range.[16] In Canada though, there are still three models that Yamaha manufactures that are still two-stroke. They are the Bravo, VK 540 and the Venture XL. Yamaha had introduced four-strokes to their line-up in 2003, and the line-up became four-stroke based for model year 2005. The RX-1, released in 2003, was the first performance-oriented four-stroke snowmobile on the market. It was not, however, the first modern four-stroke snowmobile produced. That honor belongs to Arctic Cat for their Yellowstone Special, released in 2000, which was designed as a rental sled that could meet Yellowstone National Park's stringent emission requirement. However, Yamaha received much criticism for its weight disadvantage when compared to similar two-strokes, despite its fuel economy and low-range torque. Yamaha is now using four-stroke technology with the introducing of their 80FI engine, which is equipped on the Phazer and Venture Lite models. This engine has one of the highest specific output of any four-stroke in production, with 160 HP/L, Yamaha achieves this even without the use of a forced induction system. Yamaha is also a key player in the "four-stroke wars", which are a series of advertisements from opponent Ski-Doo, who claim their E-tec and power-tec equipped two-strokes are still cleaner and more efficient than four-strokes, while Yamaha still claims the four-strokes are cleaner. Yamaha also broke a multi-year absence from sno-cross in the winter of 2006/2007 with their introduction of a factory race team headed by former Arctic Cat racer Robbie Malinoski.

Yamaha was the first brand to win with a 4-stroke in a professional snowcross race. This happened in 2006 at the WPSA snow cross championship.