From Infogalactic: the planetary knowledge core
Jump to: navigation, search
Not to be confused with Yanma. 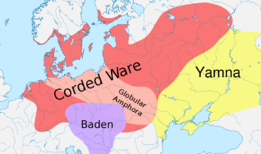 The Yamna culture (also known as the Pit Grave culture or Ochre Grave culture), was a late Copper Age to early Bronze Age culture of the region between the Southern Bug, Dniester and Ural rivers (the Pontic steppe), dating to 3500–2300 BC. The Yamna culture is identified with the late Proto-Indo-Europeans, and is the strongest candidate for the Urheimat (homeland) of the Proto-Indo-European language.

Yamna and Yamnaya are borrowed from Ukrainian: Ямна культура and Russian: Ямная культура respectively, and both mean "pit-grave". The root in both cases is яма (yama) meaning "pit".

The people of the Yamnaya culture were the likely result of admixture between eastern European hunter-gatherers (via whom they also descend from the Mal'ta-Buret' culture or other, closely related people) and a Near Eastern people,[2] with some research identifying the latter as hunter-gatherers from the Caucasus[3] or a related people also related to Chalcolithic people from what is now Iran.[4] Their culture is materially very similar to that of the people of the Afanasevo culture, their contemporaries in the Altai Mountains; furthermore, genetic tests have confirmed that the two groups are genetically indistinguishable.[2]

They are also closely connected to later, Bronze Age cultures which spread throughout Europe and Central Asia, especially the Corded Ware people, but also the Bell Beakers as well as the peoples of the Sintashta, Andronovo, and Srubna cultures. In these groups, there are present several aspects of the Yamna culture (e.g., horse-riding, burial styles, and to some extent the pastoralist economy). Studies have also established that these populations derived large parts of their ancestry from the steppes.[2][5][6]

Modern Central and Northern Europeans are mostly of Yamna heritage.[7]

The Yamna culture originated in the Don-Volga area, and is dated 3300–2500 BC.[8] It was preceded by the middle Volga-based Khvalynsk culture and the Don-based Repin culture (ca. 3950–3300 BC),[9] and late pottery from these two cultures can barely be distinguished from early Yamna pottery.[10]

The early Yamnaya horizon spread quickly across the Pontic-Caspian steppes between ca. 3400 and 3200 BC.[11] According to Anthony, "the spread of the Yamnaya horizon was the material expression of the spread of late Proto-Indo-European across the Pontic-Caspian steppes."[12] Anthony further notes that "the Yamnaya horizon is the visible archaeological expression of a social adjustment to high mobility - the invention of the political infrastructure to manage larger herds from mobile homes based in the steppes."[13] According to Pavel Dolukhanov the emergence of the Pit-Grave culture represents a social development of various local Bronze Age cultures, representing "an expression of social stratification and the emergence of chiefdom-type nomadic social structures", which in turn intensified inter-group contacts between essentially heterogeneous social groups.[14]

According to Jones et al. (2015) and Haak et al. (2015), autosomic tests indicate that the Yamnaya-people were the result of admixture between two different hunter-gatherer populations: distinctive "Eastern European hunter-gatherers" with high affinity to the Mal'ta-Buret' culture or other, closely related people from Siberia[2] and a population of "Caucasus hunter-gatherers" who probably arrived from somewhere in the Near East, probably the Caucasus.[3][web 1] Each of those two populations contributed about half the Yamnaya DNA.[5][web 1] According to co-author Dr. Andrea Manica of the University of Cambridge:

The question of where the Yamnaya come from has been something of a mystery up to now [...] we can now answer that, as we've found that their genetic make-up is a mix of Eastern European hunter-gatherers and a population from this pocket of Caucasus hunter-gatherers who weathered much of the last Ice Age in apparent isolation.[web 1] 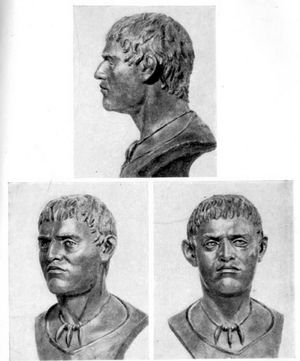 Three genetic studies in 2015 gave support to the Kurgan theory of Gimbutas regarding the Indo-European Urheimat. According to those studies, haplogroups R1b and R1a, now the most common in Europe (R1a is also common in South Asia) would have expanded from the Russian steppes, along with the Indo European languages; they also detected an autosomal component present in modern Europeans which was not present in Neolithic Europeans, which would have been introduced with paternal lineages R1b and R1a, as well as Indo European Languages.[15][16][17]

According to Haak et al. (2015), "Eastern European hunter-gatherers" who inhabited today's Russia were a distinctive population of hunter-gatherers with high affinity to a ~24,000-year-old Siberian from Mal'ta-Buret' culture, or other, closely related people from Siberia.[2][web 1] Remains of the "Eastern European hunter-gatherers" have been found in Mesolithic or early Neolithic sites in Karelia and Samara Oblast, Russia, and put under analysis. Three such hunter-gathering individuals of the male sex have had their DNA results published. Each was found to belong to a different Y-DNA haplogroup: R1a, R1b, and J.[5] R1b is also the most common Y-DNA haplogroup found among both the Yamnaya and modern-day Western Europeans.[2][6]

The Near East population were most likely hunter-gatherers from the Caucasus (CHG)[3] c.q. Iran Chalcolithic related people with a CHG-component, who partially descended from the early neolithic Zagros Farmers.[4]

Jones et al. (2015) analyzed genomes from males from western Georgia, in the Caucasus, from the Late Upper Palaeolithic (13,300 years old) and the Mesolithic (9,700 years old). These two males carried Y-DNA haplogroup: J* and J2a. The researchers found that these Caucasus hunters were probably the source of the farmer-like DNA in the Yamnaya, as the Caucasians were distantly related to the Middle Eastern people who introduced farming in Europe.[web 1] Their genomes showed that a continued mixture of the Caucasians with Middle Eastern took place up to 25,000 years ago, when the coldest period in the last Ice Age started.[web 1]

According to Lazaridis et al. (2016), "a population related to the people of the Iran Chalcolithic contributed ~43% of the ancestry of early Bronze Age populations of the steppe."[4] According to Lazaridis et al. (2016), these Iranian Chalcolithic people were a mixture of "the Neolithic people of western Iran, the Levant, and Caucasus Hunter Gatherers."[4][note 1] 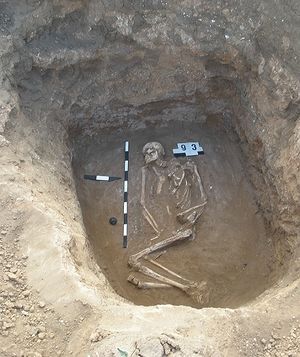 The Yamna culture is identified with the late Proto-Indo-Europeans (PIE) in the Kurgan hypothesis of Marija Gimbutas. It is the strongest candidate for the Urheimat (homeland) of the Proto-Indo-European language, along with the preceding Sredny Stog culture, now that archaeological evidence of the culture and its migrations has been closely tied to the evidence from linguistics[18] and genetics.[2][19] Significantly, animal grave offerings were made (cattle, sheep, goats and horse), a feature associated with Proto-Indo-Europeans.[20] The culture was predominantly nomadic, with some agriculture practiced near rivers and a few hillforts.[21] Characteristic for the culture are the inhumations in pit graves under kurgans (tumuli). The dead bodies were placed in a supine position with bent knees and covered in ochre. Multiple graves have been found in these kurgans, often as later insertions.[citation needed] The earliest remains in Eastern Europe of a wheeled cart were found in the "Storozhova mohyla" kurgan (Dnipropetrovsk, Ukraine, excavated by Trenozhkin A.I.) associated with the Yamna culture.

The genetic basis of a number of physical features of the Yamnaya people were ascertained by the ancient DNA study conducted by Haak et al. (2015), Wilde et al.(2014), Mathieson et al. (2015) : they were genetically tall (phenotypic height is determined by both genetics and environmental factors), overwhelmingly dark-eyed (brown), dark-haired and had a skin colour that was moderately light, though somewhat darker than that of the average modern European.[22][5] Despite their pastoral lifestyle, there was little evidence of lactase persistence.[23]

Haak et al. (2015) conducted a genome wide study of 69 ancient skeletons from Europe and Russia. They concluded that Yamnaya autosomal characteristics are very close to the Corded Ware culture people, with an estimated a 73% ancestral contribution from the Yamnaya DNA in the DNA of Corded Ware skeletons from Germany. The same study estimated a 40–54% ancestral contribution of the Yamnaya in the DNA of modern Central & Northern Europeans, and a 20–32% contribution in modern Southern Europeans, excluding Sardinians (7.1% or less), and to a lesser extent Sicilians (11.6% or less).[2][19][web 2] Haak et al. also note that their results "suggest" that haplogroups R1b and R1a "spread into Europe from the East after 3,000 BC."[24]

Autosomal tests also indicate that the Yamnaya are the most likely vector for "Ancient North Eurasian" admixture into Europe.[2] "Ancient North Eurasian" is the name given in literature to a genetic component that represents descent from the people of the Mal'ta-Buret' culture[2] or a population closely related to them. That genetic component is visible in tests of the Yamna people[2] as well as modern-day Europeans, but not of Europeans predating the Bronze Age.[25]

Lazaridis et al. (2016) "While the Early/Middle Bronze Age ‘Yamnaya’-related group (Steppe_EMBA) is a good genetic match (together with Neolithic Iran) for ANI (Ancestral North Indians), the later Middle/Late Bronze Age steppe population (Steppe_MLBA) is not."[26][note 2] Lazaridis et al. (2016) "The demographic impact of steppe related populations on South Asia was substantial, as the Mala, a south Indian population with minimal ANI along the ‘Indian Cline’ of such ancestry is inferred to have ~18% steppe-related ancestry, while the Kalash of Pakistan are inferred to have ~50%, similar to present-day northern Europeans."[26] Lazardie et al. (2016) study estimated 50%-30% steppe related admixture in Northern South Asians and 20% to 6% in Southern South Asians.[27][note 3]

Lazaridis et al. (2016) further notes that "A useful direction of future research is a more comprehensive sampling of ancient DNA from steppe populations, as well as populations of central Asia (east of Iran and south of the steppe), which may reveal more proximate sources of the ANI than the ones considered here, and of South Asia to determine the trajectory of population change in the area directly."[28]

Cite error: <ref> tags exist for a group named "note", but no corresponding <references group="note"/> tag was found, or a closing </ref> is missing