Yamoussoukro (/ˌjæmʊˈsuːkroʊ/)[1] is the political capital and administrative capital city of Ivory Coast and an autonomous district of the country. As of the 2014 preliminary census, the district had a population of 355,573 inhabitants. Located 240 kilometers (150 mi) north-west of Abidjan, the administrative centre on the coast, upon rolling hills and plains, the municipality covers 3,500 square kilometers (1,400 sq mi).

In the 2014 census, the autonomous district had a population of 355,573. The city of Yamoussoukro (as opposed to the district) had 281,071 inhabitants, making it the fifth-most populous city in Ivory Coast.

The current governor of the district is Augustin Thiam.

Yamoussoukro is pronounced "Yam-So-Kro" by Ivorians. It is rarer to hear "Ya-Mu-So-Kro"; the second u is silent.[citation needed]

Stone tools found in the country from hundreds of thousands of years ago show that the area around Yamoussoukro has been occupied since ancient times. Due to the desertification of the Sahara, many North Africans moved south for the better climate.

Queen Yamousso, the niece of Kouass N'Go, ran the city of N'Gokro in 1929 at the time of French colonization. The village then comprised 429 inhabitants, and was one of 134 Akoué cities.[citation needed]

Diplomatic and commercial relations were then established, but in 1909, on the orders of the Chief of Djamlabo, the Akoué revolted against the administration. Bonzi station, 7 kilometres (4.3 mi) from Yamoussoukro on the Bouaflé road, was set on fire, and the French administrator, Simon Maurice, was spared only by the intervention of Kouassi N'Go. This respected former leader persuaded the Akoué not to wage a war that could only have turned into a disaster.[citation needed]

As the situation got worse, Maurice, judging that Bonzi had become safe, decided to transfer the French military station to Yamoussoukro, where the French Administration built a pyramid to the memory of Kouassi N'Go, Chief of the Akoué. In homage to queen Yamousso, N'Gokro was renamed Yamoussoukro.[citation needed]

In 1919, the civil station of Yamoussoukro was removed. Félix Houphouët-Boigny became the leader of the village in 1939. A long period passed wherein Yamoussoukro, still a small agricultural town, remained in the shadows. This continued until after the Second World War, which saw the creation of the African Agricultural Trade Union, as well as the first conferences of its chief. However, it was only with independence that Yamoussoukro finally started to rise.[citation needed]

After 1964, the President Félix Houphouët-Boigny made ambitious plans and started to build. One day in 1965, later called the Great Lesson of Yamoussoukro, he visited the plantations with the leaders of the county, inviting them to transpose to their own villages the efforts and agricultural achievements of the region. On 21 July 1977, Houphouët offered his plantations to the State.

In March 1983, President Houphouët-Boigny made Yamoussoukro the political and administrative capital of Ivory Coast, as the city was his birthplace. This marked the fourth movement of the country's capital city in a century. Ivory Coast's previous capital cities were Grand-Bassam (1893), Bingerville (1900), and Abidjan (1933). The majority of economic activity still takes place in Abidjan, and it is officially designated as the "economic capital" of the country. 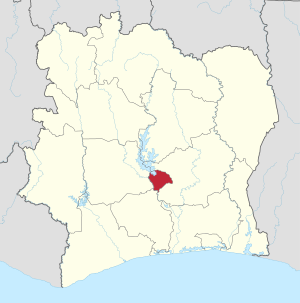 Location of the autonomous district of Yamoussoukro 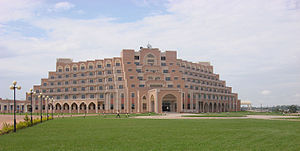 House of Deputies in Yamoussoukro

Yamoussoukro is the site of what is claimed to be the largest Christian place of worship:[citation needed] The Basilica of Our Lady of Peace, consecrated by Pope John Paul II on 10 September 1990.

Also noteworthy are the Kossou Dam, the PDCI-RDA House and the various schools of the Félix Houphouët-Boigny National Polytechnic Institute. The international airport (with an average of six hundred passengers and 36 flights in 1995, it is one of two airports in Africa (with Gbadolite) that could accommodate the Concorde), the Town Hall, the Protestant Temple, the Mosque, and the Palace of Hosts.

On 6 November 2004, Yamoussoukro Airport was attacked by French infantry after military aircraft from the airport bombed a UN peacekeeper base as well as rebel targets, 9 French peacekeepers and one U.S. civilian were killed. Two Ivorian Sukhoi Su-25 aircraft and several Mil Mi-24 helicopters were destroyed, which was most of the country's air forces. Mobs and rebels tried to attack the French forces after the airport raid.

On 30 March 2011, the city of Yamoussoukro fell to forces led by Alassane Ouattara, who had been recognized internationally as president of Ivory Coast.[3]