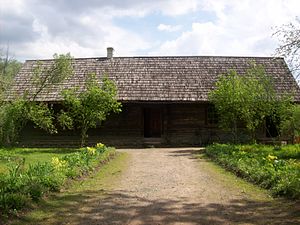 Kupala was born on July 7, 1882 in Viazynka, a folwark settlement near Maladzyechna. His family was noble, although both of Kupala's parents were employed as tenant farmers at the folwark. Kupala was thus essentially born into a landless peasant class. Kupala received a traditional Belarusian education, completing his studies in 1898. Following the death of his father in 1902, Kupala worked a variety of short-term jobs, including as a tutor, a shop assistant, and a record keeper.

Kupala's first serious literary attempt was Ziarno, a Polish-language sentimental poem which he completed around 1903–1904 under the pseudonym "K-a." His first Belarusian-language work ("Мая доля") was dated July 15, 1904. Kupala's first published poem, "Мужык" ("Peasant"), was published approximately a year later, appearing in Belarusian in the Russophone Belarusian newspaper Severo-Zapadnyi Krai (Northwestern Krai) on May 11, 1905. A number of subsequent poems by Kupala appeared in the Belarusian-language newspaper Nasha Niva from 1906 to 1907.

In Vilnius and St. Petersburg

Kupala moved to Vilnius in 1908, where he continued with his career as a poet. The same year the first published collection of his poems, Жалейка (The Little Flute) brought on the ire of the czarist government, which ordered the book confiscated as an anti-government publication. The order for Kupala's arrest was revoked in 1909, but a second printing was again confiscated, this time by the local authorities in Vilnius. Kupala ceased working for the Nasha Niva in order to avoid ruining the reputation of the newspaper.

Kupala left for Saint Petersburg in 1909. The subsequent year saw the publication of several works, including the poem Адвечная песьня (Eternal Song), which appeared as a book in St. Petersburg in July 1910. Сон на кургане (Dream on a Barrow)– completed in August 1910 –symbolised the poor state of Kupala's Belarusian homeland. Kupala left St. Petersburg and returned to Vilnius in 1913. Among those influencing Kupala in the 1910s was Maxim Gorky.

During the Soviet period

Kupala's writing changed to an optimistic tone following the Great October Revolution of 1917. Among Kupala's numerous translations into the Belarusian language were the internationalist-Marxist anthem The Internationale and an ancient epic poem The Tale of Igor's Campaign (translated in 1921).[1][2] Nevertheless, Kupala maintained his connections with the anti-Soviet oriented nationalist emigres of the Belarusian People's Republic, who exhorted that he join them in exile in Czechoslovakia during a trip abroad in 1927. At home, the newly established authorities considered him with some distrust–at times, criticism of Kupala in the press mounted insofar as Kupala's activities were regarded as too oriented around nationalism. This period stopped once Kupala printed a public letter of apology in the 1930s.

Kupala was awarded the Order of Lenin in 1941 for the poetry collection Ад сэрца (From the Heart).

With the Occupation of Belarus by Nazi Germany in 1941, because of being very ill he moved to Moscow and then to Tatarstan. But even from there he wrote poems supporting the Belarusian partisans fighting against Nazi Germany. He died in Moscow in 1942, having fallen down the stairwell in Hotel Moskva.

Kupala became recognised as a symbol of culture of Belarus during the Soviet era. A museum, organised in Minsk through the efforts of his widow in 1945, is the leading literary museum in Belarus. Hrodna State University was named after Yanka Kupala.