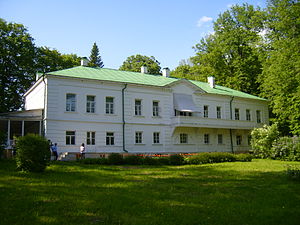 Tolstoy was born, wrote War and Peace and Anna Karenina in the house and is buried nearby. Tolstoy called Yasnaya Polyana his "inaccessible literary stronghold".[1] It is 12 kilometres (7.5 mi) southwest of Tula, Russia, and 200 kilometres (120 mi) from Moscow.

In June 1921, the estate was nationalized and formally became his memorial museum. It was at first run by Alexandra Tolstaya, the writer's daughter. The current director of the museum is Vladimir Tolstoy, also one of Tolstoy's descendants.[2] The museum contains Tolstoy's personal effects and movables, as well as his library of 22,000 volumes. The estate-museum contains the writer's mansion, the school he founded for peasant children and a park where Tolstoy's unadorned grave is situated.

The estate of Yasnaya Polyana was originally owned by the Kartsev family. At the end of the 18th century it was purchased by Prince Nikolai Volkonskiy, the grandfather of the writer, who created a formal French garden and an English landscape garden, as well as long alleys of birch and oak trees.[3]

The house passed from Nikolai Volkonskiy to his only daughter, Maria Nikolayevna, the mother of Leo Tolstoy. Her husband, Nikolai Ilyich Tolstoy, a veteran of the war against Napoleon in 1812, built a 32-room house and an ensemble of work buildings, and enlarged the park. 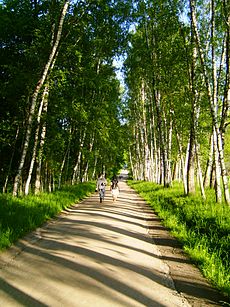 Leo Tolstoy was born on September 9, 1828 in a house (since demolished) at Yasnaya Polyana. His parents died when he was very young, and he was raised there by relatives. In 1856, after he finished his military service, he moved into a house, which had been one wing of the previous mansion, and brought his wife there in 1862.

At the time Tolstoy lived there, the Yasnaya Polyana estate had about four thousand acres (16 km²), on a gently sloping hillside with dense original forest (The Forest of the Old Order) at the upper end, and a series of four ponds at different levels. There were four clusters of peasant houses, with about 350 peasants living and working on the estate.[4]

Tolstoy wrote War and Peace at Yasnaya Polyana between 1862 and 1869, and wrote Anna Karenina there between 1873 and 1877. He wrote the novels in his study by hand in very small handwriting, with many additions and deletions and notes, and gave the draft to his wife, who made a clean copy at night, which Tolstoy then rewrote the next day. Each chapter went through five or six drafts, and she recopied War and Peace seven times before it was finished. All the drafts were saved by his wife and are now in the Rumyantsev Museum in Moscow.[5]

Tolstoy's thirteen children, of whom four died in childhood, were all born at Yasnaya Polyana. They were born on the same leather couch where Tolstoy himself was born, which was kept in his study next to his writing desk, and is still there today.

When he was living and working at Yasnaya Polyana, Tolstoy awakened at 7:00 a.m., did physical exercises, and walked in the park, before starting his writing. During the harvest season he often worked in the fields with the peasants, both for physical exercise and to make his writing about peasant life more realistic. He also visited the school for peasant children which he had created in one building, where he told stories to the children.[6]

Tolstoy entertained almost all the important Russian cultural and artistic figures of his time at Yasnaya Poloyana; his guests included Anton Chekhov, Turgenev, Maxim Gorky, the painters Valentin Serov, and Ilya Repin, and many others. 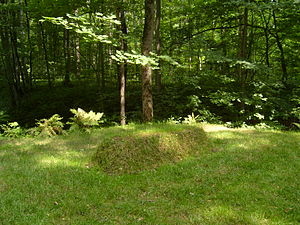 In 1911, Tolstoy's widow Sofia Alexandrovna applied to Tsar Nicholas II to have Yasnaya Polyana made into a state museum. The Tsar refused, but did grant a pension to the family which allowed the house and estate to be preserved as they were.

In 1919, the Soviet Government formally put Yasnaya Polyana under the protection of the state, and in June 1921 Yasnaya Polyana was nationalized and became a state museum, receiving 3,147 visitors in its first year.[7]

In October 1941, as the Germans approached Moscow, 110 crates filled with the exhibits of the museum were evacuated to Moscow, and then to Tomsk. The estate was occupied by the Germans for 45 days, who turned the Leo Tolstoy House into a hospital, and German soldiers who died in the hospital were buried around Tolstoy's grave.[8] A fire during the occupation damaged the upper floor of the house. Following the war the estate was restored to the way it looked when Count Tolstoy lived there.[9] Soviet propaganda made use of the Germans' disregard of the house's cultural value in the 1942 war documentary film Moscow Strikes Back.[10] 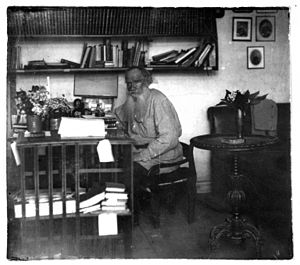 Tolstoy in his study in 1908, taken by Prokudin-Gorsky

The house of Leo Tolstoy had originally been a wing of the larger house, built by Tolstoy's father, where Tolstoy was born. Tolstoy was forced to sell the main part of the old house, which was dismantled and moved to another estate, leaving only the two wings. Leo Tolstoy moved into one of the wings in 1856, and lived there for more than fifty years. He brought his wife to live with him there in 1862, and enlarged the house to make more space for his growing family. The house today is kept as it appeared when he died in 1910.[11]

The Kuzminsky wing, like the house of Leo Tolstoy, was originally part of the large house built by Tolstoy's father, and later demolished. In 1859 Tolstoy turned it into a school for the peasant children of his estate, where he practised his theories of education. After 1862 it became the home of the younger sister of his wife, Tatyana Andreyevna Kuzminskiy, and her family.

The Volkonskiy house, where Tolstoy's grandfather Nikolai lived, is the oldest structure on the estate. During Tolstoy's time it was the home of servants. Later the east wing of the house became the studio of Tolstoy's daughter Tatyana, who was a painter.

Long before he died Tolstoy announced the place where he wanted to be buried; in a small clearing called "the place of the green wand", next to a long ravine in a part of the old forest called the Forest of the Old Order (Старый Заказ, Stariy Zakaz) because cutting trees there had been forbidden since the time of his grandfather, and many trees there were over a hundred years old. The name 'place of the green wand' had been given by Tolstoy's older brother Nikolai, who said that the person who found the magic wand there would never die or be ill. He and his brother frequently sat in the darkness in the clearing and talked.[12]