Karskiy was described by his contemporaries as extremely industrious, accurate, self-organized, and reserved in behavior. He was acclaimed as a scientist of the highest integrity.[1] Karskiy's input into contemporary Slavistics, especially into the Belarusian branch, was immense. The first significant revisions of Karskiy's views on the development of the Church Slavonic and Russian languages were proposed much later, by Viktor Vinogradov. One of the best known works of Karskiy is Belarusians.

Yefim Karskiy was born in Lasha (in Grodno Governorate, now Hrodna Voblast), to the family of teacher F. Novitskiy and Orthodox deacon’s daughter M. Novitskaya. Initially, he bore the family name of his mother, Novitskiy. With his family, he spent his childhood years in Navahrudak and Minsk regions of Belarus. He studied in Folk School (Russian: народное училище) at Yatra, (Navahrudak uyezd) during the 1870s, and in 1874 enrolled in the Minsk Ecclesiastical School, where he joined the Seminary. Around 1881 he became interested in ethnography, and left his ecclesiastical studies to join the Nezhin historical-philological institute. His first philological research paper was published in 1883 in the Russian Philological Courier.

Karskiy graduated from the Nezhin historical-philological institute in 1885 in the field of Russian and Slavonic philology. Observing the absence of scientific analysis of the Belarusian language, he published his first major scientific work Review of Sounds and Forms of Belarusian Language in 1886. Upon his graduation he taught Russian and Church Slavonic languages and Russian literature in the Vil’na Liceum No.2 in Vilnius, where he also served as the secretary and as elected member of the Resources Committee. He passed his magisterial examination in 1891, and in 1893 left the Liceum and began teaching Russian language in Warsaw University. During his tenure there he also taught Slavonic paleography, Russian dialectology, and Church Slavonic grammar. He would defended his magisterial thesis To the history of sounds and forms of the Belarusian talk at Kiev University, which was the first published academic dissertation concerned with the Belarusian language. He would continue his studies of the Belarusian language, and in 1898 he began studying the local dialects of the Belarusian people, both by the literary artifacts and by ethnographic tours to the Grodno, Vil’na, Minsk regions, among others. In 1901 Karskiy became an associated member of Saint Petersburg Academy of Sciences, deptartment of Russian language and literacy.

Karskiy's seminal seven-volume work Belarusians is considered to be the "Belarusian philology encyclopedia, unique by the extent and depth of the material",[2] "uncomparable [sic] to any other study of Slavonic people in exhaustiveness".[3] This work was the first to scientifically disprove the concept of the linguistic identity between the Russian and the Old Belarusian language, and from this argued for the existence of a distinct Belarusian nationality, presenting to a wider world the richness of the Belarusian traditional culture. This work "opened the eyes of Belarusians to see themselves as a real nation",[4] putting them (in the beginning of the 20th century) "unexpectedly at the head of all the Slavonic people in the scientific knowledge about their language"[5] Karskiy published the first volume in 1903, with the last being published almost two decades later in 1922. Around this time it was being published in Belarusian in the newspapers "Zvon" and "Byelarus’".

Karskiy's views of the ethnic history and areal of Belarusians were revised by V. K. Bandarchyk (c. 1998–1999). The significant amendments to the Karskiy's history of the oral folklore were made by A. S. Fyadosik (c. 1998) and others.

From 1905 to 1910 Karskiy served two terms as the rector of Warsaw University. After the end of his second term in 1910, he refused to remain at the position in protest of the policies of Imperial Minister of Education Lev Kasso. He moved to Petrograd in 1916 and became a member of Saint Petersburg Academy of Sciences, with specialization in ethnography and linguistics. He taught at Petrograd Imperial University, and was a founder member of the Commission for the Study of the Tribal Composition of the Population of the Borderlands of Russia. In 1918, forced by the economic ruin in Petrograd from World War I and the October Revolution, Karskiy moved to Minsk. He was given tenure at Minsk Pedagogical Institute, but was dismissed from his position the following year, shortly before being arrested by the Extraordinary Commission.[6] He was not held for long, and that same year moved back to Petrograd. He resumed his teaching at Petrograd University, staying through it's rechristening as Leningrad University in 1924. He also returned to the Saint Petersburg Academy of Sciences (at that point the Academy of Sciences of the USSR) where he became Head of the Museum of Anthropology and Ethnography. In 1922 he donated his personal library to the newly created Belarusian State University. Beginning in 1926 he made scientific visits to Poland, Czechoslovakia, and Yugoslavia. His reports from these visits were highly appreciated by the USSR Academy of Sciences, but they began to have political repercussions for him. He began to butt heads with the leadership of the Academy, and in 1927 he became the target of a sharp political critique in the newspapers "Zvyazda" (Myensk) and "Pravda" (Moscow). His membership in the USSR Academy of Sciences was put under question, and despite enjoying a certain amount of political patronage he wasn’t given the room in the press to defend himself. In 1929, he was elected for the member of the Czech Academy of Sciences. The following year, however, he was abruptly removed from the position of the Director of the Peter the Great Museum of Anthropology and Ethnography in Leningrad.

For his teaching and research activities, Karskiy was given the civil rank of "real state’s counselor" (?). He was decorated with orders of St. Stanislaus III grade (1889) and II grade (1899), St. Anna III grade (1895) and II grade (1903), St. Vladimir IV grade (1911), various medals. In recognition of his research on the Belarusian ethnography, he was awarded the Great Golden Medal of the Russian Geographical Society (1894), the Golden Medals of Batyushkov of the Russian Academy of Sciences (1898, 1902), Minor Lomonosov Prize of Russian Academy of Sciences (1901), Batyushkov Academical Prize (1910), and Akhmatov Academical Prize (1913).

In 1964, a memorial for Karski was opened at the Lasha School. 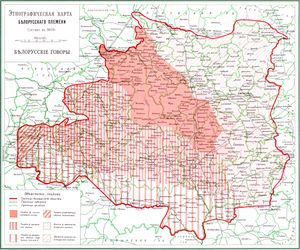 Karskiy was the author of at least 100 significant scientific works. Some of the major ones are listed below. It is worth noting that in case of the older publications, the actual dates of the publications may be different than the dates on the front pages.