Yefim Georgievich Yevdokimov (Russian: Ефи́м Гео́ргиевич Евдоки́мов, 20 January [O.S. 8 January] 1891 – 2 February 1940)[1] was a Soviet politician and member of the Cheka. He was a key figure in the Red Terror, the Great Purge and dekulakization that saw millions of people executed and deported.

Yevdokimov himself was arrested on 9 November 1938 and executed 2 February 1940. He was posthumously rehabilitated in 1956.[1] 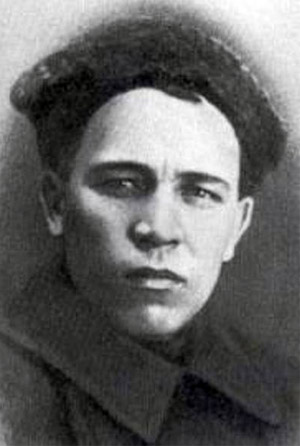 Yevdokimov was born in Kopal, Semirechye Oblast, Russian Empire (now Qapal, Kazakhstan). His father, Georgy Savvateyevich Yevdokimov, was a peasant from Kursk who joined the Semirechye Cossacks. In Semirechye he married a young peasant, Anastasia Arkhipovna. After Yefim was born in 1891, the family decided to move to Chita.[2] He was in prison at the time of the 1917 revolution, reputedly as a criminal rather than for political reasons, but was freed by the revolution, and joined Cheka. In the late 1920s, he was chief of the OGPU in the North Caucasus region, based in Rostov. In this capacity he is reputed to have initiated the purge that culminated in the Shakhty trial, the first Stalinist show trial, against the wishes of his superior, Vyacheslav Menzhinsky.[3] He was barred from further promotion in the secret police, but switched to party work as First Secretary of the North Caucasus Regional Committee of the CPSU in January 1934. During the Great Purge, in 1937, he presided over a ruthless purge of the party and police apparatus in the region. This included having friends of the writer Mikhail Sholokhov arrested. He also twice asked Stalin for permission to have Sholokhov arrested, but was refused. In February 1938, Sholokhov wrote to Stalin complaining that Yevdokimov was a "crafty, lame old fox" and either an enemy of the people or "a sorry old geezer."[4] On 4 May 1938, he was transferred to Moscow as Deputy People's Commissar for Water Transport, under N.I.Yezhov, but was arrested on 9 November, along with his wife, Maria, and teenage son, Yuri, after Lavrenti Beria had wrested control of the secret police from Yezhov. He held out for five months being forced to confess to having plotted to assassinate Stalin and others. On 16 January 1940, Yevdokimov, his wife, and 17 year old son were all included with Yezhov, the writer Isaac Babel, on a list drawn up by Beria of 346 people who were to be executed. He was shot on 2 February 1940. His wife and son were also shot. Yevdokimov was rehabilitated in 1956.

On 19 July 1935, the village of Medvezhensky (now Krasnogvardeyskoye, Stavropol Krai) was renamed "Yevdokimovsky" in honor of Yevdokimov, the first secretary of the North Caucasus Krai. After Yevdokimov's arrest as an "enemy of the people" in 1938, the town was renamed Molotov.[7]