Yekaterina Vasylievna Budanova (Cyrillic: Екатерина Васильевна Буданова), also known as Katya Budanova (Катя Буданова), (6[3] December 1916 – 19 July 1943), was a fighter pilot in the Soviet Air Force during World War II. With 11 air victories,[4] along with Lydia Litvyak, she was one of the world's two female fighter aces. She was shot down by either Luftwaffe ace Georg Schwientek of JG 52 or ace Emil Bitsch, of JG 3.

Budanova was born into a peasant family in Konoplanka village in Smolensk Oblast. After leaving elementary school with the highest grades, she had to abandon her studies due to her father's death, and began working as a nanny.[5] At the age of thirteen her mother sent her to join her sister in Moscow, where she began working as a carpenter in an aircraft factory.[5] It was there that she began an interest in aviation, and she joined an aeroclub's parachutist section, obtaining her flying licence in 1934 and graduating to flight instructor in 1937.[5] She took part in several air parades, flying the single-seater Yakovlev UT-1.[5]

After the German attack on the USSR in June 1941, she enlisted in military aviation and was assigned to the 586th Fighter Regiment (586 IAP), formed by Marina Raskova. This unit consisted entirely of female pilots and was equipped with Yak-1. Initially all women pilots were placed into three all-women units; the 586th IAP, the 587th BAP and the 588th NBAP. The 500 designations were originally meant to signify defense reserves. These units were originally made up women who were flight instructors or members of pre-war flying clubs. As the Battle of Stalingrad raged the supply of replacement male pilots was drying up and thus the 586th (under Major Tamara Kazarinova) saw combat action in the spring 1942.

In May 1942 the 586th IAP redeployed to Anisovka where it was assigned to the 144th IAD (Air Defence) covering the railway installations near Saratov, and it was here Budanova flew her first combat missions. Seeing the skill of these women, the Soviet High Command began dispersing selected female pilots to existing male units. On 10 September she was assigned with Lydia Litvyak, Maria M. Kuznetsova and Raisa Beliaeva to the 437th IAP, based in Verkhnania Akhtuba on the east bank of the Volga river [6] engaged in the fighting over Stalingrad. The 437th was a LaGG-3 regiment, under Major Khvostikov, who was initially skeptical of the ability of women pilots. But in a short time Budanova became known for her aggressive attacking and high piloting skill. 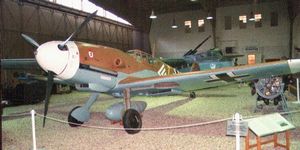 Restored Messerschmitt Bf 109G: The first plane shot down by Katya Budanova was, reportedly, an aircraft of this type 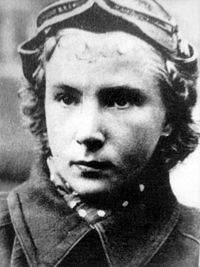 According to some historians, she shot down her first opponent — a Messerschmitt Bf 109 fighter — on 14 September 1942, combining forces with Lydia Litvyak.[7] According to regiment archivist Ekaterina K. Polunina on 2 October 1942 Budanova achieved her two first solo air victories, shooting down a Junkers Ju 88 and a Bf 109.[8] However, Budanova's aircraft mechanic, Inna Pasportnikova wrote that she shot down her first aircraft on 6 October when she attacked 13 Ju 88 bombers, downing one.[9]

From October until January 1943 Budanova (and Litvyak) served in the Stalingrad area with the elite 9th Guards Fighter Regiment, commanded by Lev Shestakov, Hero of Soviet Union. This regiment consisted either of aces or potential aces.[10] One of them was Vladimir Dmitrievich Lavrinenkov, who ended the war with 46 victories (11 shared).[11] He later recalled that Budanova "was tall, kept her hair cut short,... and in her flightsuit hardly stood out from the fellows." He characterized Budanova as a "cheerful, lively character" while Litvyak looked "thoughtful and quiet".[1] Both he said were excellent pilots. Initially the two females they had flown together but then more often flew separately as wingmen to other pilots.[12] While in the Stalingrad area, an order was received citing the return of the women aircrew to the 586th. Pasportnikova later recalled "Budanova and Litvyak appealed to Lt.Col Shestakov, the commander of the 9th Fighter Regiment, with a request to let them remain in the regiment." They were allowed to stay, remaining with 9th IAP for over three months.[1]

On 10 December Budanova shot down two Messerschmitt Bf 110s.[8] In the following months she was credited with several more aircraft.

Bf 110; Budanova shot down two aircraft of this type on 10 December 1942, her first double kill

In January 1943 the 9th was re-equipped with the US-built P-39 "Airacobra" and Budanova and Litvyak moved to the 296th Fighter Aviation Regiment (later the 73rd Guards Fighter Aviation Regiment) of Nikolai Baranov, and continued to fly the Yak.[13] It was with 73 IAP that Budanova and Litvyak achieved the bulk of their combat claims. Budanova was selected to fly with Baranov, while squadron commander Alexei Solomatin took Litvyak as wingman.[12]

Budanova was soon given permission for "solo hunting", an honor given to aggressive and successful pilots.

On 10 February 1943, near Rostov on Don, she shot down a Focke-Wulf Fw 190 along with Starshij Lejtenant Nikolaj Demkin and the wingman, Lejtenant Boris Gorkhiver.[8]

On 20 April 1943 Ogonek, a political-literary weekly publication intended for young adults, featured a cover photo of Budanova and Litvyak. An article detailed their accomplishments, honouring - in true Soviet style - their collective, rather than individual, achievements. The magazine gave a combined number of combat missions and kills to date for the two pilots.[1] On 30 May under command of Soshnikov, Budanova shared in the destruction of another Bf 109.[8]

By June 1943 Budanova had six victories to her credit, and operating near Rostov on Don during the liberation of Donbas, heavy air combat saw her claims raised to 11.[2]

On 19 July 1943 she flew her last mission, near Novokrasnovka. That morning she took off for an escort mission and near Antratsit in Luhansk Oblast she was involved in a dogfight with Bf 109s. Inna Pasportnikova later recalled:

"She spotted three Messerschmitt going on the attack against a group of bombers. Katia attacked and diverted the enemy. A desperate fight developed in the air. Katia managed to pick up an enemy aircraft in her sight and riddle him with bullets. This was the fifth aircraft she killed personally. Katia's fighter rapidly soared upward and swooped down on a second enemy aircraft. She "stitched" it with bullets, and the second Messer, streaming black smoke, escaped to the west. But Katia's red starred fighter had been hit; tongues of flame were already licking at the wings."[1]

Budanova managed to put out the fire and force landed in no-man's land. By the time local farmers came to pull her from the aircraft, she was already dead. They buried her on the outskirts of the village of Novokrasnovka.[1] The pilots who shot her down were Georg Schwientek of JG 52 or Emil Bitsch, of 8./JG 3, the only two pilots that claimed a Yak-1 on Novokrasnovka on 19 July 1943.

Controversies about number of victories

There have been several different versions of Budanova's aerial victory score published, with no official tally. The most common quoted is for 11 kills (6 individual and 5 shared). According to some historians she achieved 11 individual air victories.[14]

Pasportnikova has stated that Budanova had five personal kills at the time of her death.[1] She was twice awarded Order of the Patriotic War. Although she was proposed for the title of Hero of the Soviet Union during the war she did not receive it officially. In 1 October 1993 she was posthumously awarded with the title Hero of the Russian Federation.