The Yemeni Air Force (Arabic: القوات الجوية اليمنية‎‎; transliterated: al-Quwwat al-Jawwiya al-Yamaniya) is the air operations branch of the Yemeni Armed Forces. It is equipped with both eastern and western types of aircraft. Numbers of aircraft can not be confirmed but servicibility of these aircraft is low. Aircraft have been acquired by donations from other countries or either supporting both the Soviet Union or the United States during the Cold War. However, most of the air force was destroyed by airstrikes conducted by a coalition of Arab states during the 2015 military intervention in Yemen.

The Yemen Air Force, known as al-Quwwat al-Jawwiya al-Yamaniya, was established in 1926. During the mid-1950s, the Imam of Yemen established a private fleet that was run by the military. Later, the Soviets delivered MiG-15 and MiG-17 fighters, followed by MiG-21s to the South Yemen Air Force. The northern Yemen Arab Republic (YAR) had ties with Western-oriented countries, and they supported a new air force. In the 1970s, Saudi Arabia donated F-5E and F-5B fighters, and two Lockheed C-130H Hercules transport aircraft. The Yemen Arab Republic Air Force (YARAF) aircraft markings are the basis of the current roundel and flag, which come from the North Yemen's support of the United Arab Republic between 1958 and 1961.

The South Arabian Air Force (as an air corps of the Federation of South Arabia under British protection) was supported by the British and received BAC Strikemaster Mk 81s, De Havilland Canada DHC-2 Beavers, Jet Provost Mk52As and Bell 47G helicopters. The PRSY/PDRY AF (as an air corps of the independent Southern Yemen after Nov. 1967) aircraft markings were a light blue triangle with a dark outer part and a red star in the center while the fin-flash consisted of a flag in the national tricolour with a blue triangle bearing a red star. This was used as the fin-flash until the unification of Yemen in 1990.

The USSR supported the People's Democratic Republic of Yemen and Soviet Air Force MiG-23BN and MiG-25R were based in Aden starting from the late Seventies. During the South Yemen Civil War in January 1986, the Soviet MiG-23BN flew strikes in support of loyalist forces. Up to 90% of the South Yemen Air Force was wiped out during the conflict[1] It is not clear if these MiG-23 were ever transferred to the South Yemen control and later to the unified Yemeni Air Force or they always remained under Soviet control and withdrew later.[2]

The Yemeni air force was created in conjunction with the unification of southern - and northern Yemen in 1990. Many of the aircraft used by Yemen are from South Yemen and only a small percentage from North Yemen due to the fact that South Yemen was an ally of the Soviet Union during the Cold War and the Soviets supplied them with military hardware. After the fall of the Soviet Union, South Yemen stopped receiving Soviet made fighters. Yemen has used fighters and bombers, mainly in the 1994 civil war to bomb the city of Aden. There were also reports of the use English Electric Lightning fighters in the North Yemen Civil War. They were used by Saudi Arabia since Yemen never owned any Lightnings.

Yemeni Air Force has been used extensively in the Sadah War against the Houthi rebellion. The Yemeni Air Force has been proven effective destroying enemy positions and buildings. Most enemy casualties were attributed to air raids. A number of accidents have occurred, including one in which a fighter plane accidentally fired a missile and killed more than 80 civilians. During Operation Scorched Earth on 2 and 5 October and on 8 November 2009, three fighter jets reported as a MiG-21 and two Su-22 respectively crashed during military missions. The government claimed the crashes were due to technical malfunctions, while the rebels claimed they shot them down with MANPADS.[8][9]

As part of the Yemeni al-Qaeda crackdown, the Yemeni Air Force have launched air raids on terrorist bases throughout Yemen to kill important terrorist leaders. The raids were confronted with antiaircraft fire.[10]

The Yemeni Air Force performed air strikes against opposition forces to the Saleh government during the 2011 Yemeni uprising. On 28 September 2011, a Su-22 was shot down during a bombing mission north of Sanaa by rebel soldiers using a MANPADS.[11] The pilot ejected and was captured.

On 30 October, the al-Dailami air base, which shares the structures with Sana'a International Airport, was attacked by uprising forces. Different official sources reported two or three fighter jets destroyed on the ground either by mortar shells or with planted explosive charges.[12] The aircraft were loaded with ammunition and combat ready for strikes on the next day. Among the destroyed aircraft, at least one MiG-29 was reported.[13]

On 19 March 2015, a first air raid against the internationally recognized Yemeni president Abd Rabbuh Mansur Hadi, indicated that at least some elements of the Yemeni Air Force had switched allegiance to fight alongside the Houthis rebels.

On 25 March 2015, two Yemeni Air Force aircraft, probably Su-22, took off from Sana'a al-Dailami air base, which was under Houthis control, to launch an attack on the Yemeni president’s residence in the al-Maasheeq district of Aden, becoming the third time in a week that elements of the Air Force acted against the internationally recognized government.[14]

Few hours later, the Saudi-led intervention in Yemen (2015–present) began. The Yemeni Air Force did not completely join the Houthi rebels, as most of the personnel refused to take orders from their former enemy. Also the maintenance of the air-frames was mostly halted since the ousting of the Saleh regime in 2012[15][16] and thus, at the beginning of 2015, the situation of the Air Force seemed chaotic with most of the personnel deserted and air-frames lacking maintenance, effectively preventing the Yemeni Air Force to enter in the fight, remaining grounded during the Saudi-led intervention.[17]

During the opening strikes in March 2015, it appeared that the Coalition strikes did not hit the main combat assets of the Yemeni Air Force, with limited attacks on the runways, secondary airport structures and logistics air-frames, even in face of fighter jets parked in the open. During the initial strikes at al-Dailami airbase, pictures of the single CN-235-300M, one Beechcraft Super King Air, one AB-412 and one UH-1H destroyed or damaged on the ground emerged. It is not clear if the Saudi coalition decided to spare the military aircraft in the opening hours and then this decision changed, or the initial strikes failed to hit the military planes which were subsequently hit by the following strikes.[18][19] Other sources reported that the initial strikes also targeted a number of Su-22s and F-5 jet fighters.[20]

Indeed, in the following few days, the coalition strikes started targeting the structures and air-frames to a more severe extent. On 15 April 2015, a Saudi debriefing showed the Arab coalition strikers destroying two Su-22 and one F-5 jet fighters while they were sitting on the tarmac. The F-5 looked covered by a net, while the Su-22s were parked in the open.[21][22] Another picture showing the wrecks of two Su-22 and one F-5 jets emerged on 30 April 2015.[23] On 4 May 2015, evidence of a Yemeni Il-76TD at Sana'a International Airport engulfed in flames emerged.[24]

The fate of the Yemeni MiG-29 fleet remains unknown while the assessment on the actual number of other air-frames destroyed is difficult to establish.

The actual number of flyable aircraft of each type may be close to few or zero.[25] 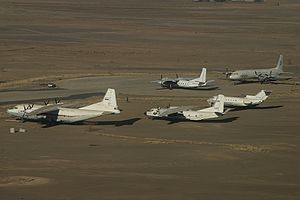 The Air Defense, once separated from the Air Force, according to the standard Soviet segregation of armed forces, was merged into the Air Force.[29] Up to more than six hundred Surface-to-air missile launchers may have been procured over the time, including MANPADS, mostly if not all of Soviet and Russian origin. 12 Tor missile systems were ordered and tested in 2007.[30] As of 2015, their status is unknown, if ever delivered. At the start of the 2015 Saudi-led intervention in Yemen, similarly to the status of the rest of the Air Force, the Air Defense looked in a bad shape with a small fraction of missile batteries at limited to none readiness status, hampered by obsolescence, lack of spare parts and desertions. As the rest of the armed forces, a number of installations were reported switching side, siding with the Houthis rebels. Nevertheless, the Saudi coalition reported hitting a number of S-75 Dvina, S-125 and 2K12 Kub Air defense installations in the opening strikes in March 2015.[31] Strikes on Air Defense units were reported as late as early May 2015.[32] Defensive Anti-Aircraft Artillery (AAA) fire was clearly visible at night over Sana'a till mid April.[33]