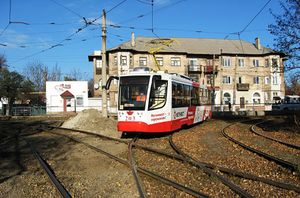 Yenakiieve (Ukrainian: Єнáкієве, Yenakiieve; Russian: Ена́киево, Yenakiyevo) is a city in the Donetsk Oblast (province) of eastern Ukraine and is incorporated as a city of oblast significance, a special status within the region equal to that of a raion (district). The city is located on the Krynka River about 60 kilometres (37 mi) from the oblast's administrative center, Donetsk. Population: 82,629 (2013 est.)[1].

Yenakiieve is an important regional centre of coal mining, metallurgy, chemical production and manufacturing. The city's outdated industry has caused accidents like that of a gas explosion which occurred in June 2008 at one of Yenakiieve's coal mines.

Yenakiieve was founded in 1898 when numerous workers settlements around the Peter's Iron and Steel Works were united into a single settlement named after Fyodor Yenakiyev. Its first coal mines were established already in 1883. The settlement was incorporated as a city in 1925.

The city is known as the birthplace of the former President of Ukraine, Viktor Yanukovych.

Permanent settlements on the territory of present-day Yenakiieve were founded in 1783. In 1858 Sofiyevsky coal mine was opened there. At the same time Petrovsky cast-iron plant was constructed (today Yenakiyeve Iron and Steel Works).

In 1895 engineers F. Yenakiev and B. Yalovetsky and several Belgian businessmen founded a Russian-Belgian metallurgic society which by 1897 constructed a new Petrovsky cast-iron plant around the settlement Fyodorovka. Coal mines were opened around the plant. Settlements were formed near them and in 1898 they were united into one called Enakievsky after the founder of the Russian-Belgian metallurgic society. The writer A. I. Kuprin who worked at the plant in 1896 described workers’ lives in the story “Molokh”. Before World War I several plants were built in Yenakiieve: coke chemical, brick, beer brewing and butter making. Petrovsky plant became one of the largest metallurgic plants (3rd place) in southern Russia. In 1913 it produced 349,200 tons of cast-iron and 316,400 tons of steel. As a result of ruin after World War I and Civil War of 1919-1921 Petrovsky plant was the only one producing steel. By 1925 the population in Yenakiieve was 34,000, it was referred to as a town.

During World War II Yenakiieve was under siege from Italian army auxiliary units that were seconded to the German Army. They were followed by German units. The city was attacked from 31 October 1941 and not freed until 3 September 1943. Street fighting was fierce between the end of November and beginning of December 1941. “Recruitment” of civilians (ostarbeiter = east workers) began in December 1941. In 1950 about 12 or so Italian POWs (prisoners of war) were put on trial, over atrocities in Yenakiieve (including the destruction of a hospital). Apparently no convictions were registered, and by 1954 all Italian POWs were returned to Italy.

In 1950s several plants were put into operation: of ferro-concrete items, of construction material, of house building and automobile-repairing. On September 16, 1979, on the territory of Yenakiieve in the mine “Yuny Communar” there was one of the Nuclear Explosions for the National Economy - an object “Klivazh”. In 2002 the mine was closed as non-perspective and environmentalists worry about the danger of filling the mine with water. It might cause radioactive pollution of the underground water. That’s why pumps continue to pump the water out of the abandoned mine.

In the War in Donbass the city was captured by pro-Russian separatists[3] when on 13 April 2014 pro-Russian activists captured its town hall and declared that the city was part of the separatist Donetsk Peoples Republic.[4] (Only) the city suburb Uglegorsk stayed under control of the Ukrainian authorities.[5]