From Infogalactic: the planetary knowledge core
Jump to: navigation, search
This article is about the Slabodka yeshiva that functioned in Lithuania until World War II. For other yeshivas connected with Slabodka, see Slabodka yeshiva. 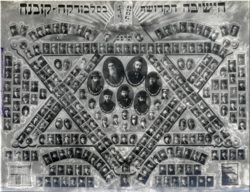 Portraits of rabbis and students of the Yeshiva of Vilijampolė (Slobodka), 1922

Yeshivas Knesses Yisrael was a yeshiva located in the Lithuanian town of Slabodka, adjacent to Kovno (Kaunas), now Vilijampolė, a suburb of Kaunas. It was known colloquially as the "mother of yeshivas" and was devoted to high-level study of the Talmud. It functioned from the late 19th century until World War II.

From the second half of the 19th century, Kovno became a center of Jewish cultural activity in Lithuania. Prominent there were Rabbi Yitzchak Elchanan Spektor (the "Kovner Rav"; officiated 1864-96); Abraham Mapu, one of the first modern Hebrew writers; and Israel Isidor Elyashev, the "Ba'al Makhshoves", the first Yiddish literary critic. The yeshivot of Slobodka, in particular the Or HaChaim yeshivah founded by Tzvi Levitan about 1863, attracted students from other countries and were headed by noted scholars. Rabbi Nosson Tzvi Finkel, also known as "Der Alter fun Slabodka" (The Elder of Slabodka), introduced Musar ideals there. Headed by the rosh yeshiva, Rabbi Moshe Mordechai Epstein, the Alter's yeshiva was known as the Slobodka yeshivah from 1881. Subsequently there was opposition among the students to the Musar method, and in 1897 the yeshivah was divided into two. The followers of Musar established the Knesses Yisrael yeshivah, named after Rabbi Yisroel Salanter, while its opponents founded the Knesset Beit Yitzchak yeshivah, named after Rabbi Spektor.[1]

The yeshiva ceased operation during the Holocaust. 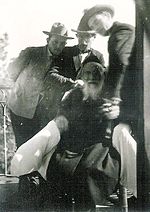 The Alter of Slabodka surrounded by students in Hebron.

A 1924 edict requiring enlistment in the military or supplementary secular studies in the yeshiva led a large number of students in the Slabodka yeshiva to relocate to Palestine. The Alter of Slabodka sent Rabbi Avraham Grodzinski to head this group and establish the yeshiva in Hebron.[2] A branch was also established in Bnei Brak.