Yevgeny Pavlovich Leonov (Russian: Евгений Павлович Леонов; 2 September 1926 – 29 January 1994) was a famous Russian/Soviet actor who played main parts in several of the most famous Soviet films. Called "one of Russia's best-loved actors",[1] he also provided the voice for many Soviet cartoon characters, including Vinny Pukh (Winnie-the-Pooh).

While growing up in a typical Moscow family, he dreamed of becoming a war-plane pilot, which was a very common desire of many boys of the World War II period. This is also often attributed to the fact that his father worked in an airplane factory. During the Great Patriotic War he and his whole family worked in a weapon manufacturing/aviation factory.[2] After the war, he joined the Moscow Art Theatre school, where he studied under Mikhail Yanshin.

In his first film, Leonov was cast as an extra and did not receive any recognition. He later became a Georgi Daneliya regular, appearing in all of his features, including Gentlemen of Fortune, Autumn Marathon, Mimino, Afonya and Kin-dza-dza!. According to the Allmovie, "his short, round stature, expressive eyes, broad and open face, slow movements, and slightly slurred speech made him ideal for the comic roles in which he specialized". But he also attracted critical notice for his tragic parts and the invariable naturalness of his acting. Many notable actors were said to avoid appearing in the same films with Leonov, for his natural manner of acting made them seem strained. 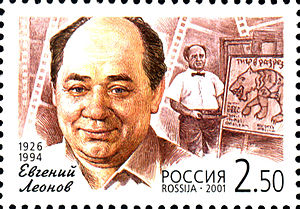 Despite Leonov's brief appearance in Danelia's Autumn Marathon (1980) (one of his most popular films), the role won him the Best Actor at the Venice Film Festival. In Autumn Marathon, it is said, Leonov brilliantly demonstrates the typical Leonov anti-hero. He gave a hilarious portrayal of a simple, nosey man who drank too much and who adored nothing more than talking nonsense as long as anyone could stand it. Among the other films he was instrumental in raising to the classic level were Gentlemen of Fortune and The Belorussia Station, both made in 1971.[2] Like all of Leonov's movies, they are frequently rerun on television. Reportedly, "Leonov was to Russians what Fernandel was to the French."[1] He performed over 200 roles and was the Russian cinema's best-known supporting actor.[1]

In 1991, when touring in Germany, he suffered a massive heart attack, which put him into a coma for 10 days. His life was saved only after major surgery and Leonov recovered – only to begin a schedule of performances at the Leninski Komsomol Theatre (also called the Lenkom Theatre).[1]

In 1993, a year before his death, Leonov was asked during a film festival "What years in the Russian theatre's life were the most productive?" Leonov replied:

Leonov died on 29 January 1994 on his way to the Lenkom Theatre to perform in The Prayer For The Dead (A Memorial Prayer[2]).[1] When his death was announced in the auditorium, the audience spontaneously flooded into the church across the road and lit candles in mourning.[1] Over half a million people turned out in freezing conditions for a procession to a memorial service.[1] He is buried in Novodevichy cemetery in Moscow near other outstanding figures of Russian culture.[4]