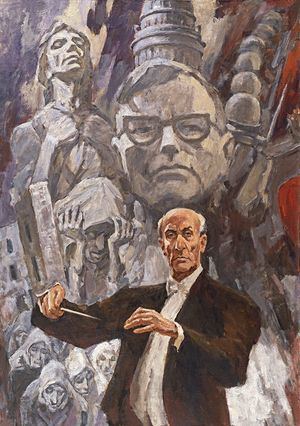 Mravinsky was born in Saint Petersburg. The soprano Yevgeniya Mravina was his aunt. His father died in 1918, and in that same year, he began to work backstage at the Mariinsky Theatre. He first studied biology at the university in Leningrad, before going to the Leningrad Conservatory to study music. He served as a ballet repetiteur from 1923 to 1931. His first public conducting appearance was in 1929. Through the 1930s he conducted at the Kirov Ballet and Bolshoi Opera. In September 1938, he won the All-Union Conductors Competition in Moscow.

Legend has it that at the first performance of Shostakovich's Symphony No. 5, during the applause immediately after the performance, Mravinsky took the score in his hand and waved it above his head. Mravinsky gave world premieres of six symphonies by Shostakovich: numbers 5, 6, 8 (which Shostakovich dedicated to Mravinsky), 9, 10 and finally 12 in 1961. His refusal to conduct the premiere of Shostakovich's 13th Symphony in 1962 caused a permanent rupture in their friendship.

He premiered Sergei Prokofiev's sixth symphony in Leningrad the year of its composition (1947, [1]).

Mravinsky made commercial studio recordings from 1938 to 1961. His issued recordings from after 1961 were taken from live concerts. His final recording was from an April 1984 live performance of Shostakovich's Symphony No. 12.

Mravinsky first went on tour abroad in 1946, including performances in Finland and in Czechoslovakia (at the Prague Spring Festival). Later tours with orchestra included a June 1956 itinerary to West Germany, East Germany, Austria and Switzerland. Their only tour to Great Britain was in September 1960 to the Edinburgh Festival and the Royal Festival Hall, London. Their first tour to Japan was in May 1973. Their last foreign tour was in 1984, to West Germany.

Recordings reveal Mravinsky to have an extraordinary technical control over the orchestra, especially over dynamics. He was also a very exciting conductor, frequently changing tempo in order to heighten the musical effect for which he was striving, often making prominent use of brass instrumentation. Surviving videos show that Mravinsky had a sober appearance[2] at the podium, making simple but very clear gestures, often without a baton. The critic David Fanning has memorably described some of Mravinsky's Tchaikovsky performances:

The Leningrad Philharmonic play like a wild stallion, only just held in check by the willpower of its master. Every smallest movement is placed with fierce pride; at any moment it may break into such a frenzied gallop that you hardly know whether to feel exhilarated or terrified". [2]'

In a 1970s interview on Leningrad Television, when asked how he chose a particular interpretation of the music he conducted, Mravinsky explained that he tried to understand what the composer's intention was by immersing himself in the "atmosphere" of the music (he used the term "atmospherization").