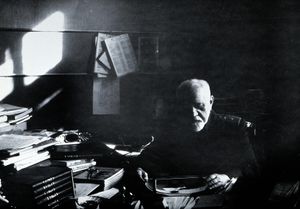 Pavlovsky by LJ Bruce-Chwatt from the Wellcome Collection

Yevgeny Nikanorovich Pavlovsky (Russian: Евге́ний Никано́рович Павло́вский ; February 22 (N.S. March 5), 1884, today’s Voronezh Oblast – May 27, 1965, Leningrad) was a Soviet zoologist, entomologist, academician of the Academy of Sciences of the USSR (1939), the Academy of Medical Sciences of the USSR (1944), honorary member of the Tajik Academy of Sciences (1951), and a lieutenant-general of the Red Army Medical Service in World War II.

In 1908, Yevgeny Pavlovsky graduated from the Military Medical Academy in Petersburg (he became a professor at his alma mater in 1921). In 1933-1944, he worked at the All-union Institute of Experimental Medicine in Leningrad and simultaneously at the Tajik branch of the Soviet Academy of Sciences (1937–1951). Yevgeny Pavlovsky held the post of the director of the Zoology Institute of the Soviet Academy of Sciences in 1942-1962. In 1946, he was appointed head of the Department of Parasitology & Medical Zoology at the Institute of Epidemiology & Microbiology of the Soviet Academy of Medical Sciences. Yevgeny Pavlovsky was the president of the Soviet Geographical Society in 1952-1964. Under Pavlovsky’s direction, they organized numerous complex expeditions to the Central Asia, Transcaucasus, Crimea, Russian Far East and other regions of the Soviet Union to study endemic parasitic and transmissible diseases (tick-borne relapsing fever, tick-borne encephalitis, Pappataci fever, leishmaniasis etc.). Yevgeny Pavlovsky introduced the concept of natural nidality of human diseases, defined by the idea that microscale disease foci are determined by the entire ecosystem. This concept laid the foundation for the elaboration of a number of preventive measures and promoted the development of the environmental trend in parasitology (together with the works of parasitologist Valentin Dogel). Yevgeny Pavlovsky researched host organism as a habitat for parasites (parasitocenosis), numerous matters of regional and landscape parasitology, life cycles of a number of parasites, pathogenesis of helminth infection. Pavlovsky and his fellow scientists researched the fauna of flying blood-sucking insects (gnat) and methods of controlling them and venomous animals and characteristics of their venom.

Evgeny Pavlovsky’s principal works are dedicated to the matters of parasitology. He authored several textbooks and manuals on parasitology. Pavlovsky was a deputy of the Supreme Soviet of the USSR of the 2nd, 3rd, and 4th convocations. He was a recipient of the Stalin State Prize (1941, 1950), the Lenin Prize (1965), the Mechnikov Gold Medal of the Academy of Sciences of the USSR (1949), and gold medal of the Soviet Geographical Society (1954). Yevgeny Pavlovsky was awarded five Orders of Lenin, four other orders, and numerous medals.