From Infogalactic: the planetary knowledge core
Jump to: navigation, search
This name uses Eastern Slavic naming customs; the patronymic is Maksimovich and the family name is Primakov.

Yevgeny Maksimovich Primakov (Russian: Евге́ний Макси́мович Примако́в, tr. Yevgeniy Maksimovich Primakov; 29 October 1929 – 26 June 2015) was a Russian politician and diplomat who served as Prime Minister of Russia from 1998 to 1999. During his long career, he also served as Foreign Minister, Speaker of the Supreme Soviet of the Soviet Union, and chief of the intelligence service. Primakov was an academician (Arabist) and a member of the Presidium of the Russian Academy of Sciences.

Primakov was born in Kiev, Ukrainian SSR, Soviet Union, now Ukraine, and grew up in Tbilisi, Georgian SSR. His mother was a doctor and cousin of the famous physiologist ru. His father, according to most records, was repressed in the Gulag, and Primakov never knew him well. His father was Russian, his mother was Jewish.[1] His mother's original surname has been reported as Finkelstein or Kirschenblatt.[2][3] He was educated at the Moscow Institute of Oriental Studies, graduating in 1953 and did postgraduate work at Moscow State University. From 1956 to 1970, he worked as a journalist for Soviet radio and a Middle Eastern correspondent for Pravda newspaper. During this time, he was sent frequently on intelligence missions to the Middle East and the United States as a KGB co-optee under codename MAKSIM.[4][5] 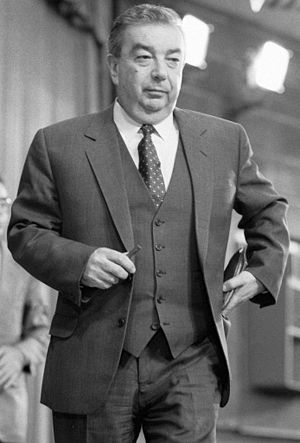 Primakov became involved in politics in 1989, as the Chairman of the Soviet of the Union, one of two houses of the Soviet parliament. From 1990 until 1991 he was a member of Soviet leader Mikhail Gorbachev's Presidential Council.[6] He served as Gorbachev's special envoy to Iraq in the run-up to the Persian Gulf War, in which capacity he held talks with President Saddam Hussein.[7] After the failed August 1991 putsch, Primakov was appointed First Deputy Chairman of the KGB. After the formation of the Russian Federation, Primakov was appointed Director of the Foreign Intelligence Service SVR, serving in that position from 1991 until 1996.[6]

Primakov served as Minister of Foreign Affairs from January 1996 until September 1998. As foreign minister, he gained respect at home and abroad the reputation as a tough but pragmatic supporter of Russia's interests[8] and as an opponent of NATO's expansion into the former Eastern bloc, though on 27 May 1997, after 5 months of negotiation with NATO Secretary general Javier Solana, Russia signed the Foundation Act,[9] which is seen as marking the end of cold war hostilities. He supported Slobodan Milošević during the Yugoslav Wars.[10]

He was also famously an advocate of multilateralism as an alternative to American global hegemony following the collapse of the USSR and the end of the Cold War. Primakov called for a Russian foreign policy based on low-cost mediation while expanding influence towards the Middle East and the former Soviet republics.[11][12] Beginning in 1999, he promoted Russia, China, and India as a "strategic triangle" to counterbalance the United States. The move was interpreted by some observers as an agreement to fight together against 'color revolutions' in Central Asia.[13][14]

After Yeltsin's bid to reinstate Viktor Chernomyrdin as Russian prime minister was blocked by the State Duma in September 1998, the President turned to Primakov as a compromise figure whom he rightly judged would be accepted by the parliament's majority. As prime minister, Primakov was given credit for forcing some very difficult reforms in Russia, most of them, such as the tax reform, became major successes.[15] While his opposition to perceived US unilateralism was popular among Russians, it also led to a breach with the West during the 1999 NATO bombing of Yugoslavia, and isolated Russia during subsequent developments in the former Yugoslavia.[16]

On 24 March 1999, Primakov was heading to Washington, D.C. for an official visit. Flying over the Atlantic Ocean, he learned that NATO had started to bomb Yugoslavia. Primakov decided to cancel the visit, ordered the plane to turn around over the ocean and returned to Moscow in a manoeuvre popularly dubbed "Primakov's Loop".[17]

Yeltsin fired Primakov on 12 May 1999, ostensibly over the sluggish pace of the Russian economy. Many analysts ascribed the firing of Primakov as a reaction to his fear of losing power to a more successful and popular person,[18][19] although sources close to Yeltsin said at the time that the president viewed Primakov as being too close to the Communist Party.[20] Primakov had refused to dismiss Communist ministers while the Communist Party was leading the process of preparing unsuccessful impeachment proceedings against the president.[21] Ultimately, Yeltsin resigned at the end of the year and was succeeded by his last prime minister, Vladimir Putin.[22]

Before Yeltsin’s resignation, Primakov supported the Fatherland – All Russia electoral faction, which at that time was the major opponent of the pro-Putin Unity, and launched his presidential bid.[23] Initially considered the man to beat, Primakov was rapidly overtaken by the factions loyal to Vladimir Putin in the Duma elections in December 1999.[24] Primakov officially abandoned the presidential race in his TV address on 4 February 2000[25] less than two months before the 26 March presidential elections. Soon he became an adviser to Putin and a political ally.[26] On 14 December 2001, Primakov became President of the Russian Chamber of Commerce and Industry, a position he held until 2011.[27] In February and March 2003, he visited Iraq and talked with Iraqi President Saddam Hussein, as a special representative of President Vladimir Putin. He brought to Baghdad a message from Putin to call for Saddam to resign voluntarily.[28] He tried to prevent the 2003 U.S.-led invasion of Iraq, a move which received some support from several nations opposed to the war. Primakov suggested that Saddam must hand over all Iraq's weapons of mass destruction to the United Nations, among other things. However, the Iraqi leader told Primakov he was confident that no harm would befall him personally[29]—a belief that was later proven incorrect. Primakov later claimed Saddam's execution in 2006 was rushed to prevent him from revealing information on Iraq–United States relations that could embarrass the U.S. government.[30]

In November 2004, Primakov testified in defense of the former Yugoslav President Slobodan Milošević, on trial for war crimes.[31] He had earlier led a Russian delegation that met with Milošević during the NATO bombing of Yugoslavia in 1999.[32]

Primakov stepped down as President of the Russian Chamber of Commerce and Industry on 4 March 2011.[33]

Since 1988, Primakov was the Academician Secretary of the World Economy and International Relations Division, director of the Institute of World Economy and International Relations and the member of the Presidium of the USSR Academy of Sciences. On 26 May 2008, Primakov was elected as a member of the Presidium of the Russian Academy of Sciences.[34] In 2009, the University of Niš, Serbia awarded Primakov an honorary doctorate.[35]

Primakov died in Moscow after prolonged illness at the age of 85.[36] He was buried with military honours at Novodevichy Cemetery.[37]