Yevgeny Ivanovich Zamyatin[1] (Russian: Евге́ний Ива́нович Замя́тин; IPA: [jɪvˈɡʲenʲɪj ɪˈvanəvʲɪtɕ zɐˈmʲætʲɪn]; January 20 (Julian) / February 1 (Gregorian), 1884 – March 10, 1937) was a Russian author of science fiction and political satire. He is most famous for his 1921 novel We, a story set in a dystopian future police state. Despite having been a prominent Old Bolshevik, Zamyatin was deeply disturbed by the policies pursued by the CPSU following the October Revolution. In 1921, We became the first work banned by the Soviet censorship board. Ultimately, Zamyatin arranged for We to be smuggled to the West for publication. The subsequent outrage this sparked within the Party and the Union of Soviet Writers led directly to Zamyatin's successful request for exile from his homeland. Due to his use of literature to criticize Soviet society, Zamyatin has been referred to as one of the first Soviet dissidents.

Zamyatin was born in Lebedyan, Tambov Governorate, 300 km (186 mi) south of Moscow. His father was a Russian Orthodox priest and schoolmaster, and his mother a musician. In a 1922 essay, Zamyatin recalled, "You will see a very lonely child, without companions of his own age, on his stomach, over a book, or under the piano, on which his mother is playing Chopin."[2]

He may have had synesthesia since he gave letters and sounds qualities. For example, he saw the letter "Л" as having pale, cold, and light blue qualities.[3]

He studied naval engineering in Saint Petersburg from 1902 until 1908, during which time he joined the Bolsheviks. He was arrested during the Russian Revolution of 1905 and sent into internal exile in Siberia. However, he escaped and returned to Saint Petersburg where he lived illegally before moving to the Grand Duchy of Finland in 1906 to finish his studies.

After returning to Russia, he began to write fiction as a hobby. He was arrested and exiled a second time in 1911, but amnestied in 1913. His Uyezdnoye (A Provincial Tale) in 1913, which satirized life in a small Russian town, brought him a degree of fame. The next year he was tried for maligning the Imperial Russian Military in his story Na Kulichkakh (At the world's end). He continued to contribute articles to various Marxist newspapers.

After graduating as an engineer for the Imperial Russian Navy, Zamyatin worked professionally at home and abroad. In 1916 he was sent to the United Kingdom to supervise the construction of icebreakers [4] at the shipyards in Walker and Wallsend while living in Newcastle upon Tyne.

Zamyatin later recalled, "In England, I built ships, looked at ruined castles, listened to the thud of bombs dropped by German zeppelins, and wrote The Islanders. I regret that I did not see the February Revolution, and know only the October Revolution (I returned to Petersburg, past German submarines, in a ship with lights out, wearing a life belt the whole time, just in time for October). This is the same as never having been in love and waking up one morning already married for ten years or so.."[5]

Zamyatin's The Islanders, satirizing English life, and the similarly themed A Fisher of Men, were both published after his return to Russia in late 1917. After the Russian Revolution of 1917 he edited several journals, lectured on writing, and edited Russian translations of works by Jack London, O. Henry, H. G. Wells, and others. Zamyatin originally supported the October Revolution, but opposed the increasing use of censorship which followed.

His works became increasingly satirical and critical toward the CPSU. Although he supported them before they came to power he slowly came to disagree more and more with their policies, particularly those regarding censorship of the arts. In his 1921 essay "I Am Afraid," Zamyatin wrote: "True literature can only exist when it is created, not by diligent and reliable officials, but by madmen, hermits, heretics, dreamers, rebels and skeptics." [6] This attitude made his position increasingly difficult as the 1920s wore on. In 1923, Zamyatin arranged for the manuscript of his novel We to be smuggled to E.P. Dutton and Company in New York City. After being translated into English by Gregory Zilboorg, the novel was published in 1924.

Then, in 1927, Zamyatin went much further. He smuggled the original Russian text to Marc Lvovich Slonim (1894–1976), then editor of a Russian émigré journal and publishing house based in Prague. To the fury of the State, copies of the Slonim edition began being smuggled back to the USSR and secretly passed from hand to hand. Zamyatin's dealing with Western publishers triggered a mass offensive by the Soviet State against him. As a result, he was blacklisted from publishing anything in his homeland.

We has often been discussed as a political satire aimed at the police state of the Soviet Union. There are many other dimensions, however. It may variously be examined as (1) a polemic against the optimistic scientific socialism of H. G. Wells, whose works Zamyatin had previously published, and with the heroic verses of the (Russian) Proletarian Poets, (2) as an example of Expressionist theory, and (3) as an illustration of the archetype theories of Carl Jung as applied to literature. George Orwell believed that Aldous Huxley's Brave New World (1932) must be partly derived from We.[7] However, in a 1962 letter to Christopher Collins, Huxley says that he wrote Brave New World as a reaction to H.G. Wells' utopias long before he had heard of We.[8][9] Kurt Vonnegut said that in writing Player Piano (1952) he "cheerfully ripped off the plot of Brave New World, whose plot had been cheerfully ripped off from Yevgeny Zamyatin's We."[10] In 1994, We received a Prometheus Award in the Libertarian Futurist Society's "Hall of Fame" category.[11]

In addition to We, Zamyatin also wrote a number of short stories, in fairy tale form, that constituted satirical criticism of Communist ideology. In one story, the mayor of a city decides that to make everyone happy he must make everyone equal. The mayors then forces everyone, himself included, to live in a big barrack, then to shave their heads to be equal to the bald, and then to become mentally disabled to equate intelligence downward. This plot is very similar to that of The New Utopia (1891) by Jerome K. Jerome whose collected works were published three times in Russia before 1917.[12] In its turn, Kurt Vonnegut's short story "Harrison Bergeron" (1961) bears distinct resemblances to Zamyatin's tale.

Max Eastman, an American communist who had similarly broken with his former beliefs, described the Politburo's campaign against Zamyatin in his book Artists in Uniform.[13]

In 1931, Zamyatin appealed directly to Joseph Stalin, requesting permission to leave the Soviet Union. In this letter Zamyatin wrote, "I do not wish to conceal that the basic reason for my request for permission to go abroad with my wife is my hopeless position here as a writer, the death sentence that has been pronounced upon me as a writer here at home.".[14] With the encouragement of Maxim Gorky, Stalin decided to grant Zamyatin's request.

Zamyatin settled with his wife in Paris, where he collaborated with French film director Jean Renoir. Renoir's 1936 adaptation of Gorky's The Lower Depths was co-written by Zamyatin.

Yevgeny Zamyatin died in poverty of a heart attack in 1937. Only a small group of friends were present for his burial. However, one of the mourners was his Russian language publisher Marc Slonim, who had befriended the Zamyatins. Zamyatin's grave can be found in Cimetière de Thiais, south of Paris. 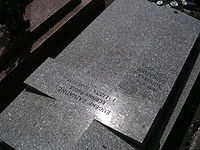 We was first published in the USSR in this collection of Zamyatin's works.