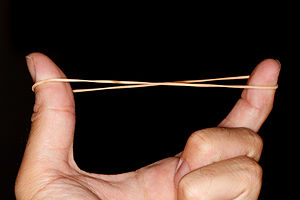 Rubber, a material with an extremely low Young's modulus

Young's modulus, which is also known as the elastic modulus, is a mechanical property of linear elastic solid materials. It defines the relationship between stress (force per unit area) and strain (proportional deformation) in a material. Young's modulus is named after the 19th-century British scientist Thomas Young. However, the concept was developed in 1727 by Leonhard Euler, and the first experiments that used the concept of Young's modulus in its current form were performed by the Italian scientist Giordano Riccati in 1782, pre-dating Young's work by 25 years.[1] The term modulus is the diminutive of the Latin term modus which means measure.

A solid body deforms when a load is applied to it. If the material is elastic, the body returns to its original shape after the load is removed. The material is linear if the ratio of load to deformation remains constant during the loading process. Not many materials are linear and elastic beyond a small amount of deformation. A constant Young's modulus applies only to linear elastic materials. A perfectly rigid material has an infinite Young's modulus because an infinite force is needed to deform such a material. A material whose Young's modulus is very high can be approximated as rigid.[2]

A stiff material needs more force to deform compared to a soft material. Therefore, the Young's modulus is a measure of the stiffness of a solid material. Do not confuse:

The technical definition is: the ratio of the stress (force per unit area) along an axis to the strain (ratio of deformation over initial length) along that axis in the range of stress in which Hooke's law holds.[3]

Young's modulus is the most common elastic modulus, sometimes called the modulus of elasticity, but there are other elastic moduli such as the bulk modulus and the shear modulus.

Young's modulus is the ratio of stress (which has units of pressure) to strain (which is dimensionless), and so Young's modulus has units of pressure. Its SI unit is therefore the pascal (Pa or N/m2 or m−1·kg·s−2). The practical units used are megapascals (MPa or N/mm2) or gigapascals (GPa or kN/mm2). In United States customary units, it is expressed as pounds (force) per square inch (psi). The abbreviation ksi refers to "kpsi", or thousands of pounds per square inch.

The Young's modulus enables the calculation of the change in the dimension of a bar made of an isotropic elastic material under tensile or compressive loads. For instance, it predicts how much a material sample extends under tension or shortens under compression. The Young's modulus directly applies to cases of uniaxial stress, that is tensile or compressive stress in one direction and no stress in the other directions. Young's modulus is also used in order to predict the deflection that will occur in a statically determinate beam when a load is applied at a point in between the beam's supports. Other elastic calculations usually require the use of one additional elastic property, such as the shear modulus, bulk modulus or Poisson's ratio. Any two of these parameters are sufficient to fully describe elasticity in an isotropic material.

Young's modulus represents the factor of proportionality in Hooke's law, which relates the stress and the strain. However, Hooke's law is only valid under the assumption of an elastic and linear response. Any real material will eventually fail and break when stretched over a very large distance or with a very large force; however all solid materials exhibit nearly Hookean behavior for small enough strains or stresses. If the range over which Hooke's law is valid is large enough compared to the typical stress that one expects to apply to the material, the material is said to be linear. Otherwise (if the typical stress one would apply is outside the linear range) the material is said to be non-linear.

Young's modulus is not always the same in all orientations of a material. Most metals and ceramics, along with many other materials, are isotropic, and their mechanical properties are the same in all orientations. However, metals and ceramics can be treated with certain impurities, and metals can be mechanically worked to make their grain structures directional. These materials then become anisotropic, and Young's modulus will change depending on the direction of the force vector. Anisotropy can be seen in many composites as well. For example, carbon fiber has much higher Young's modulus (is much stiffer) when force is loaded parallel to the fibers (along the grain). Other such materials include wood and reinforced concrete. Engineers can use this directional phenomenon to their advantage in creating structures.

Young's modulus at a given strain, E(ε), can be calculated by dividing the tensile stress by the extensional strain in the elastic (initial, linear) portion of the physical stress–strain curve:

The Young's modulus of a material can be used to calculate the force it exerts under specific strain.

where F is the force exerted by the material when contracted or stretched by ΔL.

Hooke's law can be derived from this formula, which describes the stiffness of an ideal spring:

where it comes in saturation

The elastic potential energy stored in a linear elastic material is given by the integral of the Hooke's law:

now by expliciting the intensive variables:

This means that the elastic potential energy density (i.e., per unit volume) is given by:

or, in simple notation, for a linear elastic material:

, since the strain is defined

Young's modulus can vary somewhat due to differences in sample composition and test method. The rate of deformation has the greatest impact on the data collected, especially in polymers. The values here are approximate and only meant for relative comparison.