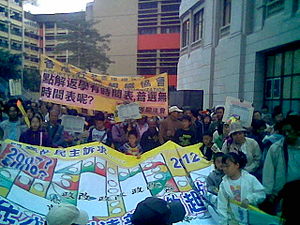 Child and youth activists protesting at a demonstration in Hong Kong.

Teens are often shut out of participation in politics because adults dominate the discourse. However, youth are also concerned and informed citizens who can advocate for change within their communities.[5] Youth is an elastic category, the age at which it begins and ends varies within cultural contexts, but it is often a very distinct stage in a person’s life to which particular issues or policies are highly relevant. These may include politics, health, and social issues.[6]

Sociopolitical development is a "psychological process that covers the range of cognitions, skills, attitudes, worldviews, and emotions that support social and political action" (Watts, Griffith, & Abdul-Adil, 1999).[7] The process of SPD was further defined by Watts & Flannagan "to impact young people’s social analysis, worldview and sense of agency and to provide them opportunity structures and support towards their societal involvement behavior (2007)." [8]

Social activism is the predominant form of youth activism today, as millions of young people around the world participate in social activism that is organized, informed, led, and assessed by adults. Many efforts, including education reform, children's rights, and government reform call on youth to participate this way, often called youth voice. Youth councils are an example of this.[9]

Youth-driven activism requires young people to be the primary movers within an adult-led movement. Such is the case with the Sierra Club, where youth compel their peers to join and become active in the environmental movement. This is also true of many organizations that were founded by youth who became adults, such as SEAC and National Youth Rights Association.[citation needed]

Political activism by youth can go unnoticed because youth activism often occurs on school grounds and away from the adult society, but youth often face resistance when forming youth activist groups in schools.[10] As the central beneficiaries of public schools, youth are also advocating for student-led school change and education reform through student activism and meaningful student involvement.[11] There are structural inequalities that keep youth from engaging in political talk and action on school grounds or the public domain. School clubs require an adult adviser to make the club official, further adding to school hierarchies of adult power.[10] While some youth participate in Student government, others prefer Student Unions because they provide a real voice to the students and present it to the administration while student governments do not have the power to effect real change in a school system.[10]

Facebook has become a tool for youth to not only gather information, but broadcast events and activities, participate in activist groups, and get in contact with other activist. Twitter, although it is used to provide links to activism, is not regarded to be as useful because of the limitation of 140 characters.[12] Twitter has also been used to spread awareness of social issues by using hashtags. Some of these movements included Kony 2012 and Trayvon Martin.[13]

Video blogging is used as a tool by youth activist to reach out to their peers, gather support, establish a discourse and even to mobilize others. Youth use videos to articulate ideas and needs, organize resources and people, and achieve the goals and causes of those people.[14] These video blogs are found through linking in social media sites such as Facebook , Twitter and, Instagram

Independent Media Center, also known as Indymedia, is a recent development that has helped involve youth into social movement activism. It has also led to the recognition of youth as political actors in the public domain.[10]

Youth activism in the Global South increased in the first years of the 2010s.[15] People under the age of 18 comprise 46% of the global population, and these youth played a crucial role around the world during the first two decades of the twenty-first century.[16]

A classic example of youth engagement in political activism is the Soweto riots. To the people in South Africa, June 16 is a constant reminder of the political events that occurred in 1976. When teachers started instructing in Afrikaans, the language of their oppressors, children took the streets for a peaceful demonstration. The police reaction was brutal and that day at least twenty-five people were killed. The violence continued and spread all across the country. By the end of the year 575 people died and 2,389 were wounded.[5]

A contemporary challenge for South African youth is the AIDS pandemic. Fifty-three percent of South Africa’s population is under the age of 25. Around 60% of adults who contracted HIV become infected before they turn twenty-five, meaning youth are particularly endangered. To advocate and protest about HIV/AIDS, South African youth known as "urban warriors" have created social movements that use youth culture, media, and peer-to-peer campaigns to advocate for HIV/AIDS.[17]

In Hong KONG, Hong Kong Federation of Students leading the social movement umbrella movement to against the decision of the Standing Committee of the National People's Congress (NPCSC) of 31 August.

In India, youth born in the 1980s and 1990s comprise part of a middle-class increasingly vocal against impunity for rapists and against government corruption.[18]

Youth activism in Indonesia takes many different forms and include a number of mass protests to overthrow governments and remove colonial powers in the past. Popular motivations of youth activism in Indonesia are: indigenous rights and national unity, pro-communism, anticommunism, pro-democracy and militant Islam. A common form of activism is massa, a cavalcade of motorcycles, trucks, music, and many young people on foot. These cavalcades are mostly males and end with a rally to address a certain political issue. In general, youth have been looking for political change during the last four decades.[17]

Video blogging has become increasing popular in Malaysia. Youth activist upload their videos and independent films to the popular site EngageMedia. EngageMedia is used by Malaysians to encourage young people to become citizen journalist. Youth view EngageMedia as a safe space for their video blogs, but there is still fear of retribution.[14]

In Nepal, Youth For Blood is working to make nation a blood scarcity free. They are supporting patient to find fresh blood, awarding people to donate blood and advocating to pressurize concern authority for quality blood transfusion services and policies.

Singapore is one of the most developed information and communication technology (ICT) countries in the world. In 2010 the computer ownership rate was 84 percent and with internet access at 78 percent. In 2009 the mobile phone penetration reached 137 percent, meaning the people of Singapore has access to more than one phone.[12]

Youth use ICT for social and political purposes. In the 2011 General Election, people between the ages of 21 and 34 were more active in online politics. Youth that wrote about elections on blogs, Facebook or Twitter was at 28 percent, while the general public was only 10 percent.[12]

Youth proved to be central to the Egyptian Revolution and the April 6 Movement.

Throughout the 1990s, youth took the streets to protest against Serbian leader, Slobodan Milošević. Youth activists were credited with contributing to Milošević's resignation. During the years of protests youth faced unemployment, a failing education system, and economic instability. This original EXIT festival lasted one hundred days and led up to elections in September 2000. They created the Exit music festival. The first year this festival was called EXIT 00 and has been defined as "creative" and "politically savvy" activism. The festival contained a civic education component and continues today.[17]

Youth activism as a social phenomenon in the United States truly became defined in the mid- to late-nineteenth century when young people began forming labor strikes in response to their working conditions, wages, and hours. Mary Harris "Mother" Jones organized the first youth activism in the U.S., marching 100,000 child miners from the coal mines of Pennsylvania to the U.S. Capitol in Washington, D.C. in 1908. Youth newspaper carriers soon followed. These actions isolated youths' interests in the popular media of the times, and separated young people from their contemporary adult labor counterparts.[citation needed] This separation continued through the 1930s, when the American Youth Congress presented a "Bill of Youth Rights" to the US Congress. Their actions were indicative of a growing student movement present throughout the US from the 1920s through the early 1940s. The 1950s saw the Student Nonviolent Coordinating Committee bring young people into larger movements for civil rights. All the way back in 1959, Rev. Dr. Martin Luther King, Jr. engaged youth activists in protesting against Bull Connor's racist law enforcement practices in Birmingham, Alabama. Youthful activism comes to full flower-power in the 1960s and 1970s. The youth activism of Tom Hayden, Keith Hefner and other 1960s youth, this laid a powerful precedent for modern youth activism. John Holt, Myles Horton and Paulo Freire were each important in this period. Youthful life and expression defined this period in American history from the late 1960s to the early 1970s. From 1964 to 1970, the college campus became the center of American life, strife, and political turmoil: strikes, demonstrations, and clashes with authorities were daily occurrences on campus in the late 1960s/early 1970s. In the 1960s, the Supreme Court Justice Abe Fortas handed out two landmark case decisions in favor of youth rights: Tinker v. Des Moines and In re Gault.