Ypatingasis būrys (Special Squad) or Special SD and German Security Police Squad (Lithuanian: Vokiečių Saugumo policijos ir SD ypatingasis būrys, Polish: Specjalny Oddział SD i Niemieckiej Policji Bezpieczeństwa, also colloquially strzelcy ponarscy ("Ponary riflemen" in Polish)[1][2] (1941–1944) was a Lithuanian killing squad of approximately 50 men, also called the "Lithuanian equivalent of Sonderkommando",[3] operating in the Vilnius Region. The unit, primarily composed of Lithuanian volunteers[4] was formed by the German occupational government[5] and was subordinate to Einsatzkommando 9 and later to Sicherheitsdienst (SD) and Sicherheitspolizei (Sipo).[6] There are different estimates regarding the size of the unit. Polish historian Czesław Michalski estimates that it grew from base of 50[7] while Tadeusz Piotrowski asserts about that there were 100 volunteers at its onset.[8] According to Michalski, after its initial creation at various times hundreds of people were its members.[7] Arūnas Bubnys states that it never exceeded a core of forty or fifty men.[9] 118 names are known, 20 of the members have been punished.[10] Together with German police the squad participated in the Ponary massacre, where some 70,000 Jews were murdered,[11] along with estimated 20,000 Poles and 8,000 Russian POWs, many from nearby Vilnius. 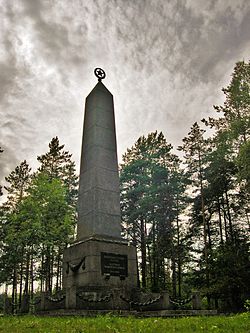 The first mention of the name of the Vilnian Special Squad, (Lithuanian: Ypatingasis būrys) is from documents dated 15 July 1941. The Special Squad (YB) began as police unit formed after Lithuania was occupied by Germany in 1941. Many were volunteers,[4] particularly recruited from the former paramilitary nationalistic[2][12] Union of Lithuanian Riflemen (Lithuanian: Lietuvos Šaulių Sąjunga) organization.[13][14] It was composed primarily of Lithuanians, although according to Lithuanian historian Bubnys, a few Russians and a few Poles served in it as well.[3][5]

The unit was subordinated to German police, and had no autonomy.[15] Amongst the original organizers of the squad were junior lieutenants Jakubka and Butkus. After 23 July 1941, the commanding officer was Juozas Šidlauskas. Squad members were issued Soviet weapons and white armbands and were used as guards and to move Jews from their apartments to the Ghetto. In November 1941, lieutenant Balys Norvaiša, became the commander of the squad and his deputy was lieutenant Balys Lukošius. The size of the squad was reduced to between forty and fifty men. By the end of 1943, Norvaiša and Lukošius were deployed to a self-defence battalion and command of the YB was transferred to sergeant Jonas Tumas. Some of the squad members were wearing uniforms of Lithuanian Army until in 1942 they were issued green SD uniforms with Swastika and skulls on caps. Squad members were also issued SD identity cards. YB was subordinate only to the German Security Police. Longest serving commander of YB was SS man Martin Weiss. Weiss used to not only command executions but to kill victims personally. In 1943 Weiss was replaced by private Fiedler.[16]

YB was created to kill people and it killed people during its entire existence. It carried out most of the murders in 1941. YB killed people in Paneriai, Nemenčinė, Naujoji Vilnia, Varėna, Jašiūnai, Eišiškės, Trakai, Semeliškės, and Švenčionys.[16]

YB also guarded the Gestapo headquarters in Vilnius, the prison on present day Gediminas Avenue, as well as the Paneriai base. When Germans closed Vilnius' monasteries in 1943, YB guarded their facilities until Germans removed the seized property.[16] In 1943 YB performed far less executions than in 1941–1942. From December 1943 Paneriai was guarded by an SS unit and by 1944, according to Lithuanian historian Bubnys, YB did not perform shootings in Paneriai.[16]

From August 1943 YB was renamed to a Squad of 11th Battalion of Latvian Legion. Old identity documents were replaced with new documents of Latvian Legion troops. Despite the formal change, YB was still serving German Security Police and SD. In July 1944 YB was moved to Kaunas and stationed at Ninth Fort. There YB guarded prison and before retreating killed 100 prisoners. Then YB was moved to Stutthof, escorted Jews to Toruń. It stayed there until April 1944, when it received orders to convoy Jews to Bydgoszcz. However members of YB fled from the approaching front and Jewish prisoners escaped. Some YB members successfully retreated to Germany, some stayed in the zone occupied by Red Army.[16]

According to the Lithuanian historian Bubnys who cited the Polish historian Helena Pasierbska, during 1941–1944, approximately 108 men were members of YB.[16] Nonetheless Bubnys notes that it is difficult to answer two questions: how many members YB had and how many people they killed. Bubnys argues that the number of 100,000 victims attributed to the organization is inflated.[16]