Yuan Tseh Lee (traditional Chinese: 李遠哲; simplified Chinese: 李远哲; pinyin: Lǐ Yuǎnzhé; Wade–Giles: Li³ Yüan³-che²; Pe̍h-ōe-jī: Lí Oán-tiat; born November 19, 1936) is a Taiwanese chemist. He was the first Taiwanese Nobel Prize laureate, who, along with the Hungarian-Canadian John C. Polanyi and American Dudley R. Herschbach won the Nobel Prize in Chemistry in 1986 "for their contributions to the dynamics of chemical elementary processes". Lee's particular Physical chemistry work was related to the use of advanced chemical kinetics techniques to investigate and manipulate the behavior of chemical reactions for relative large molecules using crossed molecular beams. From January 15, 1994 to October 19, 2006, Lee served as the President of the Academia Sinica of Taiwan. In 2011, he was elected head of the International Council for Science.

Lee was born in Shinchiku City (modern-day Hsinchu) in northern Taiwan, which was then under WWII Japanese rule to Lee Tze-fan, an accomplished Shinchiku-born artist, and Ts'ai P'ei (蔡配 Cài Péi), an elementary school teacher from Goseikō Town (梧棲港街), Taichū Prefecture (now Wuqi, Taichung). Lee played on the baseball and ping-pong teams of Hsinchu Elementary School (新竹國小), and later studied at the Hsinchu Senior High School (新竹高中), where he played tennis and trombone. Due to his achievements in high school, he entered National Taiwan University without taking the entrance examination and earned a B.Sc. in 1959. He earned an M.S. at National Tsing Hua University in 1961 and Ph.D. at the University of California, Berkeley in 1965 under the supervision of Bruce H. Mahan. He was a member of the Chemistry International Board from 1977 to 1984.

In February 1967, he started working with Dudley Herschbach at Harvard University on reactions between hydrogen atoms and diatomic alkali molecules and the construction of a universal crossed molecular beams apparatus. After the postdoctoral year with Herschbach he joined the University of Chicago faculty in 1968. In 1974, he returned to Berkeley as professor of chemistry and principal investigator at the Lawrence Berkeley National Laboratory, becoming a U.S. citizen the same year. Lee is a University Professor Emeritus of the University of California system.

Swedish chemist Svante Arrhenius studied this phenomenon during the late 1880s, and stated the relations between reactive molecular encounters and rates of reactions (formulated in terms of activation energies).

Other scientists at the time also stated a chemical reaction is fundamentally a mechanical event, involving the rearrangement of atoms and molecules during a collision. Although these initial theoretical studies were only qualitative, they heralded a new era in the field of chemical kinetics; allowing the prediction of the dynamical course of a chemical reaction.

In the 1950s, 1960s and 1970s, with the development of many sophisticated experimental techniques, it became possible to study the dynamics of elementary chemical reactions in the laboratory. Such as, the analysis of the threshold operating conditions of a chemical laser or the spectra obtained using various linear or non-linear laser spectroscopic techniques.

Professor's Lee's research focused on the possibility to control the energies of the reagents, and to understand the dependence of chemical reactivity on molecular orientation, among other studies related to the nature of reaction intermediates, decay dynamics, and identifying complex reaction mechanisms. To do so, Professor Lee used a breakthrough laboratory technique at the time, called the "crossed molecular beams technique", where the information derived from the measurements of angular and velocity distributions allowed him and his team to understand the dynamics of elementary chemical reactions.

Lee played an important role during the 2000 Presidential Election and since then has been a supporter of the Pan-green coalition which advocates Taiwan independence. In the last week of the election he announced his support for the candidacy of Chen Shui-bian who subsequently won a narrow victory over James Soong. Chen intended to nominate Lee to become Premier, but Lee declined after a few days of deliberation. Lee has been the President of the Academia Sinica since 1994 and renounced his U.S. citizenship to take the post.[1]

In January 2004, he and industrial tycoon Wang Yung-ching and theatre director Lin Hwai-min issued a joint statement asking both Chen Shui-bian and Lien Chan to "drop hatred and extreme behavior and resort to honesty." This, and other critical statements of the President, led to speculation that he would not back Chen again in the 2004 elections until he issued a statement of support for the DPP on March 17, 3 days before polls opened. He was elected President of the International Council for Science in 2008, to start his term in 2011.[2]

During the 2012 Republic of China Presidential elections, Lee expressed his support for DPP candidate Tsai Ing-Wen. In early 2016, he appeared and addressed a rally by New Power Party-a party formed by student activists involved in Sunflower Movement[3]

During his tenure, Lee has worked to create new research institutes, advance scientific research within Taiwan, and to recruit and cultivate top scholars for the Academic Sinica. However, Lee has been criticized by some for his involvement in educational reforms that they claim to have put unnecessary burden and administrative complications on the students and reduced competitiveness of higher education. Some critics also claim that Lee should stick to the sciences and stop using his Nobel pedigree to influence educational and political policies, areas with which they asserted he is not familiar.[citation needed]

In 2010, Lee said that global warming would be much more serious than scientists previously thought, and that Taiwanese people needed to cut their per-capita carbon emissions from the current 12 tons per year to just three. This would take more than a few slogans, turning off the lights for one hour, or cutting meat consumption, noting: "We will have to learn to live the simple lives of our ancestors." Without such efforts, he said, "Taiwanese will be unable to survive long into the future".[citation needed]

He has been involved with the Malta Conferences, an initiative designed to bring together Middle Eastern scientists. As part of the initiative, he offered six fellowships to work on the synchrotron in Taiwan.[4]

Lee married Bernice Wu Chin-li (吳錦麗 Wú Jǐnlì), whom he has known since elementary school. They have three children: Ted, Sidney, and Charlotte. In 2003, he was one of 22 Nobel Laureates who signed the Humanist Manifesto.[5] 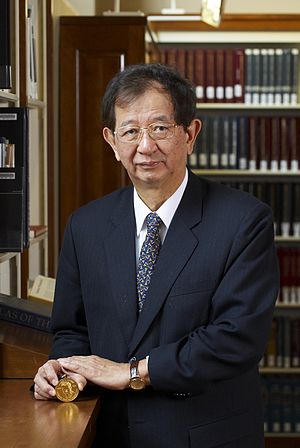 Nobel laureates of the Republic of China