Serbia national football team inherited Yugoslavia's spot within FIFA and UEFA and is considered by both organisations as the only successor of Yugoslavia.[3][4][5]

The first national team was in the kingdom that existed between the two world wars. The Football Federation of what was then the Kingdom of Serbs, Croats and Slovenes was founded in Zagreb in 1919 under the name Jugoslovenski nogometni savez (and admitted into FIFA), and the national team played its first international game at the Summer Olympics in Antwerp in 1920. The opponent was Czechoslovakia, and the historic starting eleven that represented Kingdom of SCS on its debut were: Dragutin Vrđuka, Vjekoslav Župančić, Jaroslav Šifer, Stanko Tavčar, Slavin Cindrić, Rudolf Rupec, Dragutin Vragović, Artur Dubravčić, Emil Perška, Ivan Granec, and Jovan Ružić. They lost by a huge margin 0–7, but nonetheless got their names in the history books. 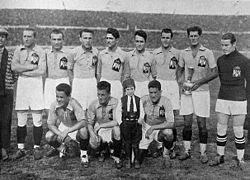 A Yugoslavia line-up in the 1930 FIFA World Cup.

In 1929, the country was renamed to Yugoslavia and the football association became Fudbalski Savez Jugoslavije and moved its headquarters to Belgrade. The national team participated at the 1930 FIFA World Cup, finishing in fourth place. In its first ever World Cup match in Montevideo's Parque Central, Yugoslavia managed a famous 2–1 win versus mighty Brazil, with the following starting eleven representing the country: Milovan Jakšić, Branislav Sekulić, Aleksandar Tirnanić, Milutin Ivković, Ivica Bek, Momčilo Đokić, Blagoje Marjanović, Milorad Arsenijević, Đorđe Vujadinović, Dragoslav Mihajlović, and Ljubiša Stefanović. The national team consisted of players based in Serbian football clubs, while the Zagreb Subassociation forbid players from Croatian clubs, some of which were regulars in the national team until then, to play in the World Cup due to the relocation of football association's headquarters from Zagreb to Belgrade.[6]

Yugoslavia begin their football campaign by defeating Luxembourg 6–1, with five different players scoring the goals. In the quarter-finals and the semi-finals, they would take out Turkey and Great Britain by the same score of 3–1. In the final though, they would lose to Sweden.

Having a team with many players from the 1948 generation, Yugoslavia was a formidable side at the 1952 Summer Olympics and finished as runner-ups behind the legendary Hungary national football team. Against the USSR, Yugoslavia was 5–1 up with 15 minutes of their first round match to go. The Yugoslavs, understandably, put their feet up. Arthur Ellis, the match referee, recorded what happened next in his book, The Final Whistle (London, 1963): "The USSR forced the most honourable draw ever recorded! [Vsevolod] Bobrov, their captain, scored a magnificent hat-trick. After the USSR had reduced the lead to 5–2, he, almost single-handed, took the score to 5–5, scoring his third in the last minute. For once, use of the word sensational was justified." Although Bobrov's early goal in their replay presaged a miraculous recovery, Yugoslavia recovered sufficiently to put out their opponents easily in the second half.

The federation and football overall was disrupted by World War II. After the war, a socialist federation was formed and the football federation reconstituted. It was one of the founding members of the UEFA and it organized the 1976 European Championship played in Belgrade and Zagreb. The national team participated in eight World Cups, four Euros, and won the Olympic football tournament in 1960 at the Summer Games (they also finished second three times and third once).

With the end of the Cold War, democratic principles were introduced to the country which brought about the end of Titoist rule. In the subsequent atmosphere, national tensions were heightened. At the Yugoslavia-Netherlands friendly in preparation for the 1990 World Cup, the Croatian crowd in Zagreb jeered the Yugoslav team and anthem and waved Dutch flags (owing to its resemblance to the Croatian tricolour). With the dissolution of Yugoslavia, the team split up and the remaining team of the Federal Republic of Yugoslavia (FRY) was banned from competing at Euro 92. The decision was made on 31 May 1992, just 10 days before the competition commenced.[7]

They had finished top of their qualifying group, but were unable to play in the competition due to United Nations Security Council Resolution 757. Their place was taken by Denmark, who went on to win the competition. Yugoslavia had also been drawn as the top seed in Group 5 of the European Zone in the qualifying tournament for the 1994 World Cup. FRY was barred from competing, rendering the group unusually weak.

Both FIFA and UEFA consider the Serbian national team to be the direct and sole successor of the Yugoslavia (Kingdom of Yugoslavia, SFR Yugoslavia and FR Yugoslavia) and Serbia and Montenegro national football teams. The teams of other republics were inducted as fully new members.

The Yugoslav under-20 team won the FIFA World Youth Championship 1987.

* Draw for 1994 FIFA World Cup qualifiers was made on 8 December 1991, however due to break-up of SFR Yugoslavia and consequent military conflict, which broke in early 1991, FSJ ceased to exist as football organization of the SFR Yugoslavia. Organization that remained based in Belgrade, Serbia, was excluded from taking part as FSJ or its successor due to UN sanctions.[10]