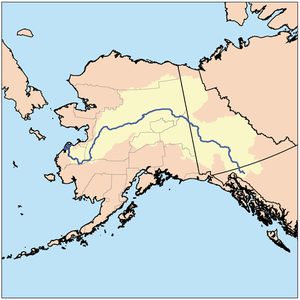 Location of the Yukon River and watershed

The longest river in Alaska and Yukon, it was one of the principal means of transportation during the 1896–1903 Klondike Gold Rush. A portion of the river in Yukon—"The Thirty Mile" section, from Lake Laberge to the Teslin River—is a national heritage river and a unit of Klondike Gold Rush International Historical Park.[4][5] Paddle-wheel riverboats continued to ply the river until the 1950s, when the Klondike Highway was completed. After the purchase of Alaska by the United States in 1867, the Alaska Commercial Company acquired the assets of the Russian-American Company and constructed several posts at various locations on the Yukon River.

The name Yukon, or ųųg han, is a blend of the words in the Gwich'in phrase chųų gąįį han, which mean white water river and which refer to the visual effect of glacial silt in the Yukon River.[6][7] The blend omits the consonant “ch” and the vowels “ąįį.”[8] In 1843, the Holikachuks had told the Russians that their name for the river was Yukkhana and that the name meant big river.[9] Although it did serve as the name, Yukkhana does not correspond to a Holikachuk phrase that means big river.[10][11] The Holikachuks had borrowed the upriver language name and conflated its meaning with the meaning of Kuigpak, the Yup’ik name for the same river.[12] Two years later, the Gwich’ins told the Hudson’s Bay Company that their name for the river was Yukon and that the name meant white water river.[6] White water river in fact corresponds to Gwich’in words that can be blended to form Yukon.[7]

The Lewes River is the former name of the upper course of the Yukon, from Marsh Lake to the confluence of the Pelly River at Fort Selkirk.

The Yukon River has had a history of pollution from gold mining, military installations, dumps, wastewater, and other sources.[citation needed] However, the Environmental Protection Agency does not list the Yukon River among its impaired watersheds, and water quality data from the U.S. Geological Survey shows relatively good levels of turbidity, metals, and dissolved oxygen.[13]

The Yukon River Inter-Tribal Watershed Council, a cooperative effort of 70 First Nations and tribes in Alaska and Canada, has the goal of making the river and its tributaries safe to drink from again by supplementing and scrutinizing Government data.

Map of the Yukon River watershed

The generally accepted source of the Yukon River is the Llewellyn Glacier at the southern end of Atlin Lake in British Columbia. Others suggest that the source is Lake Lindeman at the northern end of the Chilkoot Trail. Either way, Atlin Lake flows into Tagish Lake (via the Atlin River), as eventually does Lake Lindeman after flowing into Bennett Lake. Tagish Lake then flows into Marsh Lake (via the Tagish River). The Yukon River proper starts at the northern end of Marsh Lake, just south of Whitehorse. Some argue that the source of the Yukon River should really be Teslin Lake and the Teslin River, which has a larger flow when it reaches the Yukon at Hootalinqua. The upper end of the Yukon River was originally known as the Lewes River until it was established that it actually was the Yukon. North of Whitehorse, the Yukon River widens into Lake Laberge, made famous by Robert W. Service's "The Cremation of Sam McGee". Other large lakes that are part of the Yukon River system include Kusawa Lake (into the Takhini River) and Kluane Lake (into the Kluane and then White River).

The river passes through the communities of Whitehorse, Carmacks, (just before the Five Finger Rapids) and Dawson City in Yukon, and crossing Alaska into Eagle, Circle, Fort Yukon, Stevens Village, Rampart, Tanana, Ruby, Galena, Nulato, Grayling, Holy Cross, Russian Mission, Marshall, Pilot Station, St. Marys (which is accessible from the Yukon at Pitkas Point), and Mountain Village. After Mountain Village, the main Yukon channel frays into many channels, sprawling across the delta. There are a number of communities after the "head of passes," as the channel division is called locally: Nunum Iqua, Alakanuk, Emmonak, and Kotlik. Of those delta communities, Emmonak is the largest with roughly 760 people in the 2000 census. Emmonak's gravel airstrip is the regional hub for flights. 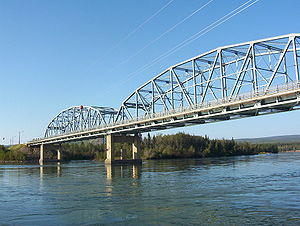 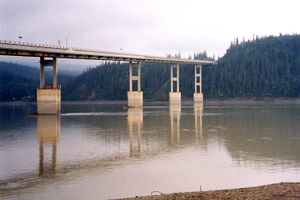 Navigational obstacles on the Yukon River are the Five Finger Rapids and Rink Rapids downstream from Carmacks.

Despite its length, there are only four vehicle-carrying bridges across the river:

A car ferry crosses the river at Dawson City in the summer; it is replaced by an ice bridge over the frozen river during the winter. Plans to build a permanent bridge were announced in March 2004, although they are currently on hold because bids came in much higher than budgeted.

There are also two pedestrian-only bridges in Whitehorse, as well as a dam across the river and a hydroelectric generating station. The construction of the dam flooded the White Horse Rapids, which gave the city its name, and created Schwatka Lake.

The river flows into several parklands and refuges including: 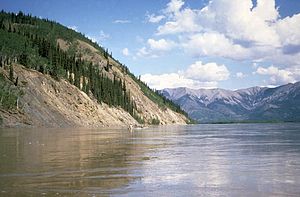 Some of the upper slopes of this watershed (e.g. Nulato Hills) are forested by Black Spruce.[14] This locale near the Seward Peninsula represents the near westernmost limit of the Black Spruce, Picea mariana,[15] one of the most widespread conifers in northern North America.

The Yukon River is home to one of the longest salmon runs in the world. Each year Chinook, coho, and chum salmon return to their terminal streams in Alaska, the Yukon Territories, and British Columbia. The Chinook have the longest journey, with an estimated 35–50% bound for Canada. As salmon do not eat during their spawning migration, Yukon River salmon must have great reserves of fat and energy to fuel their thousands-mile long journey. As a result, Yukon River salmon are noted for their especially rich and oily meat.

The villages along the Yukon have historically and continue to rely on salmon for their cultural, subsistence, and commercial needs. Salmon are traditionally dried, smoked, and frozen for both human and sled dog consumption. Common methods of fishing on the Yukon include set gillnets, drift nets, dip nets, and fish wheels. The preference of certain gear is largely dependent on the river's varied characteristics in different areas. Some parts of the river do not have eddies to make set-nets successful, whereas in other places the tributaries are small enough to make drifting impractical.

Over the last 20 years salmon recruitment, the number of returning adults, has taken several shocks. The late 1980s, 1990s, and 2000s have been marked by radically reduced runs for various salmon species. The United States Department of Commerce issued a Federal Disaster Declaration for the 2008 and 2009 Commercial Chinook Yukon River fisheries, citing the complete closure of commercial fishing along with restrictions placed on subsistence fishing. The root cause of these poor returns remains debated, with questions about the effects of climate change on ocean food-supply & disease prevalence in returning adults, the methods of fishing used on the river, and the effects of the Bering Sea Pollock trawl fleet on food supply and salmon bycatch.[16][17] In 2010, the Alaska Department of Fish & Game's Board of Fisheries issued the first-ever restriction for net mesh size on the Yukon, reducing it to 7.5 inches (190 mm).[18]

Various organizations are involved to protect healthy salmon runs into the future. The Yukon River Drainage Fisheries Association was formed in 1990 by consensus of fishers representing the entire drainage in response to recent disaster years. Its organizational goals include giving voice to the village fishers that have traditionally managed these resources, enabling communication between fishers and fishery managers, and helping to preserve the ecological integrity of salmon runs and local cultures' Traditional Ecological Knowledge [19]

In March 2001, the U.S. & Canadian governments passed the Yukon River Salmon Agreement to better manage an internationally shared resource and ensure that more Canadian-originated salmon return across the border.[20] The agreement is implemented through the Yukon River Panel, an international body of 12 members, equal-parts American and Canadian, that advises managers of Yukon River fisheries concerning restoration, conservation, and coordinated management.[21] 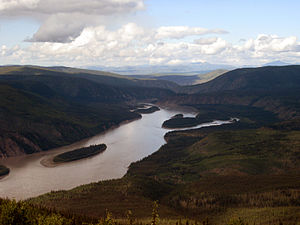 The Yukon River, as seen from the Midnight Dome in Dawson City, Yukon 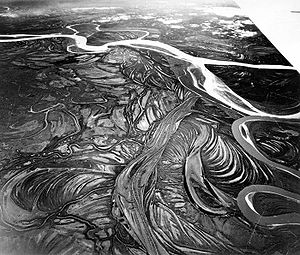 Anabranches near the junction of the Yukon River and the Koyukuk River in Alaska, August 24, 1941

The Yukon River features as the setting for the 2015 National Geographic Channel series Yukon River Run.[22]