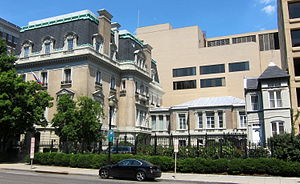 Yuli Mikhailovich Vorontsov (also Yuliy Vorontsov; Russian: Ю́лий Миха́йлович Воронцо́в) (October 7, 1929, Leningrad  – December 12, 2007, Moscow) was a Russian and Soviet diplomat, President of International Centre of the Roerichs (Moscow).[1] In the mid-1970s he was Chargé d'Affaires at the Soviet embassy in Washington under Ambassador Dobrynin.[2] He was then Ambassador to India (1978-1983) and France (1983-1986).[2] He returned to Moscow to be the first deputy foreign minister (1986-1990) and participated in arms reduction talks with the United States.[1][2] In 1988-1989, he was simultaneously the Ambassador to Afghanistan as Soviet troops withdrew from the country.[1] He then served as the last Soviet ambassador to United Nations between 1990 and 1991 and as the first Russian Permanent Representative to the UN from 1991 to 1994.[1] After this he served as the Russian ambassador to the United States from 1994 to 1998.[1][2] In 2000 Vorontsov was chosen as the high-level coordinator for issues related to a paragraph of United Nations Security Council Resolution 1284 which once again required Iraq to face "its obligations regarding the repatriation or return of all Kuwaiti and third country nationals or their remains, [and] the return of all Kuwaiti property [...] seized by Iraq" (during the invasion of Kuwait).[2][3]