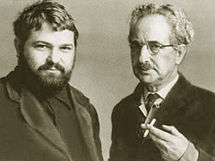 The father of Semyonov was Jewish,[1] the editor of the newspaper “Izvestia”, Semyon Alexandrovich Lyandres. In 1952 he was arrested as "an accomplice of the Bukharin counterrevolutionary conspiracy" and severely beaten during the interrogations; he became partially paralyzed as the result. His mother was Russian, Galina Nikolaevna Nozdrina, a history teacher.[citation needed]

In 1953 Semyonov graduated from Moscow Institute of Oriental Studies, the Middle-East department. Then he taught the Afghan language (Pashto) in Moscow State University and simultaneously studied there in the faculty of history.

After gaining a degree of an interpreter in the University, Semyonov had diplomatic business in East Asia countries, continuing at the same time his scientific studies in Moscow State University (specializing in Persian history and politics).

Since 1955 he started to try his hand in journalism: he was published in key Soviet newspapers and magazines of that time: “Ogoniok”, “Pravda”, “Literaturnaya Gazeta”, “Komsomolskaya Pravda”, “Smena” etc.

In the 1960s–1970s Semyonov worked abroad a lot as a reporter of the said editions (in France, Spain, Germany, Cuba, Japan, the USA, Latin America). His journalist activity was full of adventures, often dangerous ones – at one time he was in the taiga with tiger hunters, then at a polar station, and then he was at the Baikal-Amur Mainline construction and diamond pipe opening. He was constantly at the centre of the important politic events of those years – in Afghanistan, Francoist Spain, Chile, Cuba, Paraguay, tracing the Nazi, who sought cover from punishment, and Sicilian mafia leaders; taking part in the combatant operations of the Vietnamese and Laotian partisans.

Semyonov was one of the pioneers of “Investigative journalism” in the Soviet periodicals. Thus, in 1974 in Madrid he managed to interview a Nazi criminal, the favourite of Hitler Otto Skorzeny, who categorically refused to meet any journalist before. Then, being the “Literaturnaya Gazeta” newspaper correspondent in Germany, the writer succeeds in interviewing the reichsminister Albert Speer and one of the SS leaders Karl Wolff.

The conversations with such people, as well as holding the investigation regarding the searches for the Amber Room and other cultural values moved abroad from Russia during World War II were published by Semyonov in his documentary story “Face to Face” in 1983.

"Being the most precious thing one can ever possess, freedom finding is accompanied by such resistance against the essence and movement of the perestroika, that there is nothing else left to do but to stare and amaze… It seems as if the desire to be held again by the “hard hand” is brewing… Autocracy, exalting “the great, the brilliant and the outstanding” causes a catastrophe. And we know it by our own experience." 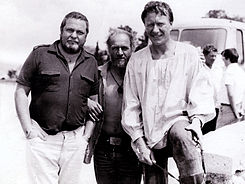 Semyonov' grave on the Novodevichy Cemetery

His wife Ekaterina Sergeevna was a step-daughter of Sergey Vladimirovich Mikhalkov (the wedding took place on 12 April 1955). Though their family life was quite complicated, Ekaterina Sergeevna devotedly kept looking after her husband after the stroke which happened to him in 1990. They had two daughters – Daria and Olga. The elder one, Daria, is an artist, and the younger, Olga Semyonova, is a journalist and a writer, an author of the autobiographical books about her father.[citation needed]

After the sudden stroke in 1990, Semyonov became bedridden and could not return to work ever again. Y.S. Semyonov died on 15 September 1993 in Moscow. He was buried in the Novodevichy Cemetery. The writer’s disease and death are still the point for expressing the versions about him being eliminated.

According to investigative journalist Vladimir Solovyov, Semyonov was actually poisoned by the KGB to prevent him from publishing the materials about Moscow Patriarch Alexius’s II and other Russian Orthodox Church officials’ collaboration with the KGB. Soloviev referred to information provided by Artyom Borovik. The material (a video tape) was allegedly prepared by priest Alexander Men, who was killed by unknown assassins at the same time. The materials were published later by Gleb Yakunin, who was given access to KGB files as a member of the Lev Ponomaryov commission.[3] 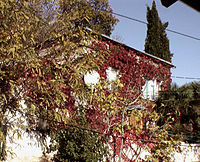 During all his life Semyonov wrote screenplays for films, mainly for the ones after his own works. The writer’s full filmography numbers more than 20 filmed works (Major Whirlwind (1967), Seventeen Instants of Spring (1973), Petrovka, 38 (1980), Tass Is Authorized to Announce… (1984), Confrontation (1985), ...), which continue to be hits of the Russian cinema.

Semyonov also directed the film Night at the 14th Parallel (1971) and acted in such films as Weekdays and Holidays (1961) and Solaris (1971, directed by Andrei Tarkovsky).