From Infogalactic: the planetary knowledge core
Jump to: navigation, search
This is a Mongolian name. The given name is Tsedenbal, and the name Yumjaagiin is a patronymic, not a family name. The subject should be referred to by the given name.

Yumjaagiin Tsedenbal (Mongolian: Юмжаагийн Цэдэнбал; September 17, 1916 – April 20, 1991) was one of the leaders of Mongolia from 1940 to 1984. During his political life, he served as prime minister and general secretary of the Mongolian People's Party.

Tsedenbal was born to an ethnic Dörvöd poor nomadic family in Zorigt Khan hoshuu of the Unen Zorigt Khan aimag (present day Davst sum in Uvs aimag). He was the fifth of eleven children in his family (three of his siblings died in infancy).

In 1925 Tsedenbal became among the first students in the newly organized public school in Ulaangom, graduating in 1929. The same year Tsedenbal went to Irkutsk to continue his education. He spent about nine years between Irkutsk and Ulan-Ude. He obtained a degree from the Siberian Finance and Economics Institute. 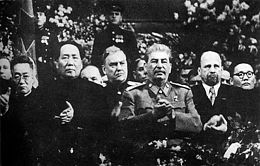 In 1939, having returned to Ulaanbaatar, Tsedenbal worked first as a deputy minister and then as a minister of finance. In 1940, at the 10th Congress of the Mongolian People's Revolutionary Party, he became the party's General Secretary at age 23.

After taking over premiership in 1952 with Marshal Khorloogiin Choibalsan's death, Tsedenbal successfully purged his political rivals: Dashiin Damba in 1958–59, Daramyn Tömör-Ochir in 1962, Luvsantserengiin Tsend in 1963, and the so-called Lookhuuz-Nyambuu-Surmaajav "anti-party group" in December 1964. He held this office until 11 June 1974, when he became head of state.

His foreign policy was marked by efforts to bring Mongolia into ever-closer cooperation with the USSR. Still, Tsedenbal and his group of party leaders (such as Tsagaan-Lamyn Dugersuren and Damdinjavyn Maidar) were dissatisfied with the economic role that the Soviet leadership assigned to Mongolia. While the USSR prodded the Mongolian government to concentrate its efforts on the development of agriculture and the mineral sector, Tsedenbal and his followers sought to foster rapid industrialization even in the face of Soviet opposition.[1] At the same time, Tsedenbal was cautious enough to frequently express his loyalty to the Kremlin and portray his intra-party critics—including Daramyn Tömör-Ochir, Tsogt-Ochiryn Loohuuz, and others—as "pro-Chinese factionalists" and "nationalists."[2]

With the full backing of the Soviets, Tsedenbal successfully purged his political opponents. It is said that during his time as head of the state, Tsedenbal submitted requests for the incorporation of Mongolia into the USSR on five to eight occasions, but these proposals were invariably rejected by the Soviet leaders. It is possible, however, that Tsedenbal's requests for incorporation were not made in earnest but served only manipulative purposes. At the time of the Sino-Soviet split, Tsedenbal decisively sided with the Soviet Union and incurred China's wrath. In Mongolia, Tsedenbal is remembered for successfully maintaining a path of relatively moderate socialism during the Cold War.[citation needed]

Tsedenbal was forced into retirement in August 1984 in a Soviet-sponsored move, officially on the account of his old age and mental weakness but at least partly because of his opposition to the process of Sino-Soviet rapprochement that had started with Leonid Brezhnev's Tashkent speech in March 1982. Jambyn Batmönkh became the general secretary of the MPRP. Tsedenbal remained in Moscow until his death; his body was brought to Mongolia, where it was buried.

His Russian wife, Anastasia Ivanovna Filatova (Анастасия Ивановна Филатова), was often said to be the most powerful political figure in Mongolia[citation needed] due to her close relationship with the Soviet leader Leonid Brezhnev.