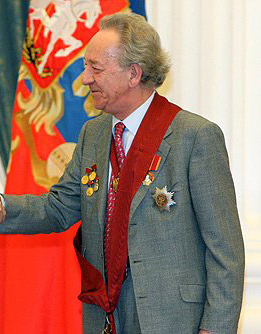 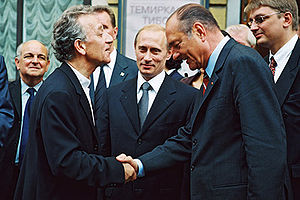 Yuri Temirkanov has been the Music Director and Chief Conductor of the Saint Petersburg Philharmonic since 1988.[2][3]

After winning the prestigious All-Soviet National Conducting Competition in 1966, Mr. Temirkanov was invited by Kirill Kondrashin to tour Europe and the United States with legendary violinist David Oistrakh and the Moscow Philharmonic Orchestra. Yuri Temirkanov made his debut with the Leningrad Philharmonic Orchestra in early 1967 and was then invited to join the Orchestra as Assistant Conductor to Yevgeny Mravinsky. In 1968, he was appointed Principal Conductor of the Leningrad Symphony Orchestra where he remained until his appointment as Music Director of the Kirov Opera and Ballet in 1976.

Maestro Temirkanov is a frequent guest conductor of the leading orchestras of Europe, Asia and the United States. He holds the distinction of being the first Soviet artist permitted to perform in the United States after cultural relations were resumed with the Soviet Union at the end of the war in Afghanistan in 1988.

In addition to leading the Saint Petersburg Philharmonic, Maestro Temirkanov served as the Baltimore Symphony Orchestra's 11th Music Director from 2000 until 2006 and is currently the Principal Guest Conductor of the Danish National Symphony Orchestra and Conductor Laureate of the Royal Philharmonic Orchestra in London.[4] In 2015 he was assigned by Teatro La Fenice the price 'A life for music', unofficially known as the 'Nobel Prize' for musicians.[5]

Temirkanov has drawn attention for saying that women are essentially weak and thus not well suited to be classical conductors.[6]