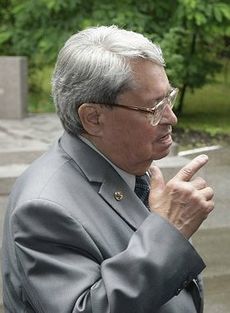 Yuri Alexeyevich Trutnev (Russian: Ю́рий Алексе́евич Тру́тнев) (born November 2, 1927, Moscow) is a Soviet/Russian physicist, member of the Russian Academy of Science, Doctor of Technical Sciences, and Hero of Socialist Labor (1962). He was a co-developer of the AN602 hydrogen bomb, the most powerful nuclear weapon ever detonated. Its October 30, 1961 test remains the most powerful artificial explosion in human history, about 50 megatons, Tsar Bomb.[1] Since the 1990s, he has been the Director of the VNIIEF Russian Nuclear Labs, located at the Nizhni-Novgorod Oblast, Sarov.