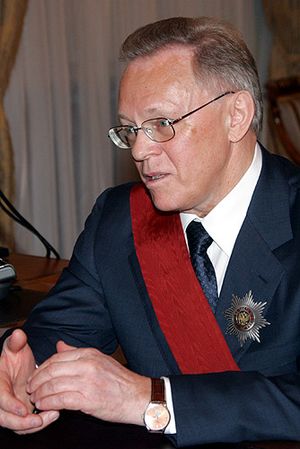 Yury Sergeyevich Osipov (Russian: Ю́рий Серге́евич О́сипов; born 7 July 1936) is a Soviet and Russian mathematician. He was elected a full member of the Academy of Sciences of the USSR in 1987 and has been president of its successor, the Russian Academy of Sciences, since 17 December 1991.

Osipov was born in Tobolsk (in present-day Tyumen Oblast, Russia). In 1959 he graduated from the Department of Mechanics and Mathematics of the Ural State University (Yekaterinburg, Russia). His teacher was Nikolai Krasovsky, famous scientist and founder of the Ural scientific school in mathematical theory of control and the theory of differential games. From 1961 to 1969 he worked at the Ural State University. From 1970 to 1993 he worked at the Institute of Mathematics and Mechanics of the Ural Branch of the USSR Academy of Sciences (later, of the Russian Academy of Sciences) in Yekaterinburg (from 1986 to 1993 he was the chief of the Institute). In 1971 he defended his second thesis and received the rank of professor in 1973. In 1984 he was elected corresponding member and in 1987, full member of the USSR Academy of Sciences (Division of Machine Engineering, Mechanics and Control Processes Problems).

Since 1993 Osipov has also served as the director of the V. A. Steklov Mathematical Institute in Moscow. He holds a concurrent appointment as a professor of the Moscow State University.