From Infogalactic: the planetary knowledge core
Jump to: navigation, search
This article is about the automobile manufacturer. For the comedy trio, see Zucker, Abrahams and Zucker. For other uses, see Zaz (disambiguation).

ZAZ or Zaporizhia Automobile Building Plant (Ukrainian: ЗАЗ, Запорізький автомобілебудівельний завод, Zaporiz'kyi avtomobilebudivnyi zavod or Zaporiz'kyi avtozavod) is the main automobile manufacturer of Ukraine, based in the south-eastern city of Zaporizhia. It also produces buses and trucks and is known for its former parent company's name, AvtoZAZ.

From A. J. Koop to Kommunar

The company that became ZAZ developed out of four business founded by German entrepreneur Abraham J. Koop to manufacture agricultural machinery.[1] The factory had been built for local Mennonite industrialist Abraham J. Koop in 1863. It produced iron parts for the windmills, reapers, threshers and plows. They were nationalized and restarted as the state-operated Kommunar factory which continued to produce twenty-four types of machines;.[2] its first combine harvesters appeared in 1929, with 129,724 built by 1952 (not counting the war years).[3] In 1930 Kommunar started to produce the first Soviet harvester Kommunar which was based on the American Holt Caterpillar horse-drawn harvester. The production of the harvester allowed the Soviet Union to cease import of harvesters from abroad.

From harvesters to cars 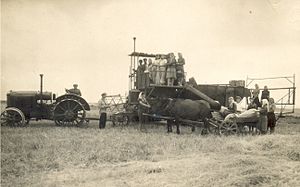 Design of a car accessible to the public, and one in part taking the place of the soon to be discontinued Moskvitch 401, began in 1956.[4] Following the growing trend of small cars (then accounting for between 25% and 40% of all European car sales), the minister in charge of Minavtroprom (the Soviet automotive ministry) selected the new Fiat 600 as the model to follow.[4] The first prototype, the MZMA 444, appeared in October 1957.[5] It was powered by a flat twin-cylinder MD-65 engine provided by the Irbitskeyeo motorcycle plant, which was "totoally unsuited": it produced only 17.5 hp (13.0 kW; 17.7 PS) and lasted only 30,000 km (19,000 mi) between major overhauls.[5] As a result, a search for another engine was begun, and the success of the VW Type 1's boxer led to a preference for an air-cooled engine, which NAMI (the National Automobile Institute) had on the drawing board.[5] Minavtroprom, however, preferred a 23 hp (17 kW; 23 PS) [6] 746 cc (45.5 cu in) V4, the NAMI-G, which had the additional advantage of being developed for the LuAZ-967.[5]

The new car was approved for production 28 November 1958,[7] the name changing to ZAZ (Zaporizhia Automobile Building Plant) to reflect the new profile.[8] The Zaporizhia factory was supplemented with the Mikoyan Diesel-Building Factory in Melitopol, which was part of the Soyuzdiesel combinat.

In 1975 the factory was consolidated in the AvtoZAZ holding, which was transformed into joint-stock company in 1990s. In 1986 ZAZ together with Comau installed a new production complex. The Illichivsk factory of automobile parts (IZAA) in one of the biggest freight sea ports on Black Sea in Illichivsk became part of the AutoZAZ holding. Newer front wheel drive cars are based on model 1102 Tavria (1989–2007) and are powered by a water cooled, front mounted MeMZ engine and fall into micro-class. On June 1, 1994 the factory ceased production of its 968M model.

When AvtoZAZ-Daewoo joint venture with Daewoo Motors was formed in 1998, ZAZ was assigned to the new company as a 50% share on behalf of AvtoZAZ. Daewoo Motors made large investments and established the production of its own models, while keeping and modernizing the native ZAZ brand. CKD kits of Daewoo Lanos started assembling the same year in Illichivsk; at the same time, CKD assembly of a number of older VAZ models started.

Following the bankruptcy of Daewoo Motors in 2001, UkrAVTO corporation bought out AvtoZAZ holding in 2002. All of the AvtoZAZ manufacturing facilities (most notably, MeMZ and Illichivsk assembling plant)[13] were reincorporated into ZAZ. The company even adopted a new logo. The Daewoo part in the joint venture was bought out by Swiss venture Hirsch & CIE in 2003.

By Decree of the President of Ukraine, CJSC "ZAZ" employees were rewarded with State awards of Ukraine in 2009.

In the first half of 2012 ZAZ manufactured 20,060 vehicles, a 30% decline from the same period in 2011.[14] In 2012 Zaporizhia Automobile Building Plant started serial full-scale production of new car model - ZAZ Vida.

ZAZ and its reputation

ZAZ's products were never held in high esteem by Soviet citizens. In fact, ZAZ's original mission was to create a "people's car", almost like Volkswagen's initial mission. In May 2009, ZAZ won the international tender for the production of vehicles for veterans and disabled people of Azerbaijan. 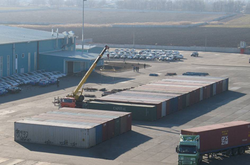 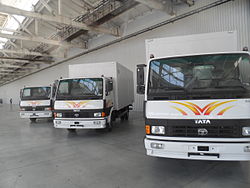 Performed at the Melitopol Motor Plant: