Zweites Deutsches Fernsehen (German pronunciation: [ˌtsvaɪ̯təs ˌdɔʏ̯tʃəs ˈfɛɐ̯nzeːən]; English: Second German Television), usually shortened to ZDF, is a German public-service television broadcaster based in Mainz, Rhineland-Palatinate. It is run as an independent nonprofit institution, which was founded by all federal states of Germany (Bundesländer). ZDF is financed by television licence fees and advertising revenues.[2] The ZDF is well known for its famous TV formats heute (newscast; established in 1963) and Wetten, dass..? (entertainment show; premiered in 1981, ended in 2014).[3] Thomas Bellut, the current director general, was elected by the ZDF Television Council in 2011.[3] 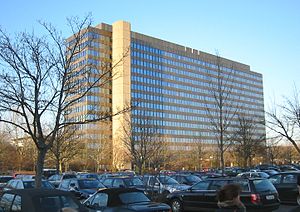 The ZDF administrative headquarters in Mainz 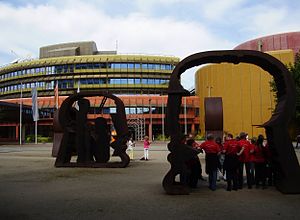 The ZDF broadcasting centre in Mainz

ZDF was founded in 1961 by interstate agreement, after the West German federal government's plan to set up a TV channel controlled by the federal government caused uproar. West Germany's constitution stipulated that regulation of culture and media was a compentency of the federal states (Bundesländer). The station began broadcasting from Eschborn near Frankfurt am Main on 1 April 1963, with a speech by the first director general (Intendant), Dr. Karl Holzamer. The channel broadcast its first programme in colour in 1967. In 1974, ZDF moved its base of operations to Mainz-Lerchenberg, after briefly being located in Wiesbaden. In 1960, the German postal service began constructing a transmitter chain for a second television network. This new network was to be broadcast on the UHF spectrum which required new reception equipment. For older receivers, a converter was sold for about 80 DM (about $20 in 1961 dollars[4] ($158 today)). As with the earlier ARD television network, the location of the transmitters was carefully planned to ensure the entire country would be able to receive the programming. To test the transmitters and encourage the public to purchase UHF receivers, the federal government allowed the ARD network to create a temporary secondary channel, ARD 2, which was broadcast daily from 8 to 10 p.m. ARD 2 began broadcasting on 1 May 1961 in the transmission area of Hessischer Rundfunk and a month later expanded nationwide.

Under the government of Konrad Adenauer, the Interior Ministry was to establish a federal TV network, the Deutschland-Fernsehen or "Germany-TV", to compete with the ARD. The SPD-led states of Hamburg, Bremen, Lower Saxony, and Hesse appealed to the Constitutional Court, which on 28 February 1961 in the First Broadcasting Judgment blocked the plan, declaring that all broadcasting powers belonged to the states. In March 1961, the states decided to establish, independently of existing institutions, a central nonprofit public television network. On 6 June 1961, the state premiers signed at a premiers' conference in Stuttgart the interstate agreement on the "establishment of the public institution Second German Television". On 1 December 1961, though not all states had ratified the agreement, it went into force in the states that had done so (Baden-Württemberg, North Rhine-Westphalia, Rhineland-Palatinate). The last state, Bavaria, filed the instrument of ratification on 9 July 1962.

Since 1 January 2009, the licences fee in Germany for radio, TV and new media has been €17.98 per month. These fees are not collected directly by ZDF, but by the Beitragsservice (formally known as Gebühreneinzugszentrale GEZ), a common organization of the ARD member broadcasters, the ZDF, and Deutschlandradio. Every resident in Germany with a radio, TV, or other relevant device (such as a computer or mobile phone with internet access) is obliged to pay this licence fee.[5]

As ZDF is a channel, not a network, the channel is broadcast throughout Germany, with no regional variations or affiliates, using a number of signal repeaters. ZDF transmitters broadcast a digital signal. Analog signals were gradually phased out, a process which lasted from 2002 to 2008.[6] ZDF does not run any transmitters itself. Throughout the analogue days, all ZDF transmitters were run by the Deutsche Bundespost which was later privatised as Deutsche Telekom's subsidiary T-Systems Media Broadcast. (This is in contrast to the other public German broadcaster, ARD, which owns its main transmitters.) ZDF was not previously allowed to use ARD's transmitters. ZDF has used both ARD and Telekom transmitters since changes to the law in the 1990s, and since the digital switchover.

ZDF has also been relayed by cable since the days of the first cable pilot projects.

The first Europe-wide satellite broadcast via Astra 1C began in August 1993 during the Internationale Funkausstellung Berlin (IFA – "International Broadcasting Exhibition") in Berlin. In the same decade, these new technologies were used to enable digital broadcasting of ZDF. Today, ZDF is available free-to-air throughout Europe on Astra 19.2°E and Hot Bird (13°E).

ZDF also operates the channels KI.KA, Arte, 3sat, and Phoenix in cooperation with other networks. Included in its digital offering, called ZDFvision are the channels ZDFneo (formerly ZDFdokukanal), ZDFinfo (formerly ZDFinfokanal), ZDFkultur (formerly ZDFtheaterkanal), all of which are transmitted in SD and HD. Today ZDF is one of Europe's largest television networks. A commercial subsidiary called ZDF Enterprises GmbH manages programme sales, acquisitions, international coproductions, and a growing number of important activities in new media.

ZDF's animated station-identity mascots, the Mainzelmännchen (a play on the words "Mainz" and "Heinzelmännchen"), created by Wolf Gerlach in 1963, quickly became popular and are still shown between commercials.[7] In 1976, Otl Aicher, a graphic designer, created ZDF's corporate design. A new design for ZDF was created by Lee Hunt in February 2000.

Administratively, ZDF is headed by a director general (Intendant), who is elected by the ZDF Television Council, the composition of which is in turn determined by "societally relevant groups" named in the ZDF Treaty.

Directors General since the start of ZDF:

The Television Board supervises ZDF and authorizes the budget. They also elect the Director General. The board has 77 members:

ZDF became a full member of the European Broadcasting Union in 1963. It also has numerous individual cooperation agreements with broadcasters around the world. ZDF is a supporter of the Hybrid Broadcast Broadband TV initiative (a consortium of broadcasting and internet industry companies including SES, OpenTV, and Institut für Rundfunktechnik) which promotes the establishment of an open European standard for hybrid set-top boxes for the reception of broadcast TV and broadband multimedia applications with a single user interface.