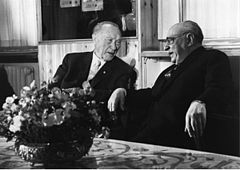 Shneur Zalman Rubashov was born to a Hasidic family of the Chabad-Lubavitch denomination in Mir, near Minsk, in the Russian Empire (today in Hrodna Voblast, Belarus), he received a religious education as a youth.

He remained involved with Chabad for the rest of his life, assisting Rabbi Yosef Yitzchok Schneersohn, the sixth Lubavitcher Rebbe in founding the village of Kfar Chabad, and at his behest, allowed the religious community in Israel to set up their own educational system.[1] He later carried on an extensive correspondence with the Lubavitcher Rebbe Menachem Mendel Schneerson, and visited him on multiple occasions.[2][3]

In his teenage years he became involved in the Poale Zion Movement. Shazar immigrated to the British Mandate of Palestine in 1924, and became a member of the secretariat of the Histadrut.

Shazar died on October 5, 1974. He is buried on Mount Herzl in Jerusalem.

Shazar served as the editor-in-chief of the Israeli newspaper Davar from 1944 to 1949.

He was elected to the first Knesset in 1949 as a member of Mapai, and was appointed Minister of Education in David Ben-Gurion's first government. He was not a member of Ben-Gurion's second cabinet, but retained his seat in the 1951 and 1955 elections. He also became a member of the Jewish Agency Executive in 1952. He resigned from the Knesset in 1956, and from 1956 to 1960 was acting chairman of the Jewish Agency's Jerusalem Executive.

Shazar was elected president by the Knesset in 1963. That same year, he attended the Funeral of John F. Kennedy after his assassination in Dallas. In 1964, when Pope Paul VI visited Israel, Shazar read to him the verse in Micah stating that though other nations might follow other gods, “we will walk in the Name of our Lord God forever”.[4] He was re-elected for a second term in 1968.

In 1969, Shazar sent one of 73 Apollo 11 Goodwill Messages to NASA for the historic first lunar landing. The message still rests on the lunar surface today. It states, "From the President of Israel in Jerusalem with hope for 'abundance of peace so long as the Moon endureth' (Psalms 72,7)."[5] In 1973 he was succeeded by Ephraim Katzir. 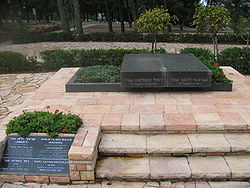 Graves of Zalman Shazar and his wife, Mt Herzl, Jerusalem 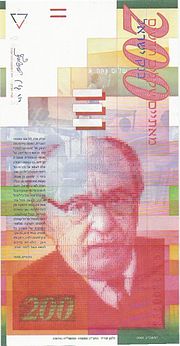 Shazar, on the 200 shekel bill