Zaporizhzhia Oblast (Ukrainian: Запорізька область, translit. Zaporiz'ka oblast’; also referred to as Zaporizhzhya – Ukrainian: Запоріжжя, Russian: Запорожская область) is an oblast (province) of southern Ukraine. Its capital is Zaporizhzhia. The oblast covers an area of 27,183 sq.kms, and its population was 1,785,243 (2013 est.)[3] at a January 2013.

This oblast is an important part of Ukraine's industry and agriculture.

The Zaporizhzhia Oblast was created as part of the Ukrainian Soviet Socialist Republic on 10 January 1939 out of the Dnipropetrovsk Oblast. During the 1991 referendum, 90.66% of votes in the oblast were in favor of the Declaration of Independence of Ukraine. The SBU thwarted an attempt to blow up a railway line in the Zaporizhzhia Oblast, and found that the suspects were carrying maps and explosives on 8 July 2014.[citation needed] A survey conducted in December 2014 by the Kyiv International Institute of Sociology found 2.1% of the oblast's population supported their region joining Russia, 80.7% did not support the idea, and the rest were undecided or did not respond.[4]

The Zaporizhzhia Oblast is administratively subdivided into 20 raions (districts) as well as 5 cities (municipalities) which are directly subordinate to the oblast government: Berdiansk, Enerhodar, Melitopol, Tokmak, and the administrative center of the oblast, Zaporizhzhia. 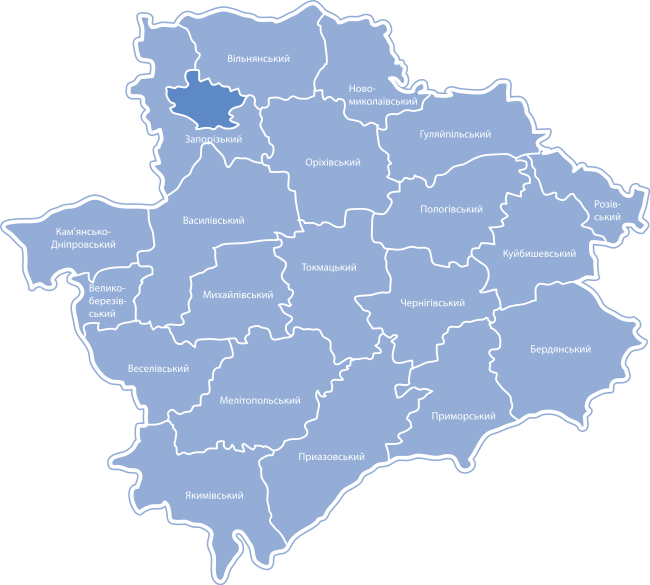 325 secondary schools, five classical schools, a Collegium and three complex-schools use the Ukrainian language. Nevertheless, the minorities have a free choice — 193 schools are Russian, a large Jewish school «Alef» works in Zaporizhzhia and smaller ones exist in other points, a Ukrainian-Bulgarian Lyceum is in Primorsky district. The Greek, Czech, Bulgarian languages are very popular in Yakimivsky, Berdyansky, Priazovsky and Melitopole rural districts. One may learn Hebrew, Yiddish, German, Polish, Tatar and other languages attending option courses anywhere.

Specialists keep on looking for an adaptive school model. 26 institutions develop the humanization process using new teaching technologies. The Khortitsky multi-profile teaching-rehabilitation centre has worked out methods for complete support of sanatorium-boarding-schools' children. Berdyansk is the town where a Regional boarding school for orphans works out active socialization programs.

42 institutions provide vocational education. This system distribute well-trained workers to regional industry and business. The list of specialities includes over 100 names. Vocational schools give courses for improving qualification in cooperation with unemployment centres. More than 1500 jobless persons get new professions every year due it.

The higher education system is the most flexible and advanced. Today 25 state-controlled technical colleges have I-II class rank and 8 higher institutions have III-IV class certificates. These are University and the Technical University, the Medical University, the Engineering Academy and the Institute of Law with Ministry of Internal Affairs in Zaporizhzhia City, the Pedagogical University, the Agricultural Academy in Melitopole and the Pedagogical Institute in Berdyansk. There are also five higher education private bodies — the Institute of Economics and Information Technologies, the State and Municipal Government Institute and the others. Over 65000 people are the students in this region. There are 212 Doctors of Science and 1420 Candidates of Science among their lecturers. Zaporizhzhia City is one of the biggest centres for foreigners' education in Ukraine.

The International Astronomical Union named two minor planets «Khadzhinov» and «Vikchemov» in honour of our countrymen who made a significant contribution in science and education.