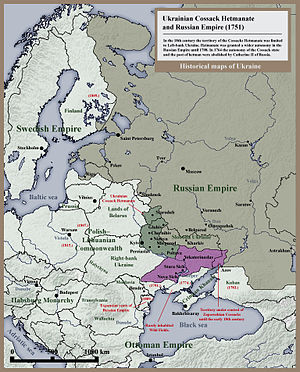 Historical map of the Ukrainian Cossack Hetmanate and of the territory of the Zaporozhian Cossacks under rule of the Russian Empire (1751).

The Zaporozhian Sich (Polish: Sicz Zaporoska; Russian: Запорожская Сечь; Ukrainian: Запорозька Січ, Zaporoz'ka Sich) was a semi-autonomous Cossacks' polity in the 16th-18th centuries, centred in the region around today's Kakhovka Reservoir spanning across the lower Dnieper river. In different periods, the area was under the sovereignty of the Polish-Lithuanian Commonwealth, the Ottoman Empire, the Tsardom of Russia, and the Russian Empire. In 1775, shortly after Russia annexed the territories ceded to it by the Ottoman Empire under the Treaty of Küçük Kaynarca (1774), the Sich was disbanded and incorporated into the Russian province of Novorossiya.

Zaporozhian Sich is said to have started from a fortress built on the Khortytsia island in the middle of the Dnieper River in the present-day Zaporozhia region of what is now Ukraine. The term "Zaporozhian Sich" can also refer metonymically and informally to the whole military-administrative organisation of the Zaporozhian Cossack Host.

The history of Zaporozhian Sich comprises six periods of time:

The term "sich" is a noun related to the Russian verb sech′ (сѣчь) – "to chop" or "cut"; it may have been associated with the usual wood sharp-spiked stockades around Cossack settlements.[citation needed]

Prince Dmitri Vishnevetski established the first Zaporizhian Sich on the island of Small (Mala) Khortytsia in 1552,[1] building a fortress at Niz Dnieprovsky (Lower Dnieper) and placing a Cossack garrison there. In 1558, however, Tatar forces destroyed that fortress. Soon another sich was created on the now-flooded island of Tomakovka as a fortified encampment 40 miles south, near the modern city of Marhanets. Tatars also razed that sich (1593). With the destruction of Tomakovska Sich, the third Sich was created on the Bazavluk island in 1593 that today is flooded as well. It survived until 1638, when a Polish expeditionary force destroyed it while suppressing a Cossack uprising. Another sich, first mentioned in 1628, stood at Nikitin Rog, near the present-day city of Nikopol. From here Bohdan Khmelnytsky's uprising began in 1648. Chertomlykska Sich was liquidated after the Battle of Poltava (1709). Then another sich was built at the mouth of the Kamianets river, which also was destroyed by Russian Empire government in 1711. The Cossacks then fled to the Crimean Khanate to avoid persecution and founded the Oleshky Sich in 1711 (today it is the city of Tsuryupinsk). In 1734, however, they were allowed to return to the Russian Empire. Being discriminated in the Khanate, Cossacks gladly accepted the offer to return and build another Sich in close proximity to the former Chortomlyk Sich. This was the last Sich which was banned in 1775 by the Government of Catherine the Great. It was the end of the war between the Russian and Ottoman Empires, for possession of the steppes near the Black Sea and Crimea. Russia's government needed no more service from the Zaporozhian Cossacks for protection of the borders in that area.

A minority of the Cossacks (about 5 thousand) left Zaporozhia to serve the Ottoman Empire at the mouth of the Danube River, where they founded Danube Sich.

In 1780, after disbanding the Zaporozhian Cossack Host, General Grigorii Potemkin made an attempt to gather and reorganize the Cossacks on a voluntary basis to help defend Ukraine from the Turks and what was to be war with the Turks (1787 - 1791). He was able to gather almost 12,000 Cossacks and called them the Black Sea Cossacks. After the conflict was over, rather than allow the Cossacks to settle across Southern Ukraine, the Russian government began to resettle them on the Kuban. In 1860, they changed their name to the Kuban Cossacks.

Zaporozhian Siches and their leaders 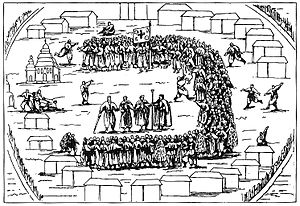 The Zaporozhian Host was led by the Sich Rada that elected a Kosh Otaman as the host's leader. He was aided by a head secretary (pysar), head judge, and head archivist. During the military operations the Ottoman carried an unlimited power supported by his staff as the military collegiate. He decided with an agreement from the Rada whether or not to support a certain Hetman (such as Bohdan Khmelnytsky) or other leaders of state.

Some sources refer to the Zaporozhian Sich as a "Cossack republic",[2] because the highest power in it belonged to the assembly of all its members, and its leaders (starshyna) were elected. The Cossacks formed a society (hromada) that consisted of "kurins" (each with several hundred cossacks). A Cossack military court severely punished violence and stealing among compatriots, the bringing of women to the Sich, the consumption of alcohol in periods of conflict, and other offenses. The administration of the Sich provided Orthodox churches and schools for the religious and secular education of children.

The population of Sich had a cosmopolitan component, as apart from Ukrainians it included Moldavians, Tatars, Poles, Lithuanians, Jews, Russians and many other ethnicities. The social structure was also complex, consisting of destitute gentry and boyars, szlachta (Polish nobility), merchants, peasants, outlaws of every sort, runaway slaves from Turkish galleys, and runaway serfs (as the Zaporozhian polkovnyk Pivtorakozhukha). Some of those who were not accepted to the host formed gangs of their own, and also claimed to be Cossacks. However, after the Khmelnytsky Uprising these formations largely disappeared and were integrated mainly into Hetmanate society. 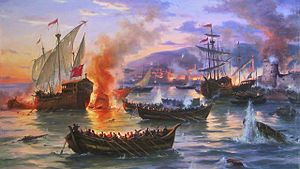 Zaporozhian Cossacks sacked Crimean Kaffa and freed the slaves in 1616.

The Cossacks developed a large fleet of fast light vessels. Their campaigns were targeted at rich settlements on the Black Sea shores of the Ottoman Empire, and several times took them as far as Constantinople[3] and Trabzon (formerly Trebizond). 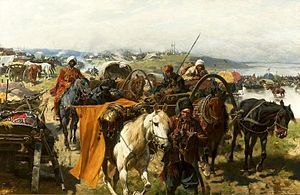 Zaporozhian Sich emerged as a natural method of defence by the Slavic people against the frequent and devastating raids of Crimean Tatars, who captured hundreds of thousands of Ukrainians, Belorusians and Poles. Such slaving operations were called "the harvesting of the steppe".

Because of the Tatars' constant interference, the Ukrainians found it hard to survive, let alone make a living. They created a self-defence force, the Cossacks, fierce enough to stop the Tatar hordes.

Some researchers say that the constant threat from the Crimean Tatars was the impetus for the emergence of Cossackdom. During raids of retribution to the Black Sea shores of the Ottoman Empire and Crimean Khanate, the Cossacks not only robbed rich settlements, but liberated their compatriots from slavery. 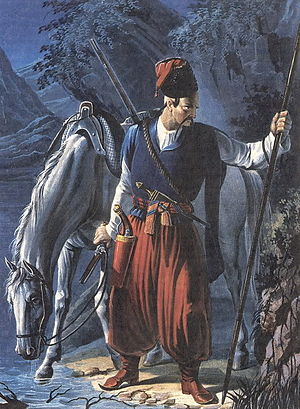 In later years Sich became the centre of Cossack life at the southern boundaries of the Tsardom of Russia. The Zaporozhian Host was governed by the Sich Rada alongside its Kosh Ataman (sometimes called Hetman, from German "Hauptmann").

After the Treaty of Pereyaslav in 1654, the Host was split into two, the Hetmanate with its capital at Chyhyryn, and the more autonomous region of Zaporozhie which continued to be centred at the Sich. During this period the Sich changed location several times.

The 1667 Truce of Andrusovo made the Sich a condominium ruled jointly by Russia and the Polish-Lithuanian Commonwealth.

During the reign of Peter the Great, Cossacks were used for the construction of canals and fortification lines in northern Russia. An estimated 20–30 thousands were sent each year. Hard labour led to a high mortality rate among builders. Only an estimated 40% of Cossacks returned home.[4]

After the Battle of Poltava the original Sich was destroyed in 1709, and Mazepa's capital, Baturyn, was razed. This is sometimes referred to as the Old Sich (Stara Sich). From 1734 to 1775 a New Sich (Nova Sich) was constructed.

Fear of the independence of the Sich resulted in the Russian Administration first abolishing the Cossack Hetmanate in 1764, and finally totally destroying Zaporozhian Sich itself through military force in 1775.

By the late 18th century, the Cossack officer class in Little Russia was incorporated into the Imperial Russian nobility (Dvoryanstvo). The rank and file Cossacks, however, including a substantial portion of the old Zaporozhians, were reduced to peasant status. They were able to maintain some freedoms and continued to provide refuge for those fleeing serfdom in Russia and Poland. This aroused the anger of the Russian Empress Catherine II. Also, tension rose after the Treaty of Küçük Kaynarca, when the need for a southern frontier ended after the annexation of the Crimea. With the colonisation of Novorossiya (New Russia), tensions were created between the Cossacks and numerous Slav colonists. European female travellers were used to penetrate Sich and to report that men went naked there. Using that as the excuse, Catherine II decided to disband the Sich.[citation needed]

In May 1775, Russian General Peter Tekeli received orders to occupy the main Zaporozhian fortress, the Sich, and to destroy it. The order was given by Grigory Potemkin, who was formally admitted into Cossackdom a few years earlier. Potemkin was given direct orders from Empress Catherine.

On 5 June 1775, Tekeli surrounded the Sich with artillery and infantry. He postponed the assault and even allowed visits while the head of the Host, Petro Kalnyshevsky, was deciding how to react to the Russian ultimatum. The Zaporozhians decided not to spill Russian blood and to surrender, not to the Empire but to Catherine the Second as a woman and the mother of the state who, according to an ultimatum, had only wanted to have these ferocious bachelors transfer to family life.[citation needed]

Sich was officially disbanded by the 3 August 1775 manifesto of Catherine the Great "On the Liquidation of Zaporizhian Sich and Annexation thereof to Novorossiya Governorate".

Sich was razed to the ground. Starshina became hereditary Russian nobility and obtained huge lands in spite of their previous attempts to relocate Sich to either North America or Australia.

Under the guidance of the starshina Lyakh, a conspiracy was formed among a group of 50 Cossacks to pretend to go fishing in the river Inhul next to the Southern Buh in the Ottoman provinces and to have 50 passports for this, which Zaporozhian Cossack Grigory Potyomkin issued for them. The pretext was enough to allow the Russians and Cossacks, defected from Turkey to become Russian border guards, to let about 5000 Zaporozhians to Turkey, because there were no photos in passports in those time. The fleeing Cossacks travelled to the Danube Delta where they formed a new Danube Sich, as a protectorate of the Ottoman Empire. Some of them moved to Hungary to have a Sich there as a protectorate of Austrian Empire. According to folklore, some moved to Malta, because Kosh members considered themselves the kind of Maltese chivalry.[5]

As long as Potyomkin could not be guilty, so Petro Kalnyshevsky was arrested and exiled to the Solovetsky Islands (where he lived to the age of 112 in the Solovetsky Monastery). Four high level starshynas had been repressed and exiled. These Kalnysh's comrades died in Siberian monasteries. Lower level starshynas who remained and went over to the Russian side were given army ranks and all the privileges that accompanied them, and allowed to join Hussar and Dragoon regiments. Most of the ordinary Cossacks were made peasants and even serfs.[6]

Though when the Host of Loyal Zaporozhians had been formed, they had Siches on Bug and Dniester, but the Ukrainian writer Adrian Kaschenko (1858–1921)[7] and historian Olena Apanovich[8] note that the final abolition of the Zaporizhian Sich of 1734-1775, the historic Cossack stronghold perceived as the bastion of the protection of the Ukrainians and their ways of life, had such a strong symbolic effect that the memories of the event remained for a long time in local folklore, and new Siches on the Bug and the Dniester, such as Sich in Austria, were not reflected in folklore. 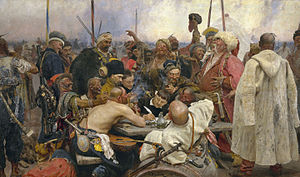