The zebra mussel (Dreissena polymorpha) is a small freshwater mussel. This species was originally native to the lakes of southern Russia,[2] being first described in 1769 by the German zoologist Peter Simon Pallas in the Ural, Volga, and Dnieper rivers. These mussels are still found nearby, as Pontic (Black Sea) and Caspian species.[3] However, the zebra mussel has been accidentally introduced to numerous other areas, and has become an invasive species in many different countries worldwide.

Zebra mussels get their name from a striped pattern commonly seen on their shells, though it is not universally present. They are usually about the size of a fingernail, but can grow to a maximum length of nearly 2 in (5.1 cm).[4][5] Shells are D-shaped, and attached to the substrate with strong byssal threads, which come out of their umbo on the dorsal (hinged) side.

Three color varieties of the shell of the zebra mussel 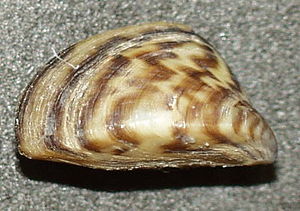 Close-up of a typical shell of a zebra mussel

Zebra mussels and the closely related and ecologically similar quagga mussels are filter-feeding organisms. They remove particles from the water column. The zebra mussels process up to one liter of water per day, per mussel.[6] Some particles are consumed as food, and feces are deposited on the lake floor. Nonfood particles are combined with mucus and other matter and deposited on lake floors as pseudofeces. Since the zebra mussel has become established in Lake Erie, water clarity has increased from 6 inches to up to three feet in some areas.[7] This improved water clarity allows sunlight to penetrate deeper, enabling growth of submerged macrophytes. These plants, when decaying, wash up on shorelines, fouling beaches and causing water quality problems.[8]

Lake floor food supplies are enriched by zebra mussels as they filter pollution out of the water. This biomass becomes available to bottom-feeding species and to the fish that feed on them.[9] The catch of yellow perch increased 5 fold after the introduction of zebra mussels into Lake St. Clair.[10]

Zebra mussels attach to most substrates including sand, silt, and harder substrates, but usually, juvenile mussels prefer harder, rockier substrates to which to attach. Other mussel species frequently represent the most stable objects in silty substrates, and zebra mussels attach to, and often kill these mussels. They build colonies on Native American unionid clams, reducing their ability to move, feed, and breed, eventually leading to their deaths. This has led to the near extinction of the unionid clams in Lake St. Clair and the western basin of Lake Erie.[7] This pattern is being repeated in Ireland, where zebra mussels have eliminated the two freshwater mussels from several waterways, including some lakes along the River Shannon in 1997.

In 2012, the National University of Ireland, Galway, said "The discovery of zebra mussels (Dreissena polymorpha) in Lough Derg and the lower Shannon region in 1997 (McCarthy et al 1997, a & b) has led to considerable concern about the potential ecological and economic damage that this highly invasive aquatic nuisance species can cause."[11]

The lifespan of a zebra mussel is four to five years.[6] A female zebra mussel begins to reproduce within 6–7 weeks of settling.[12]

An adult female zebra mussel can produce 30,000 to 40,000 eggs in each reproductive cycle, and over 1 million each year.[13] Free-swimming microscopic larvae, called veligers, drift in the water for several weeks and then settle onto any hard surface they can find. Zebra mussels also can tolerate a wide range of environmental conditions and adults can even survive out of water for about 7 days. 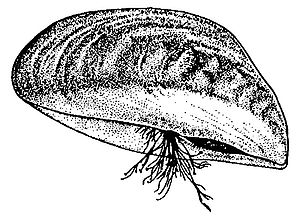 Research on natural enemies, both in Europe and North America, has focused on predators, particularly birds (36 species) and fish (15 and 38 species eating veligers and attached mussels) .

The vast majority of the organisms that are natural enemies in Europe are not present in North America. Ecologically similar species do exist, but these species are unlikely to be able to eliminate those mussels already established and will have a limited role in their control. [14]

On June 4, 2014, Canadian conservation authorities announced that a test using liquid fertilizer to kill invasive zebra mussels was successful. This test was conducted in a lakefront harbour in the western province of Manitoba.[16][17]

As an invasive species 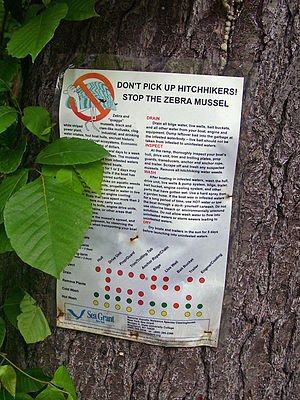 The native distribution of the species is in the Black Sea and Caspian Sea in Eurasia. Zebra mussels have become an invasive species in North America, Great Britain, Ireland, Italy, Spain, and Sweden. They disrupt the ecosystems by monotypic colonization, and damage harbors and waterways, ships and boats, and water treatment and power plants. Water treatment plants are most affected because the water intakes bring the microscopic free-swimming larvae directly into the facilities. Zebra mussels also cling to pipes under the water and clog them.

Grossinger reported it in Hungary in 1794. Kerney and Morton described the rapid colonization of Britain by the zebra mussel, first in Cambridgeshire in the 1820s, London in 1824, and in the Union Canal near Edinburgh in 1834.[15] In 1827, zebra mussels were seen in the Netherlands at Rotterdam. Canals that artificially link many European waterways facilitated their early dispersal. It is nonindigenous in the Czech Republic in Elbe River in Bohemia since 1893;[18] in southern Moravia, it is probably native.[19] Around 1920 the mussels reached Lake Mälaren in Sweden.

The first appearance of the organism in northern Italy was in Lake Garda in 1973;[20] in central Italy, they appeared in Tuscany in 2003.[21]

Zebra mussels are also present in British waterways. Many water companies are reporting having problems with their water treatment plants with the mussels attaching themselves to pipeworks. Anglian Water has estimated that it costs £500,000 per year to remove the mussels from their treatment plants.[22] It has been argued that zebra mussels also have had an effect on fish populations, with dwindling fish populations in areas such as Salford Quays.[23]

They were first detected in Canada in the Great Lakes in 1988, in Lake St. Clair, located east/northeast of Detroit and Windsor.[24] It is believed they were inadvertently introduced into the lakes in the ballast water of ocean-going ships traversing the St. Lawrence Seaway. Another possible, often neglected, mode of introduction is on anchors and chains, although this has not been proven. Since adult zebra mussels can survive out of water for several days or weeks if the temperature is low and humidity is high, chain lockers provide temporary refuge for clusters of adult mussels that could easily be released when transoceanic ships drop anchor in freshwater ports. They have become an invasive species in North America, and as such they are the target of federal policy to control them, for instance in the National Invasive Species Act (1996).

Using models based on the genetic algorithm for rule-set production, researchers have predicted that the southeastern United States is moderately to highly likely to be inhabited by zebra mussels. However, the Midwest is otherwise unlikely to experience a zebra mussel invasion of water bodies.[25]

Congressional researchers have estimated that the zebra mussel has cost businesses and communities over $5 billion since their initial invasion.[26] Zebra mussels have cost power companies alone over $3 billion.[26] 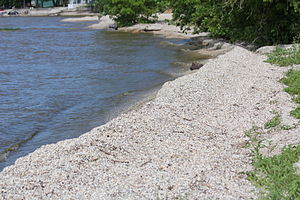 From their first appearance in American waters in 1988, zebra mussels have spread to a large number of waterways, including Lake Simcoe in the Great Lakes region and the Mississippi, Hudson, St. Lawrence, Ohio, Cumberland, Missouri, Tennessee, Huron, Colorado, and Arkansas Rivers. Today, the invasion continues. For instance, in 2009, the Massachusetts Department of Conservation and Recreation confirmed that zebra mussels had been found in Laurel Lake in the Berkshires.[27] That same year the Minnesota Department of Natural Resources announced that live zebra mussels have been found in Pelican Lake, Minnesota. This was the first confirmed sighting in the Red River Basin, which extends across the international border into the province of Manitoba.[28] In 2013, their presence in Manitoba's Lake Winnipeg was confirmed and aggressive efforts to eradicate them in 2014 have not succeeded. New contamination was found outside treated areas of Lake Winnipeg in 2015 and they have also been found in the Red River near the lake in Selkirk Park in 2015.[29] In July 2010, the North Dakota Game and Fish Department confirmed the presence of zebra mussel veliger in the Red River between Wahpeton, ND, and Breckenridge, MN.[30] As recently as 2010 California similarly reported invasions.[31] In 2011, an invasion of zebra mussels shut down a water pipeline in the Dallas area. This resulted in reduced water supplies during a drought year, worsening water restrictions across the Dallas area.[32]

A common inference made by scientists predicts that the zebra mussel will continue spreading passively, by ship and by pleasure craft, to more rivers in North America. Trailered boat traffic is the most likely vector for invasion into Western North America. This spread is preventable if boaters thoroughly clean and dry their boats and associated equipment before transporting them to new bodies of water. Since no North American predator or combination of predators has been shown to significantly reduce zebra mussel numbers,[citation needed] such spread would most likely result in permanent establishment of zebra mussels in many North American waterways.

A major decrease in the concentration of dissolved oxygen was observed in the Seneca River in central New York in the summer of 1993. This decrease was due to extremely high concentrations of zebra mussels in the watershed. Additionally, the Seneca River had significantly less chlorophyll in the water, which is used as a measure of phytoplankton biomass, due to the presence of zebra mussels.[33]

The cost of fighting the pests at power plants and other water-consuming facilities is substantial, but the exact magnitude of the damage is a matter of some controversy. According to the Center for Invasive Species Research at the University of California, Riverside,[24] the cost of management of zebra mussel in the Great Lakes alone exceeds $500 million a year. A more conservative study estimated total economic costs of $267 million for electric-generation and water-treatment facilities in the entire United States from 1989 through 2004.[34] 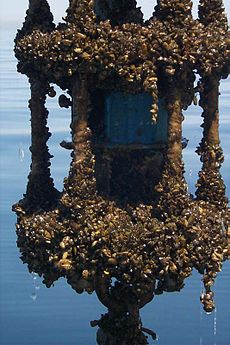 Zebra mussels are filter feeders. When in the water, they open their shells to admit detritus. As their shells are very sharp, they are known for cutting people's feet, resulting in the need to wear water shoes wherever they are prevalent.

Since their colonization of the Great Lakes, they have covered the undersides of docks, boats, and anchors. They have also spread into streams and rivers throughout the US. In some areas they completely cover the substrate, sometimes covering other freshwater mussels. They can grow so densely that they block pipelines, clogging water intakes of municipal water supplies and hydroelectric companies. Zebra mussels do not attach to cupronickel alloys, which can be used to coat intake and discharge grates, navigational buoys, boats, and motors where the species tends to congregate.[24]

Zebra mussels are believed to be the source of deadly avian botulism poisoning that has killed tens of thousands of birds in the Great Lakes since the late 1990s.[35] Because they are so efficient at filtering water, they tend to accumulate pollutants and toxins. Although they are edible, for this reason most experts recommend against consuming zebra mussels.[36]

They are also responsible for the near extinction of many species in the Great Lake system by outcompeting native species for food and by growing on top of and suffocating the native clams and mussels.[37]

Zebra mussels also affect all classes of algae species, resulting in a shortage of food sources to native species of freshwater mussels and fish in the Great Lakes.[38] 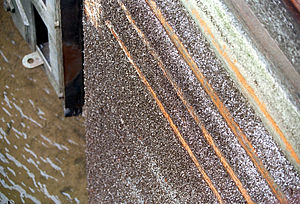 Zebra mussel infestation on the walls of Arthur V. Ormond Lock on the Arkansas River

However, zebra mussels and other non-native species are credited with the increased population and size of smallmouth bass in Lake Erie[39] and yellow perch in Lake St. Clair.[40] They cleanse the waters of inland lakes, resulting in increased sunlight penetration and growth of native algae at greater depths. This cleansing also increases water visibility and filters out pollutants. Each quagga and zebra mussel filters about 1 US quart (0.95 L) of water a day when confined to small tanks.[41] In lakes, their filtering effects are usually spatially restricted (near the lake bottom) due to nonhomogeneous water column mixing.