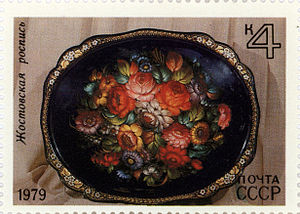 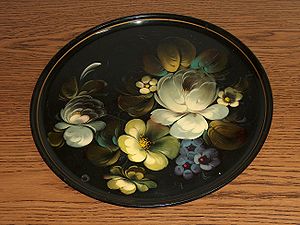 Zhostovo painting (Жостовская роспись in Russian) is an old Russian folk handicraft of painting on metal trays, which still exists in a village of Zhostovo in the Moscow Oblast. It appeared in the early 19th century mainly under the influence of the Ural handicraft of flower painting on metal. Subsequent development of the Zhostovo painting handicraft was stylistically related to porcelain and enamel painting techniques, used by factories near Moscow, flower motifs on printed cotton, produced by the Ivanovo factories, and Lukutin miniature (see Fedoskino miniature).

Zhostovo painting is a handicraft of painting on metal trays, preliminary coated with a few layers of priming (putty) and oil varnish (usually, black). Painting is done in a few consecutive energetic and firm strokes with a soft brush and oil paints, richly diluted with linseed oil. The most widely used motif of the Zhostovo painting is a bunch of mixed garden and wild flowers, which is simple and laconic in its essence. The edges of a tray are painted with a light golden ornament called уборка (uborka). A finished tray is then covered with three layers of light lacquer and polished to brilliance.

In the late 19th – early 20th century, the Zhostovo painting handicraft fell into decline. During the Soviet times, it was brought back to life after a number of artels had united themselves into one called Металлоподнос (Metal Tray) in 1928. Today, it is called the Zhostovo Factory of Decorative Painting (Жостовская фабрика декоративной росписи).