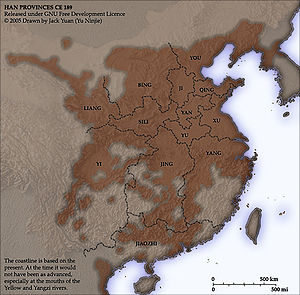 Zhou (州) were historical political divisions of China. Formally established during the Han Dynasty, zhou continued to exist until the establishment of the Republic of China—a period of over 2000 years. Zhou were also previously used in Korea (Korean: 주, ju), Vietnam (Vietnamese: châu), and Japan (Hepburn: shū).

Zhou is typically rendered by several terms in the English language: 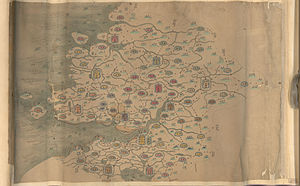 The Tang Dynasty also established fǔ (府, "prefectures"), zhou of special importance such as capitals and other major cities.[citation needed] By the Ming and Qing, fǔ became predominant divisions within Chinese provinces. The word fǔ (府) was typically attached to the name of each prefecture's capital city, thus both Chinese and Western maps and geographical works would often call the respective cities Hangzhou-fu, Wenzhou-fu, Wuchang-fu, etc.

Following the Meiji Restoration, fu was also used in Japanese for the urban prefectures of the most important cities; today, it is still used in the Japanese names for the Osaka and Kyoto Prefectures.

In modern China, zhou today exists only in the designation "autonomous prefecture" (自治州, zìzhìzhōu), administrative areas for China's designated minorities. However, zhou have left a huge mark on the place names of China, including the province of Guizhou and the major cities of Guangzhou, Fuzhou, Hangzhou, Lanzhou, and Suzhou, among many others. Likewise, although modern Korean, Vietnamese, and Japanese provinces are no longer designated by zhou cognates, the older terms survive in various place names, notably the Japanese islands of Honshu and Kyushu, the Korean province Jeju-do, and Lai Châu in Vietnam.

Further information: History of the political divisions of China

Zhou were first mentioned in ancient Chinese texts, notably the Yu Gong or Tribute of Yu, section of the Book of Documents. All agreed on the division of China into nine zhou, though they differed on their names and position. These zhou were geographical concepts, not administrative entities.[1]

The Han Dynasty was the first to formalize the zhou into actual administrative divisions by establishing 13 zhou all across China. Because these zhou were the largest divisions of the China at the time, they are usually translated as "provinces". After the Han Dynasty, however, the number of zhou began to increase. By the time of the Sui Dynasty, there were over a hundred zhou all across China.

The Sui and Tang dynasties merged zhou with the next level down, the commanderies or jùn(郡). The Tang also added another level on top: the circuit or dào (道). Henceforth, zhou were lowered to second-level status, and the word becomes translated into English as "prefecture".[citation needed] Thereafter, zhou continued to survive as second- or third-level political divisions until the Qing Dynasty.

The Republic of China abolished zhou altogether, leaving the word only in the names of cities such as Guangzhou and Hangzhou. The People's Republic of China recycled the name, using it to refer to the autonomous prefectures granted to various ethnicities.