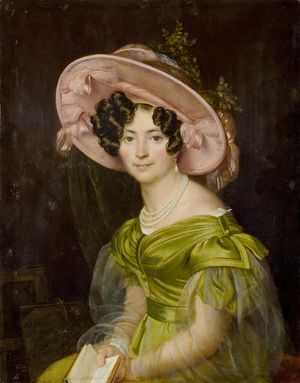 A portrait by Orest Kiprensky

She was an important figure in 19th-century Russian cultural life. As an amateur opera singer, she performed in Paris and London.

She was born in Turin where her father, Prince Alexander Beloselsky-Belozersky, was the Russian ambassador, descending in the male line from the medieval rulers of Kievan Rus, from the founder of Russia (Rurik) and ending as rulers of Belozersk and White Lake City. Her mother was a Tatischev, also of Rurikid ancestry.

Zinaida was lady-in-waiting to Queen Louise of Prussia in 1808 and was close to Emperor Alexander I of Russia, who became her lifelong correspondent and, possibly, lover. To stem gossip, Zinaida married Alexander's aide-de-camp, Prince Nikita Volkonsky, in 1810. They were prominent during the Congresses of Vienna and Verona.

She moved to Russia in 1817, and to Moscow in 1822. In the 1820s the "Corinna of the North" hosted a literary and musical salon on Tverskaya Street in Moscow, in a mansion later rebuilt into the Yeliseyev food store. Adam Mickiewicz, Yevgeny Baratynsky, Dmitry Venevitinov, and Alexander Pushkin frequented her house. Pushkin's verse epistle to her, "The queen of music and beauty", is well known. 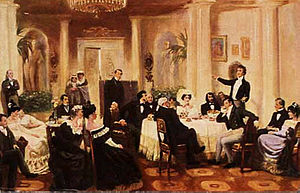 After Alexander I's death her brother-in-law Sergey Volkonsky led the Decembrist Revolt against his successor Nicholas. The Decembrists were exiled to Siberia, and their wives decided to follow them. Zinaida threw a farewell party for these women, incurring the displeasure of Nicholas I. She also came under suspicion as a secret convert to Catholicism and possible Jesuit agent.

These pressures led to Zinaida's moving to Rome in 1829. She was accompanied by her son and Stepan Shevyrev, the son's tutor. Among her lodgings in Rome were Palazzo Poli, Villa Wolkonsky, and a smaller house in the Via degli Avignonesi. Her salon was frequented by Karl Brullov, Alexander Ivanov, Bertel Thorvaldsen, Vincenzo Camuccini, Stendhal, and Sir Walter Scott. Nikolai Gogol wrote much of Dead Souls at her villa.

Princess Volkonskaya died of pneumonia (apparently after giving her warm cloak to an old street woman) and was buried at Santi Vincenzo e Anastasio a Trevi . An English-language biography by Maria Fairweather, Pilgrim Princess: A life of Princess Zinaida Volkonsky,[1] made its appearance in 1998.