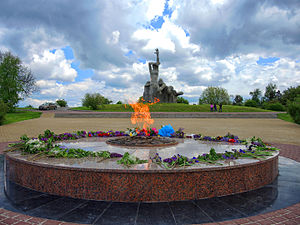 The Jewish men of Rostov were marched to Zmiyovskaya Balka, a ravine outside the city, and shot. The women, children and elderly were gassed in trucks, and their bodies buried in the same ravine. Communists and Red Army soldiers also were killed and buried there, along with their families.[3] Among those murdered at Zmiyovskaya Balka was the pioneering psychologist Sabina Spielrein.

Zmiyovskaya Balka, which means "the ravine of the snakes", has become the site of annual memorial ceremonies.[4]