From Infogalactic: the planetary knowledge core
Jump to: navigation, search
For the Russian monthly magazine, see Znamya. For the organ of the Union of the Russian People established in 1905, see Russkoye Znamya (newspaper).

Znamya ("Banner", Russian: Знамя) is a newspaper established by ultra-nationalist Black Hundreds journalist Pavel Krushevan in Petersburg. It is known for publishing of the "Protocols of the Elders of Zion" in August—September 1903.[1]

There is no consensus regarding the start time of the newspaper. The main source of controversy is "Brockhaus and Efron Encyclopedic Dictionary", a Russian analogue of 1911 Encyclopædia Britannica. 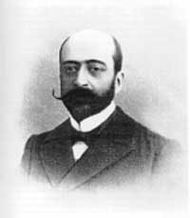 Given the fact that the issues containing the scandalous publication of "Protocols of the Elders of Zion" came out in print in August–September, the assertion about the end of 1903 is a misprint. An additional indirect indication favouring this assumption is the numbering of these issues (nn.190–200). De Michelis and Richard Newhouse also claim that "the Nilus version with its preface was published for the first time in the St.Petersburg newspaper Znamja (1903)".[1]

As for the discrepancy between the "end of 1902" and the "beginning of 1903", it is a trivial case for dating events in the pre-revolutionary Russian Empire. Only in 1918 did the Bolsheviks abandon the Julian calendar (which already lagged behind in the 20th century by 13 days) and introduce the Gregorian calendar, as in USA and Europe.[citation needed]

Minor controversy may arise due to confusion caused by the similarity of the names of newspapers, which were subsequently founded by the same Pavel Krushevan, and which reflected in that or another way his same anti-Semitic bias. These are the above-mentioned "Znamya" (end 1902 — 1903) and "Russkoye Znamya" ("Russian Banner", Russian: Русское Знамя, 1905 — 1917).[citation needed]

Main article: The Protocols of the Elders of Zion

The text was serialized into nine issues, each carrying a headline "The Jewish Programme of the Conquest of the World" (Russian: Программа завоевания мира евреями). Actually the document itself was entitled "The Protocols of the Sessions of the World Alliance of Freemasons and of the Sages of Zion", however by giving such a headline the editor anticipated, if not imposed, perceptions and conclusions of the readers.