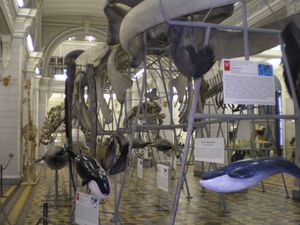 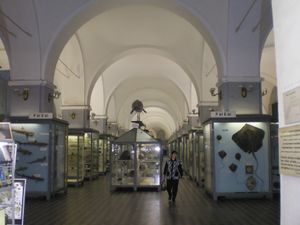 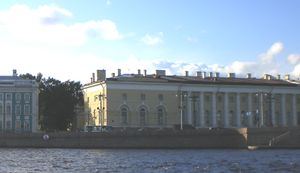 The building of the museum (on the right) 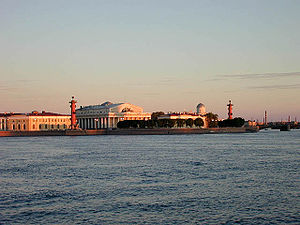 The southern warehouse is in the left

Lua error in Module:Coordinates at line 668: callParserFunction: function "#coordinates" was not found. The Zoological Museum of the Zoological Institute of the Russian Academy of Sciences is a Russian museum devoted to zoology. It is located in Saint Petersburg, on Universitetskaya Embankment. It's one of the ten largest nature history museums in the world.

Peter the Great's Kunstkamera collections included zoological specimens. In 1724 the museum became a part of the Russian Academy of Sciences. A printed catalogue of the contents was published in 1742. It listed the zoology, botany, geology and anthropology specimens and contained an album of etchings of the building and plan of some of its parts. In 1766 Peter Simon Pallas, member of the Russian Academy of Sciences, was appointed Curator of Zoology. In 1832 the zoological collections were split from the Kunstkamera and in 1896 moved nearby to its present location in the former southern warehouse of the Saint Petersburg bourse (constructed in 1826-1832). In 1931 the Zoological Institute was established within the Academy of Sciences, which included the museum.

In the front hall of the museum, with the monument to Karl Ernst von Baer by the entrance, the exhibition of the zoological collection of the Kunstkamera acquired by Peter the Great in the early 18th century is located, as well as skeletons of cetaceans, including the enormous 27 m long blue whale in the middle of it, and mounted pinnipeds. In the gallery above the front hall the entomological collection is displayed. The second and third halls form a long passage with systematic collections and dioramas dating back to the early 20th century and are situated to the left of the front hall. The second hall hosts the collection of fishes, amphibians, reptiles, birds and invertebrates, mounted or preserved in formalin, and their skeletons or shells. The collection of mammals, including woolly mammoths, is displayed in the third hall.