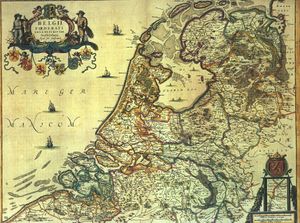 Historical map of the Netherlands (1658) with De Zuyder Zee'

The Zuiderzee (Dutch: [ˌzœy̯dərˈzeː]; old spelling Zuyderzee) was a shallow bay of the North Sea in the northwest of the Netherlands, extending about 100 km (60 miles) inland and at most 50 km (30 miles) wide, with an overall depth of about 4 to 5 metres (13–16 feet) and a coastline of about 300 km (200 miles). It covered 5,000 km2 (1,900 sq mi). Its name means "southern sea" in Dutch, indicating that the origin of the name can be found in Friesland to the north of the Zuiderzee (cf. North Sea).[citation needed] In the 20th century the majority of the Zuiderzee was closed off from the North Sea (leaving the mouth of the inlet to become part of the Wadden Sea) and the salt water inlet changed into a fresh water lake called the IJsselmeer (IJssel Lake) after the river that drains into it, and by means of drainage and polders, an area of some 1,500 km2 (580 sq mi) was reclaimed as land. This land eventually became the province of Flevoland, with a population of nearly 400,000 (2011).

In classical times there was already a body of water in this location, called Lacus Flevo by Roman authors. It was much smaller than its later forms and its connection to the main sea was much narrower; it may have been a complex of lakes and marshes and channels, rather than one lake. Over time these lakes gradually eroded their soft peat shores and spread (a process known as waterwolf). Some part of this area of water was later called the Vlie; it probably flowed into the sea through what is now the Vliestroom channel between the islands of Vlieland and Terschelling. The Marsdiep was once a river (fluvium Maresdeop) which may have been a distributary of the Vlie. During the early Middle Ages this began to change as rising sea levels and storms started to eat away at the coastal areas which consisted mainly of peatlands. In this period the inlet was referred to as the Almere, indicating it was still more of a lake, but the mouth and size of the inlet were much widened in the 12th century and especially after a disastrous flood in 1282 [1] broke through the barrier dunes near Texel. The disaster was the making of the little village of Amsterdam, for seagoing traffic could now make it a rendezvous for the Baltic trade. The even more massive St. Lucia's flood occurred 14 December 1287, when the seawalls broke during a storm, killing approximately 50,000 to 80,000 people in the fifth largest flood in recorded history. The name "Zuiderzee" came into general usage around this period.

The size of this inland sea remained largely stable from the 15th century onwards due to improvements in dikes, but when storms pushed North Sea water into the inlet, the Zuiderzee became a volatile cauldron of water, frequently resulting in flooding and the loss of ships. For example, on 18 November 1421, a seawall at the Zuiderzee dike broke, which flooded 72 villages and killed about 10,000 people. This was the Second St. Elizabeth's Flood: see Sint-Elisabethsvloed (1421).

The Netherlands was part of the First French Empire between 1810 and 1813. A département was formed in 1811 and named as Zuyderzée after the Zuiderzee, of which the territory roughly corresponded to the present provinces of North Holland and Utrecht.

Zuiderzee hosted the 6-meter and 8-meter sailing events for the 1928 Summer Olympics held in neighboring Amsterdam.[2] 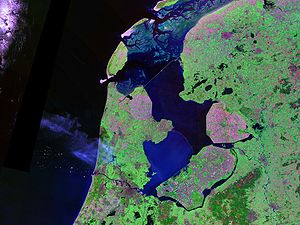 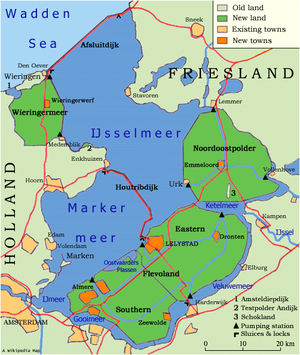 Map of the Zuiderzee Works in the Netherlands

Around the Zuiderzee many fishing villages grew up and several developed into walled towns with extensive trade connections, in particular Kampen, a town in Overijssel, and later also towns in Holland such as Amsterdam, Hoorn, and Enkhuizen. These towns traded at first with ports on the Baltic Sea, in England, and in the Hanseatic League, but later also with the rest of the world when the Netherlands established its colonial empire. When that lucrative trade diminished, most of the towns fell back on fishing and some industry until the 20th century when tourism became the major source of income. Contained within the Zuiderzee were five small islands, the remains of what were once larger islands, peninsulas connected to the mainland, or in the case of Pampus, an artificial island. These were Wieringen, Urk, Schokland, Pampus, and Marken. The inhabitants of these islands also subsisted mainly on fishing and related industries and still do in the case of Urk and Wieringen. All of these islands, except for Pampus, are now part of the mainland or connected to it.

The construction in the early 20th century of a large enclosing dam (the Afsluitdijk) tamed the Zuiderzee. The creation of this dam was a response to the flood of January 1916. Plans for closing the Zuiderzee had been made over thirty years earlier but had not yet passed in parliament. With the completion of the Afsluitdijk in 1932, the Zuiderzee became the IJsselmeer, and large areas of water could be reclaimed for farming and housing. These areas, known as polders, were respectively the Wieringermeer, the Noordoostpolder, and Flevoland. This enormous project under the direction of Cornelis Lely, called the Zuiderzee Works, ran from 1919 to 1986, culminating in the creation of the new province of Flevoland. The reclamation project was originally intended to reclaim the former southwestern portion of the Zuiderzee, a polder that would have been called the Markerwaard, but this final stage of the reclamation project was indefinitely postponed in the 1980s.